In a career filled with some of the most loved and groundbreaking films of all time, there is little argument that “Mary Poppins” is Walt Disney’s crowning cinematic achievement. A timeless classic, beloved by old and young alike, “Mary Poppins” was the one film that brought together everything Walt Disney did so well. It has amazing songs by the Sherman brothers, wonderfully imaginative animated sequences, and a heartfelt emotional story. Walt even managed to get an audio-animatronic bird in there. And yet, it was a battle to get permission to make the movie.

That’s the story told in the wonderful new Walt Disney Studios film “Saving Mr. Banks.” Walt Disney (played by the always likable Tom Hanks) had been trying to convince the author of Mary Poppins, P.L. Travers (Emma Thompson), to sell him the rights to her story for 20 years. “Saving Mr. Banks” takes place in 1961 when Mrs. Travers (as she insists upon being called) reluctantly agrees to visit Los Angeles so that Walt can try to get her to grant him the rights to make “Mary Poppins” – which the studio has already started pre-production on.

Pam (as Walt insists on calling her) couldn’t be more different than Walt. She’s dour, pessimistic, and perpetually miserable. Every attempt to charm her fails. Convincing her to release the rights is not easy, providing the film with drama and humor.

“Saving Mr. Banks” crosscuts between 1961 and Mrs. Travers’ childhood in Australia. The flashback scenes show a child full of wonder and life, creating a curious mystery surrounding how she ultimately became the woman she did. Through the course of the movie, we learn that answer, and it pays off beautifully.

Performances are all top-notch. Emma Thompson is fantastic, somehow managing to make such a miserable person relatable and likable. During the film’s press conference last week, Thompson conjectured on why audiences will like P.L. Travers in the film: “Is it not rather nice for all of us who have been so well brought up, and we’re all so bloody polite all the time, Americans particularly, to see someone being rude? It’s bliss, isn’t it?”

More of Thompson’s comments, with a bit from Hanks, in this short video:

Many have had concerns with the casting of Tom Hanks as Walt Disney, the first time the famous figure has been played in a feature film – but Hanks pulled it off. Yes, it’s still Tom Hanks on screen. He never really disappears into the role, but he does capture that “Uncle Walt” quality perfectly. His voice and look aren’t spot on, but the spirit of Walt is in there. 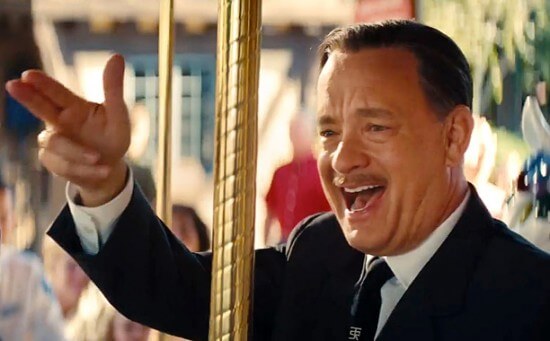 Hanks talked about how he researched the role by spending hours watching old footage at the Walt Disney Family Museum in San Francisco. “The only handicap there was that a lot of it is Walt Disney playing Walt Disney,” said Hanks. So he relied a lot on anecdotal stories from people who knew and worked with Walt personally. “He believed everything he said about his projects. He completely embraced the possibilities of wonder … I had a great roadmap to search it out.”

And what’s a film about Walt Disney without a bit of Disneyland? Director John Lee Hancock recalled the magic of shooting in the park, the first time any major Hollywood film has done so since – strangely enough – Tom Hanks’ “That Thing You Do” in 1996. “Being there on Main Street before the park opened and the sun is just coming up, and everybody is moving stuff around, and I remembered a moment there where I thought, ‘Damn. This is cool. I’ve got a great job.’ And then I look over, and there’s Tom, and it’s Walt Disney. It’s all too great. It was fantastic.” 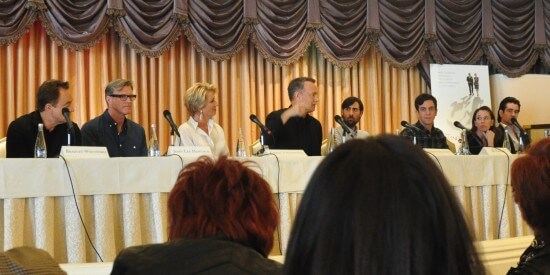 The rest of the film’s cast is terrific as well. Jason Schwartzman and B.J. Novak are pitch-perfect as songwriters Richard and Robert Sherman and, with Bradley Whitford as screenwriter Don DaGradi, provide some of the movie’s funniest moments during story meetings with Mrs. Travers. Paul Giamatti as Mrs. Travers’ driver, also does a fine job. 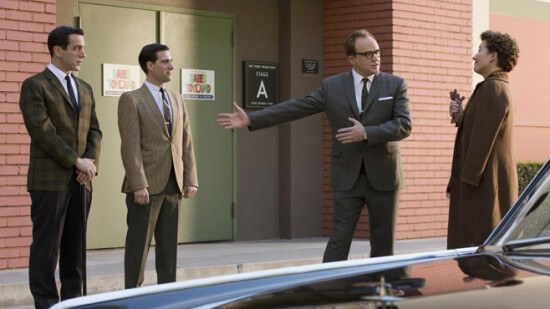 But the best performance of the movie is surprising, artfully delivered by Colin Farrell as Mrs. Travers’ father. He brings amazing range and emotion to this man, simultaneously a loving, sweet father and a man caged in my life and personal demons. The Academy should recognize his performance.

“Saving Mr. Banks” is a movie about Disney history that Disney fans have been waiting for. It’s tremendous, heartfelt, and sweet without being overly sappy or cheesy. Audiences will be crying by the end.

See it when it opens on December 20th. I’ll be there to watch it again.