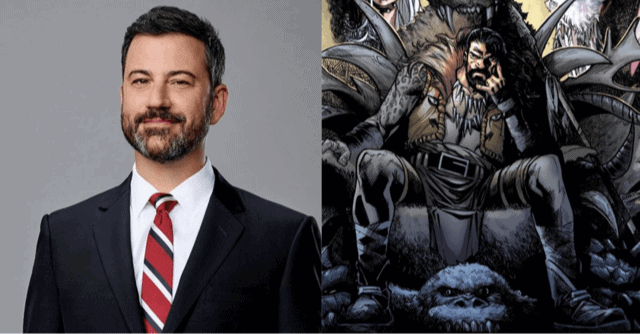 There has been a lot of movement around the development of the Spider-Man 3 film that is currently in production. Recently, we’ve learned that another member of the already star-studded cast has been confirmed, we think.

Late night host, Jimmy Kimmel might be making his first debut in the Marvel Cinematic Universe. Kimmel will be playing the role of Kraven the Hunter also known as Sergei Kravinoff in Spider-Man 3. Kimmel took to his Twitter to announce the news.

The next Spider-Man installment is currently filming in New York under the working name ‘Serenity Now‘. This film has already confirmed a number of actors to appear in the movie. So far, Benedict Cumberbatch is confirmed for this film as his Dr. Strange role. Jamie Foxx will also be reprising his role Electro from The Amazing Spider-Man 2 with Andrew Garfield.

So even though Kimmel’s tweet is creating a lot a skeptical buzz as a possible marketing tool- the confirmation could be true. Fans of the Jimmy Kimmel Live! show know that Kimmel and Tom Holland often collaborate for big Spider-Man reveals. This is what is leading fans to question this announcement. If this so happens to be true, it could shock a lot of Marvel fans who love the franchise.

Kraven the Hunter is a big villain in the Spider-Man franchise. Picturing Jimmy Kimmel’s comical demeanor in a role like this can be quite a stretch but not completely impossible. Marvel’s description of Kraven the Hunter states as follows:

Kraven was a maniacal big game hunter who sought to defeat Spider-Man to prove that he was the greatest hunter in the world. Unlike other hunters, he typically disdained the use of guns or bow and arrows preferring to take down large dangerous animals with his bare hands even though he often made elaborate preparations to weaken a quarry before hand. He also used a mystical serum to give him similar strength to Spider-Man, but even without the serum he was a threat to the wall-crawler. However, Kraven’s continual underestimation of the superhero’s resourcefulness made him a frustrating quarry.

Could you see Jimmy Kimmel as a villain in Spider-Man 3? Let us know in the comments!