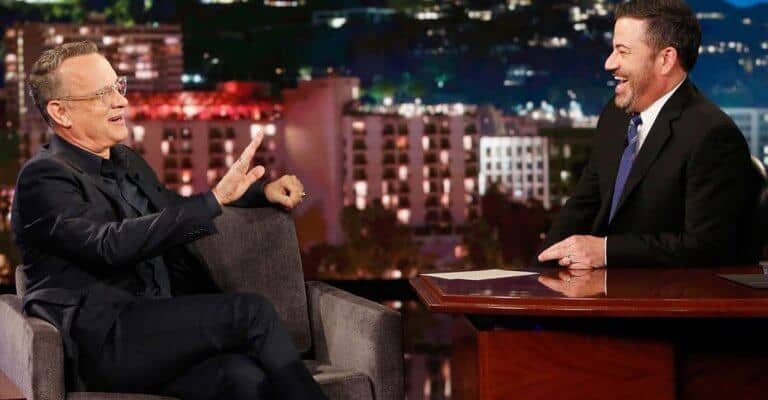 “Toy Story 4” hits theaters this week, but all we know so far is what Disney wants us to know. At least, that’s what Tom Hanks shared. The actor, who stars as Woody in the upcoming film, recently sat down with Jimmy Kimmel and shared the strict rules that he has to abide by when sharing information about “Toy Story 4” during the press tour. And by the sound of it, Hanks can’t say much.

“I have these talking points that Disney gives you at the beginning of the press junket thing and these things are like Gutenberg Bible stuff,” Hanks said during his visit to Jimmy Kimmel Live! last Thursday. “Look at how many times I’ve studied them… I’ve spilled some tomato juice on it at one point.” Hanks held up holding two sheets of paper that outlined what he is and isn’t allowed to say to the media.

“They also give you sample questions, which you have yet to ask my friend,” Hanks added, while poking fun at Kimmel. “This is both for me and Tim Allen.” An example question included: “Can you talk about how Buzz is learning to listen to his inner voice?” The actor explained that Disney provided a thoughtful answer to say when asked about the character of Bo Peep, who has gotten a lot of attention from the media since Disney-Pixar revealed her new look for “Toy Story 4.” “Bo Peep should be described as a strong character from the beginning. Her recent experience perhaps made her strong, but she was never a weak character,” he recited from the sheet of paper.

As you can see from his interview with Jimmy Kimmel, Hanks seems to have a lot of fun sharing his guidelines for the press tour. But he also doesn’t forget to admit that sharing this much information about what he can and can’t say could potentially get him in trouble with Disney.

“Do you know how many executives right now want to kick my ass because I brought this out? They have an entire division over there. It’s called Disney Corporate Vertical Integration Marketing Division,” Hanks said.

Either way, Hanks didn’t forget to share his overall thoughts on “Toy Story 4.” Like so many “Toy Story” fans, we’ve been itching to find out just how this movie would turn out in theaters. It’s been so long since “Toy Story 3” (what we thought would be the last film) was released that “Toy Story 4” almost feels like the start of a new series. But if Hanks’s opinion is any indication of the film’s quality, we surely won’t take it for granted.

“I know it sounds ridiculous because I’m in it, but it’s one of the best movies I’ve ever seen in my life,” he said to Kimmel.

We trust you, Woody. Although you might want to tone down how much information you share next time.

You can watch Hanks’s interview with Jimmy Kimmel in the video below.

Are you excited to watch Hanks as Woody in “Toy Story 4” when it hits theaters on June 21? Let us know in the comments!