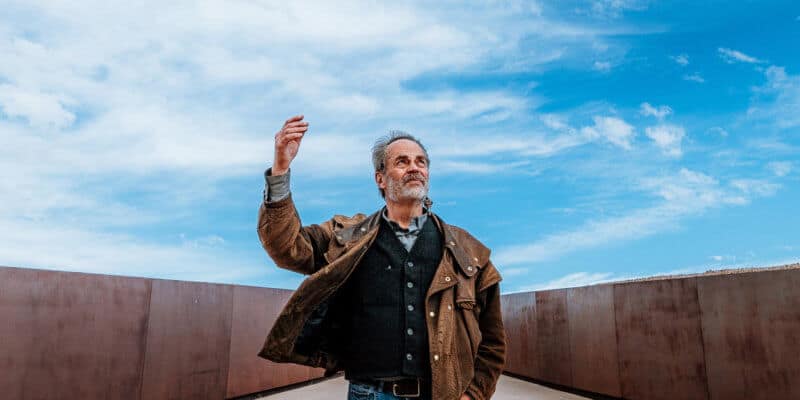 Beloved Disney Imagineer Joe Rohde, who was known for his work on Disney’s Animal Kingdom as well as other projects, announced his retirement from The Walt Disney Company late last year. Rohde’s last day at Walt Disney Imagineering was on January 4, 2021.

Now, it looks like the former Disney Imagineer has found work elsewhere — with Virgin Galactic.

During the interview, Joe Rohde stated:

My name is Joe Rohde, um, I’ve just joined the Virgin Galactic team. I come from a long history with Walt Disney Imagineering — 40 years. I have worked for a long time in projects that involve this sort of transformational power of adventure. To go somewhere you have never been, to do something you have never done, see something you’ve never seen, changes you.

Well this is one of the most profound things that can happen to you. To go beyond the reaches of the Earth into space and to look back down at it is a spectacularly unique opportunity with a huge potential for transformational change in a person.

Rohde continued to discuss Virgin Galactic and his excitement for joining the team, saying:

And what Virgin Galactic is in the process of doing with democratizing space travel has reached this moment now where it’s gonna enter history. That only happens once. It happens once in history. It’s happening now. It’s happening here. So this place where we are, here in New Mexico, has two meanings. It is New Mexico — a place that’s been here for centuries with cultures that go back as far as we can measure. It is also the place from which this new history is gonna begin.

It’s very rare to be a person who gets to be in the place in the time when history begins like that. So if you accept that this change is positive and that this will motivate people and drive people to take action on behalf of this planet that they look down on, you’re creating a machine for, um, epihanies, a machine for activism, a machine for social action that is just producing heroes, one after another after another as it sends them up into space — Gives them this incredible experience and then returns them back with a directed sense of purpose and action to do something about this — To do something on behalf of the gem that you’ve been privileged to look down at.

You can check out the announcement from Virgin Galactic here:

Virgin Galactic shared the following information about Rohde’s new position on their team:

With preparations underway for the first Future Astronauts to arrive at Spaceport America, Virgin Galactic has brought in Joe Rohde as a strategic advisor to help design and guide the overall experience journey for future astronauts, friends and family, and inspired fans alike.

Joe will become Virgin Galactic’s first Experience Architect, bringing more than 40 years’ experience from Walt Disney Imagineering where he led projects that transformed the image of Disney’s iconic experiences and attractions. Rohde is truly a transcendent creator whose design work leverages careful detailed composition to create authentic and remarkable experiences. The work he is starting will stimulate curiosity, guide the imagination, and anchor the Virgin Galactic customer experience with purposefulness and meaning.

More on Joe Rohde’s Time With The Walt Disney Company

When Rohde announced his retirement, D23 shared the following information regarding his time with Disney Imagineering:

It’s been a wild ride for Walt Disney Imagineering’s Joe Rohde, who has spent more than 40 years bringing to life some of Disney Park’s most iconic experiences and attractions. Starting as a model designer on EPCOT, Rohde has since overseen projects such as Disney’s Animal Kingdom Park; Aulani, A Disney Resort and Spa; Expedition Everest; and Pandora: The World of Avatar. […]

D23 continued to explain how Rohde has impacted everyone at The Walt Disney Company over his 40-year career, writing:

Throughout his career with Walt Disney Imagineering, Rohde has always been a friend of D23, speaking at panels at the D23 Expo and Destination D, joining us for events such as the opening ceremony of Pandora the World of Avatar, and helping us celebrate the fifth anniversary of Aulani, A Disney Resort and Spa.

Rohde took to Instagram to announce his retirement last year as he reflected on his 40-year career with Walt Disney Imagineering:

I’m sure by now many of you have come across the news that I am retiring from Walt Disney Imagineering. It has been 40 years since I stepped foot in the door at age 25, not knowing anything about theme parks, Disney, or what it meant to work for a big company. Every day of my life since then has been a learning experience,” Rohde wrote. “I’m very glad to have had that opportunity, and proud of the work that has been done, not just by me, but by all my fellow Imagineers, and especially those who worked by my side over the decades. But 40 years is a long time, and this strange quiet time seems like a great opportunity to slip away without too much disruption. If I wait, I will once again be in the middle of another huge project and by the time that is done, I would be truly old.

Are you excited to see Rohde continue his work with Virgin Galactic? Let us know in the comments below.