A Wild Time: Joe Rohde Reflects on His Work and Legacy at Animal Kingdom - Inside the Magic 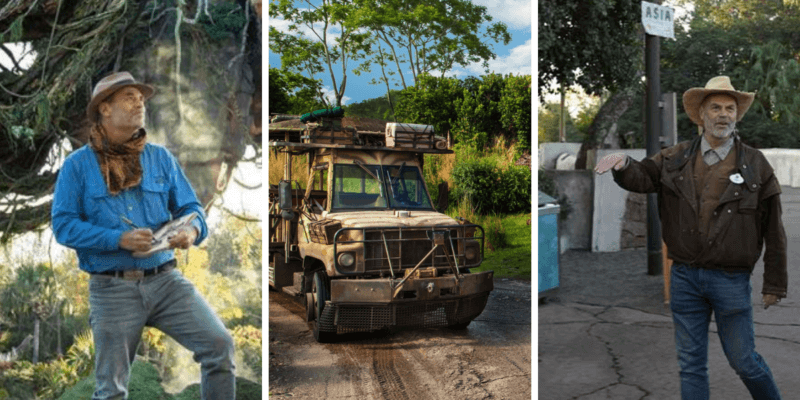 On January 7th, Disney’s D23 released an exclusive interview with Disney Imagineer Joe Rohde. In this interview, Rohde reflects on his forty years with the Walt Disney Company. Joe Rohde announced his retirement in November of last year. In his time with the company, Rohde has worked on too many Imagineering projects to name. He is most notable for his work at Disney’s Animal Kingdom. Because Animal Kingdom is such a deep part of his time with the company, D23 asked Rohde about his time, work, and memories in the theme park. Joe Rohde reflects on these aspects of his career and more in the full D23 podcast, which you can listen to here. Below, we have highlighted some of the best Animal Kingdom moments for you from Rohde’s reflections.

Involvement in Animal Kingdom and How the Park Came to Be

Joe Rohde explained to D23 that when he started with the company, he did not know much about Disney, so he preferred to work on projects that did not have to do with Disney intellectual properties. Rohde is know for being as authentic as possible, heavily researching the cultures and connections he embedded into his attractions and park areas. D23 asked how he came to be involved in projects like Animal Kingdom. Rohde said:

“It started with Animal Kingdom… Of course, no theme park had ever been based on animals, and the rulebook for how to do a theme park didn’t match up very well with animals. So it really started with the analysis of how could we ever take this system—the theme park system and everything that it represents—and what would we have to modify and change to get it to work with animals. And one of the things that was going to have to happen was a very serious commitment to wildlife conservation. If you want to do this, there is no way to do it without making a serious commitment to education and conservation.”

“So that set some wheels in motion for a design culture that was really based on research, based on science, based on collaborating with people outside the Company who had knowledge and interests separate from our own. That made it possible to do a category of work that wasn’t really based on our own intellectual property, it’s really based on ideas that come from the world.”

Today, people from around the world are inspired by Animal Kingdom to conserve and care for nature and wildlife. With the Wilderness Explorer’s adventure for children and opportunities to see the beauty of nature, the park reaches out to those of all ages. It’s as if the park represents Nature reaching out its hand to Humanity, imploring us to convene with it and honor its existence. Joe Rohde acted as Disney guest’s ambassador to Nature, bridging the gap between us and our roots in this beautiful theme park.

Since Joe Rohde is Disney’s nature and wildlife expert, it only make sense that he would be the leader for the Pandora expansion at Animal Kingdom. However, when first approached with the idea, he thought it was “crazy,” according to D23. He knew it would be difficult to develop the technology and create the world with raw materials because of the movie’s concepts of floating mountains, 12-foot tall native inhabitants, and poisonous atmosphere. Yet, he knew that Avatar has the same underlying thematic goals as Animal Kingdom. As he told D23, he spoke with Cameron and other Avatar creators to decide how to approach making the new land. He told Cameron:

James Cameron agreed. “There is still something to discover,” Rohde says to fans who have seen Avatar time and time again, since the land tells its own story. Many Disney fans have discovered Pandora since its opening. Pandora truly gives new life to Animal Kingdom in a way that no expansion ever has before. This land fits so seamlessly into the park that it feels like it has always been there.

Sorry, Disney Parks fans. This isn’t a memory we will be able to recreate, but that’s what makes it beautiful to Rohde. In his interview with D23, Joe Rohde reminisces about his favorite Disney memory. Animal Kingdom was still under construction, untouched by park guests and even the animals that would call it home.

The savannah for Kilimanjaro Safari was completed, but the Florida wildlife still lived there before the African animals were brought in. Millions of tadpoles and tons of birds were on the reserve. Joe used to ride his mountain bike along the ride path of Kilimanjaro Safari through this savannah area, immersing himself in nature. Of this memory, he says:

“This is a thing that not only I, but nobody, will be able to ever do again. Ever. In the history of the park. Once this starts. It was so real-seeming and really magical and really beautiful and very, very special thing that I think is really, truly one of my favorite memories of my career.”

I think many Disney Cast Members can relate to this idea of living in an indescribable moment of magic that no park guest, or maybe no one else ever as in Rohde’s case, will experience the magic in that same way. However, Disney’s Animal Kingdom is so special because it opens this opportunity for unique experiences to all. Animal Kingdom gives its guests many moments that no one else will ever experience due to the animals that live in the theme park. Thanks to Joe Rohde and other amazing Disney Imagineers, we as Disney Parks guests at Animal Kingdom can connect with nature and animals through the façade of a tame theme park with attractions and animal cast that are anything but tame.

Joe Rohde certainly was as wild in creativity as the animals he brought into the canon of Disney Parks. Disney fans everywhere will be forever grateful for his contribution to Disney’s theme parks and the Disney magic they bring us. We will be especially thankful that we can have a wild time at Disney’s Animal Kingdom, given its spark by Rohde and Disney’s team of creative Imagineers.

Do you plan on visiting Disney’s Animal Kingdom soon? Contact our friends over at Academy Travel for a free quote on your Disney vacation. They can plan for you to have a wild time or peacefully saunter through the Animal Kingdom.

Did you enjoy listening in as Joe Rohde reflects on his time with Animal Kingdom? Let us know in the comments!

Comments Off on A Wild Time: Joe Rohde Reflects on His Work and Legacy at Animal Kingdom