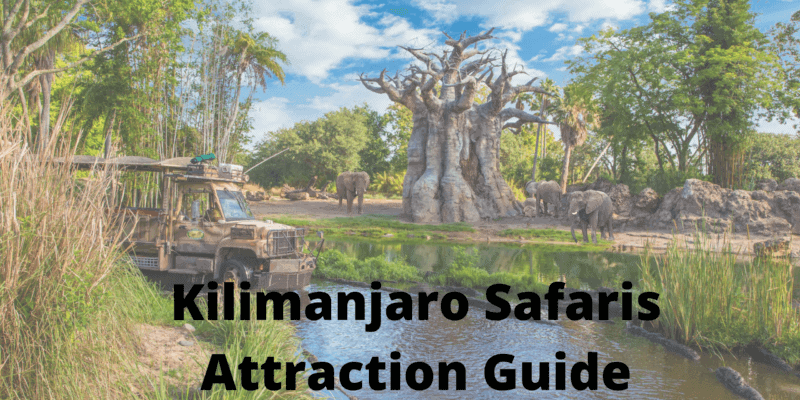 In this guide to one of Disney’s Animal Kingdom’s most popular attractions, we are going to take you through everything you need to know about the ride. From its incredible history to answering some of the most important questions that guests have on the attraction, we’re covering it all in our Attraction Guide to Kilimanjaro Safaris at Disney World.

If you wanted to jump to a specific section, just click on one of the links below:

What is Kilimanjaro Safaris?

Kilimanjaro Safaris is Disney’s attempt at creating a real safari experience in a theme park. It’s a huge attraction spanning 110 acres and home to 34 different species of wildlife. The entire attraction was designed from the ground-up to look just like a real African reserve and this illusion starts as soon as you get into the queue for the attraction.

You can find Kilimanjaro Safaris within Africa at Disney’s Animal Kingdom theme park, right toward the back of the park.

Believe it or not, Walt Disney helped to inspire the attraction, despite passing away many years before the Imagineers came up with the idea for the attraction.

When designing Disneyland, Walt Disney always wanted to use live animals for the Jungle Cruise. Thankfully this wasn’t allowed at the time, otherwise we would never have gotten the classic Jungle Cruise attraction, which is widely considered one of the best at the Disney Parks.

The Kilimanjaro Safaris attraction owes a lot to legendary Imagineer Joe Rohde who headed up the design for Disney’s Animal Kingdom and worked on the attraction, getting it ready for the parks opening date over 20 years ago on April 22, 1998.

The original story for the attraction taught guests about the dangers of poaching and the impact it had on animals in the African Savannah. The original poaching storyline was actually far more intense than guests ended up seeing a dead corpse of Little Red’s mother. This was removed before the grand opening of the ride and replaced with the happy reunion between the two animals.

In 2012 the story of “Little Red” the elephant was dropped in favor of a new section of the attraction, a Zebra exhibit.

Though nighttime safaris were originally introduced as far back as 1998, the additional costs and poor visibility of animals meant that they just weren’t feasible until technology changed. Thankfully the Imagineers reintroduced nighttime safaris back in 2016 when hyenas were brought to the reserve.

FastPass+ is available for the Animal Kingdom safaris attraction. Kilimanjaro Safaris is one of the busiest attractions at Disney’s Animal Kingdom and is, therefore, an attraction you are likely going to want to get a FastPass for.

Your Questions Answered on Kilimanjaro Safaris

How long does Kilimanjaro Safaris take to experience?

This is one of the longest attractions at Walt Disney World, with the average safari taking around 20 minutes from when you first set off.

There’s an average because there are times where it can be a lot longer or shorter, it all depends on whether or not an animal sits down in front of your safari truck!

What are the height requirements?

Great news: there are no height restrictions at all for Kilimanjaro Safaris! This means you can board with all of your Junior Wilderness Explorers — just make sure they sit toward the inside of the vehicle.

Are the animals in Kilimanjaro Safaris real?

You’d be surprised at how much we hear this question! Every animal that you can see is a real animal that lives in Disney’s Animal Kingdom. The only exception to this is the termite mounds you see, these are used to hide treats for the animals. Oh, and while the Ostriches you see on the attraction are real, the eggs that are ALWAYS by the roadside are made of concrete.

Many guests assume that the attraction is on a track. These are real custom built GMC and Ford trucks that are actually being driven by the Cast Member that you see at the front of the attraction.

Cast Members go through rigorous training to be able to get a role on Kilimanjaro Safaris. The trucks are real because many Cast Members have had to stop, swerve and move for the numerous animals that wander the attraction. Remember, the animals have right of way!

Each night the safari trucks are driven off the road and into a lot where they are assessed and serviced ready for the next day at the park.

The trucks seat 3-5 guests to a row and while there is a cushioned back, there are no safety restraints (such as seat belts) on this attraction.

It is rare that the attraction will close due to weather.

A bit of rain won’t stop the attraction, but if there is a heavy storm it will result in the attraction having to temporarily close.

Does Kilimanjaro Safaris run at night?

Yes! Nighttime safaris were introduced back in 2016 and have been pleasing guests at Disney’s Animal Kingdom ever since.

What is a Nighttime Safari?

A nighttime safari is a great chance to see some of the animals on the reserve when they are a bit more active. Hyenas, in particular, are really active at night but many of the other species are also more comfortable at night thanks to the cooler temperatures.

The ride’s duration at night is slightly shorter than the day as the safari truck avoids areas where animals aren’t going to be visible.

No, Kilimanjaro Safaris is included in the cost of admission to Disney’s Animal Kingdom. Disney offers paid walking tours of the attraction that come at a cost but are well worth the money. Here’s Ryan taking one of the tours (Wild Africa Trek) last year:

Can you ride Kilimanjaro Safaris when pregnant?

The official response from Disney is that the attraction isn’t suitable for expectant mothers.

That being said, this is certainly one of the tamer rides that sit within this bracket. You need to assess every scenario and what works well for you. There are many Disney fans that will tell you the first trimester won’t be an issue but do your own research and remember the warning is there for a reason.

What animals are on Kilimanjaro Safaris?

Here are just some of the animals you can expect to see when riding Kilimanjaro Safaris:

What is the best time to ride Kilimanjaro Safaris?

While the rest of the park is running (or fast walking) to Flight of Passage in the morning at rope drop, wander over to Africa just as the park opens and you will get one of the best rides of the day.

Many of the animals like to take cover from the intense Florida heat during the course of the day, so your best time to see active animals is typically right at the start of the day or as the sun is setting.

Based on the number of times we’ve been on Kilimanjaro Safaris (which is a lot), we’d say you’d likely have more luck seeing active animals in the morning.

Keep in mind that one of the major selling points of the attraction is that every ride experience differs!

What is the worst time of day to ride Kilimanjaro Safaris?

There’s not really a time where you aren’t going to see anything but as we said previously, many of the animals like to seek shelter from the sun during the middle of the day. Plan for a safari during the morning or evening if you can to stand the best chance of seeing the most amount of animals.

That being said, don’t let us discourage you from visiting during the day. We’ve had many safaris during the hottest hours of the day and they’ve still been fantastic and memorable.

Do you have further questions you want answering about Kilimanjaro Safaris? Ask us anything in the comments below and we will add the answer to our guide!