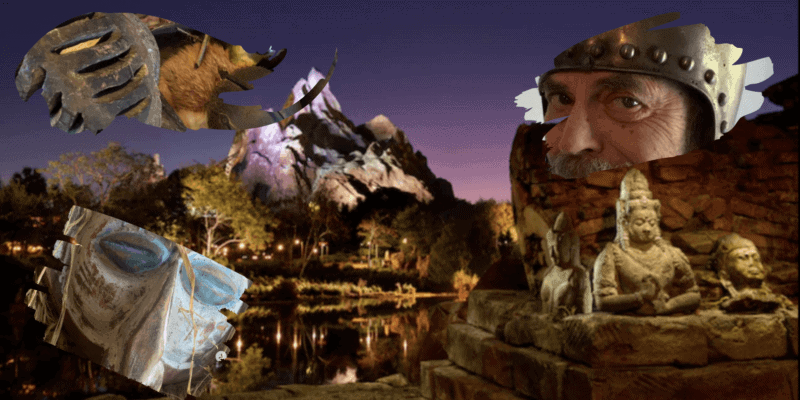 Imagineer Joe Rohde has had over a forty-year career with The Walt Disney Company.

This week, after announcing his retirement — effective January 4, 2021 — Rohde has been especially active on social media, sharing not only news about his departure but also about what lies ahead for him now.

Tonight, Rohde took to Instagram to share details about his latest venture: selling-off memorabilia and personal relics he has collected during his four decades with Walt Disney Imagineering.

Rohde, the creative force behind both Disney’s Animal Kingdom at Walt Disney World Resort and Aulani, A Disney Resort & Spa in Hawaii, has an extensive collection of, in his words, “funky ethnic stuff” from his travels to Asia, Africa, and around the world.

The official Instagram account for Joe Rohde’s online garage sale features photos and details about many of the items the Imagineering icon will be listing on eBay.

The items range widely, beginning with an authentic Balinese Barong mask, which Rohde describes, in part, as:

This mask was carved in the workshop of master carver and mask maker Ida Bagus Sutarja of Mas, back in the 80’s. His family is featured in the book Bali: the Ultimate Island, by Leonard Lueras. I met him through a friend on my first trip to Bali, in the mid80s. This mask is not strictly traditional, and his workshop was well known for experimenting with traditional forms. The detail above the eyes is a departure from strict traditional carving, But that is what makes this more than just a traditional artifact. It makes it a personal work of art.

Another item, with a hibiscus wood mask from Java as its original base, was crafted by Rohde himself — a very cool piece for any Walt Disney Imagineering fan to own! Rohde writes:

Nothing especially authentic about this mask. I made it myself. It is meant to look shamanic, but is not a copy of any particular tradition.

Yet another item that Rohde currently has listed for sale is this helmet, which Rohde says is a “movie prop…that funky little curly thing on top is what makes it resemble a Phrygian cap.”

One last item that is currently for sale is sure to interest Disney Parks fans. Rohde writes:

I bought this Bayaka mask way back when I was designing the Adventurers Club at Pleasure Island in Walt Disney World. A very similar mask is on display at Jambo House at Disney’s Animal Kingdom Lodge. This mask has been in my possession for about 35 years, and it is my understanding that it was not new at the time I bought it. I imagine it could be 40 to 50 years old, perhaps a couple decades older than that.

Undoubtedly, many of the products Rohde is listing inspired various areas of Disney’s Animal Kingdom as he conducted research for the popular Disney World theme park around the globe.

Visit the Rohde Garage Sale eBay shop so you don’t miss out on any of the Disney’s Animal Kingdom memorabilia and other items Rohde will be listing over the next several weeks as he gears up for his official retirement date.