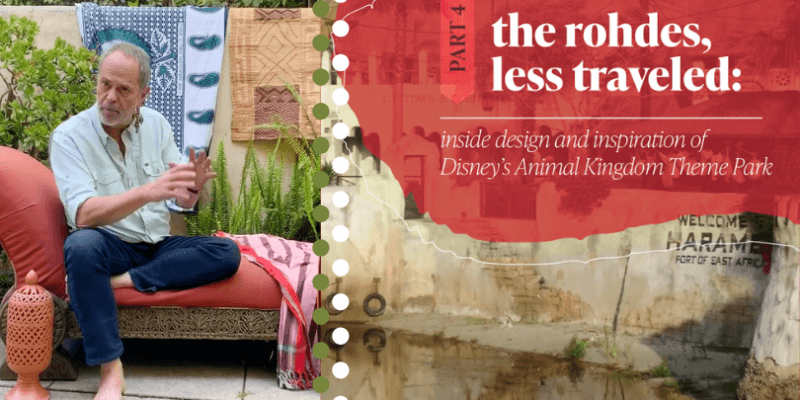 As a Disney fan, learning behind the scenes information about anything Disney Parks related is always interesting — which is why we love when Disney creates content like the short series — The Rohdes, Less Traveled.

Through this limited YouTube series, shared through the Disney Parks Blog #DisneyMagicMoments campaign, we are able to learn from well-known imagineer Joe Rohde. In each episode, Joe walks us through all sorts of interesting behind the scenes information regarding the making of Disney’s Animal Kingdom park in Walt Disney World.

The research that goes into making any theme park is extensive, no doubt. However, at Walt Disney Imagineering this process is taken to a whole other level.

Imagineers at Disney pride themselves on being storytellers along with engineering the technical aspects of the park and its design. They work to make sure the different parts of the parks and resorts are properly themed in order to authentically tell the story that they’re portraying to guests. This is especially true for Disney’s Animal Kingdom park, as its different lands are themed after real countries in the world.

In this episode of The Rohdes, Less Traveled, we are taken behind the scenes by Joe Rohde to learn about the influence that Swahili architecture had on the design of Disney’s Animal Kingdom park.

The Harambe village, found in the back of the park boasts a very specific style of architecture known best from ‘the coastal Swahili towns of West Africa.’ He explains how when deciding on a style for the buildings in this area of the park, they wanted to portray the architecture authentically so that it was true to the cultural design, while also being functional from a theme park operations standpoint.

They were wanting large square doors in the buildings for crowd control and flat surfaces that could have functional signs as well as designs, and as opposed to the architecture found in neighboring areas, this specific style leaned itself exactly as it was to the parks needs.

To learn more about the design of Harambe Village and to follow along this awesome series, click HERE!