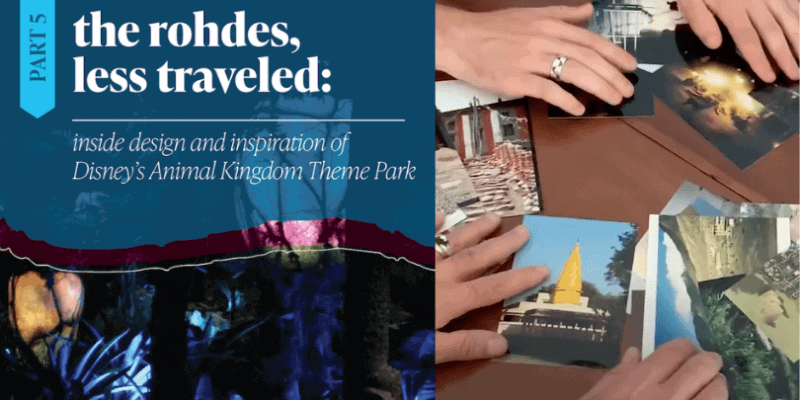 The most recent short video to be shared by the Imagineer is the fifth and final episode of the series and it focuses on the impact of lighting on a setting. More specifically, how different types/colors and levels of light can affect the mood and emotions sparked by different areas in the Animal Kingdom park.

Walt Disney Imagineering has worked tirelessly over the years, hiring the best and brightest minds to design and construct each and every Disney park and resort. The goal for some areas of the Walt Disney World Resort is to pull you out of the real world and fill the settings with over the top elements of fantasy. But for other parks, more notably Disney’s Animal Kingdom, part of the design element is to bring in aspects of the real world, based on the countries being showcased.

Joe Rohde starts off this episode of ‘The Rohdes, Less Traveled’ sitting by the firelight and talking about how as humans, we find that our emotions are specifically evoked when interacting with the senses as well as interacting with light. He goes on to discuss the longstanding rituals, ceremonies and traditions that stemmed from gathering around firelight and the memories and specific feelings that these stir up in us.

Then we get into the design element of lighting and how to make it interact within the space of a theme park — More specifically to make it believable in the context of Disney’s Animal Kingdom. As Rohde explains, you want it to be functional while also seamlessly fitting into the design and theming of a specific area in the park. He relates this task to set designing!

To learn even more about the process of choosing lighting in Walt Disney Imagineering projects, from Joe Rohde himself — click HERE for the full episode.

Do you like learning about the behind the scenes designing of Walt Disney World? Let us know in the comments!

Would you and your family like to visit Disney’s Animal Kingdom? Let us help with your vacation planning!