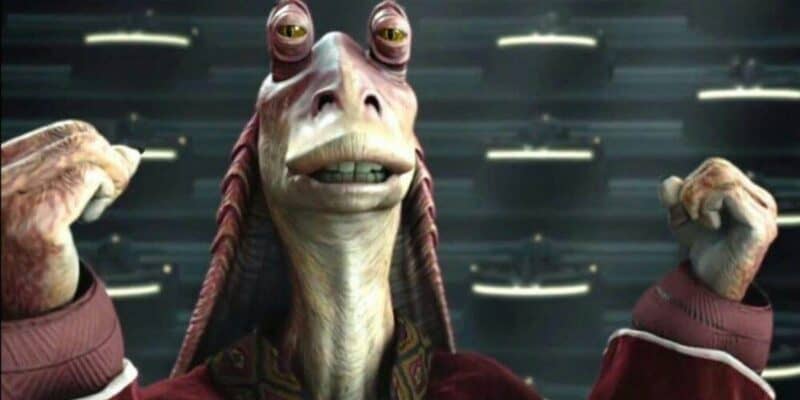 Star Wars fans have long suggested that the iconic character Jar Jar Binks from the prequel trilogy and Star Wars: The Clone Wars series is in fact a secret Sith Lord. Fans are still convinced that Jar Jar Binks pulled more strings in the fall of the Republic and Jedi Order than Palpatine did.

The mind of George Lucas gave Star Wars fans a new Star Wars saga with the prequel trilogy. Though the movie wasn’t praised like Star Wars: Episode IV – A New Hope (1977) of the original trilogy, the prequels supplied new characters, stories, and even secrets to the Star Wars universe.

George Lucas has reportedly stated that Jar Jar Binks was originally intended to be an undercover Sith Lord, but the Force user theory has been tossed back and forth between Lucasfilm and fans. While there are only ever two Siths, Jar Jar could have been the third hiding in Palpatine’s shadow.

In the video above, Star Wars fan channel The Rogue One breaks down crucial Jar Jar Binks scenes from Star Wars: Episode I – The Phantom Menace (1999), Star Wars: Episode II – Attack of the Clones (2002), and episodes throughout The Clone Wars animated series from Dave Filoni (The Mandalorian, The Bad Batch).

In one scene, Jar Jar is seen waving his hands slowly across the face of Sebulba on Tattooine after Jedi encounter a young Anakin Skywalker for the first time. Sebulba jumps on Binks, but before pounding on the Gungan, Jar Jar Binks possibly uses the Force to convince the crafty Podracer otherwise.

Jar Jar always uses his hands when convincing someone to do something in his favor, like Queen Amadala going to war with the Trade Federation on Naboo. He’s seen waving his hands in front of Qui-Gon Jinn (Liam Neeson) and Obi-Wan Kenobi (Ewan McGregor) in The Phantom Menance.

How does a Gungan go from exile, war hero, general, and then junior representative of Naboo in the Galactic Senate? On top of that, how does someone like Jar Jar Binks rise so low from the trenches that he can convince the Galactic Senate “to give immediate emergency powers to the Supreme Chancellor [Palpatine]”?

A crucial part of Palpatine’s plan to take over the Republic and turn it into the Empire involved being given absolute power during a state of intergalactic emergency. The government representative who managed to get the Senate to vote in favor of giving Palpatine that power was Jar Jar.

Many critics of this fan theory point out that Palpatine and his aid would have had no need for subtlety when speaking about the emergency powers act while Jar Jar was near. They would have simply ordered him to do it. Either way, he’s directly responsible for the fall of the Republic, and the birth of the Empire.

When audiences first meet Jar Jar and see him stumble throughout The Phantom Menace, Binks is a bumbling Gungan who perfectly dodges blaster shots on a battlefield and always stays alive when the odds are overwhelmingly against him.

Sound familiar? Yoda employs the same tactic when first encountering Luke Skywalker (Mark Hamill) on Dagobah to throw off Skywalker’s preconceptions about the last remaining Jedi in the galaxy. Jar Jar could be doing the same as a Sith Lord.

Granted, Yoda’s con game was done specifically to test Luke Skywalker’s patience, and see if he had what it took to become a Jedi Knight. Still, his personality and mannerisms are another example of how Binks might have tried to get the spotlight off of himself, and keep it that way.

People don’t realize they’re being fooled when they’re too busy laughing at the fool!

I will say this, it feels really good when the hidden meaning behind the work is seen. No matter how long it takes.

I will say this, it feels really good when the hidden meaning behind the work is seen. No matter how long it takes. #TPM

Though the Tweet seems vague, Best shared it when rumors suggesting Jar Jar Binks is a Sith Lord exploded (again) on the internet in 2015. Fans in the comments were quick to joke with the actor, stating that he has to be pulling their leg.

While they’re just theories, it’s insane to realize subtle details that could suggest Jar Jar Binks knew exactly what he was getting into in the Skywalker saga.

Do you think Jar Jar Binks is a Sith user? Let us know in the comments below!