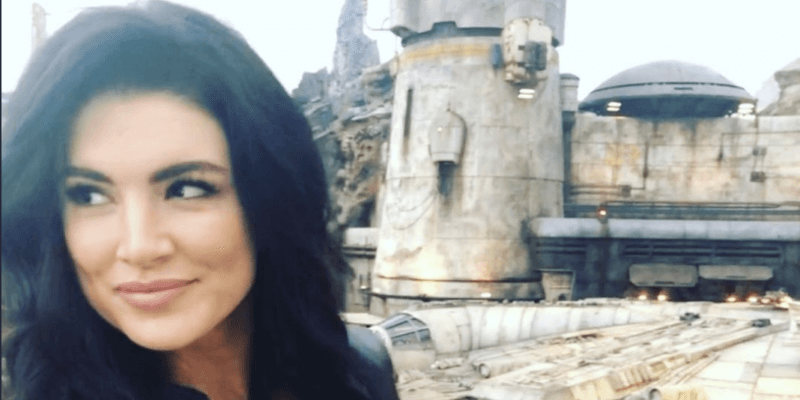 Carano — who was let go by Lucasfilm and The Walt Disney Company following a series of controversial Tweets throughout the airing of The Mandalorian Season 2 — is a divisive figure in the Star Wars fan community. In late 2020 and early 2021, hashtags like #FireGinaCarano, #WeLoveCaraDune, and #IStandWithGinaCarano alternately trended.

Recently, Carano confused Star Wars fans (and delighted her supporters) with a couple of cryptic social media posts, one of which included a graphic featuring a character that looked a lot like fan-favorite bounty hunter Cad Bane (Corey Burton).

Now, Carano’s “Cad Bane” post has finally been explained. It turns out the former Star Wars actress’s upcoming project with Ben Shapiro’s The Daily Wire — a film she has promised “will take down the Death Star” — is a Western.

The Duros bounty hunter is inspired by the Wild Wild West — down to his duel pistols — so the graphic the actress shared suddenly makes a lot of sense.

Per a new report about the movie:

…[filming is underway on] a fast-tracked production of Carano’s Western thriller “Terror on the Prairie.”

Directed by Michael Polish, the film follows a family of pioneers who defend themselves from a band of vicious outlaws on the prairies of Montana. The film also stars MMA fighter Donald “Cowboy” Cerrone, standup comedian Tyler Fischer and Nick Searcy (“The Shape of Water”).

As for the daughter of NFL quarterback Glenn Carano, her return to the Star Wars galaxy has not been confirmed, though a new rumor indicates she could be back for The Mandalorian Season 4 thanks to support from showrunner Favreau and leading man Pedro Pascal (Din Djarin).

For their part, Lucasfilm has confirmed they will not recast Cara Dune and have halted the development of her spinoff show, Rangers of the New Republic.

The characters who were with Dune on Moff Gideon’s (Giancarlo Esposito) Imperial cruiser — Djarin, Grogu (AKA “Baby Yoda”), Fennec Shand (Ming-Na Wen), Bo-Katan Kryze (Katee Sackhoff), and Koska Reeves (Sasha Banks) — are, however, all seemingly set to return to the Star Wars universe in The Mandalorian Season 3 or one of its spinoff shows, Ahsoka and The Book of Boba Fett.

There are even reports that Grogu will return in his very own series alongside his new Jedi Master Luke Skywalker (CGI Mark Hamill), but this remains unconfirmed.

What do you think about Carano officially moving on from Star Wars?