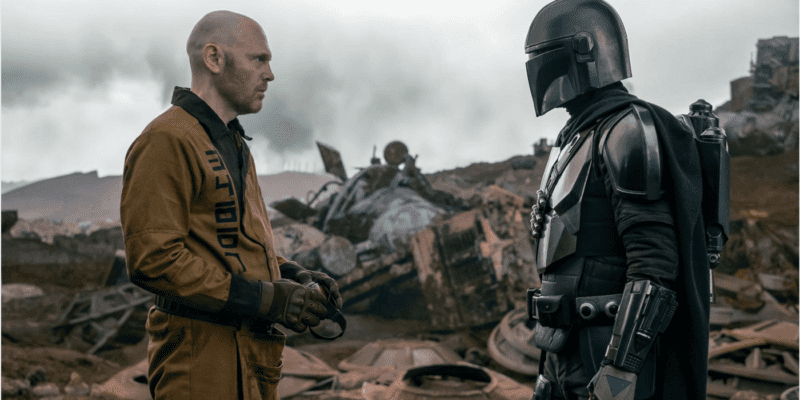 Comedian, writer, actor, and podcaster Bill Burr (F Is for Family, Date Night, The King of Staten Island, Stand Up Guys) is a man of many talents — but being a good Star Wars fan is not among them.

Related: ‘Mandalorian’ Star Wonders If Supporting Carano Will Get Him Fired

Burr, who has played prisoner Migs Mayfeld in both seasons of The Mandalorian so far, has previously admitted to not even watching the second season of the hit Star Wars series — he most recently appeared in Season 2, Episode 7 (“Chapter 15: The Believer) alongside Gina Carano (Marshal Cara Dune), Ming-Na Wen (Fennec Shand), Temuera Morrison (Boba Fett), and, of course, leading man Pedro Pascal (Din Djarin).

Now, Burr — who has famously made fun of the Star Wars franchise in comedy routines for years — has opened up about how he got cast in The Mandalorian saga in the first place.

Appearing on The Mom’s House podcast, he said:

“I went to Mike Binder’s birthday party and Jon was there. He said, ‘Hey, we’re writing this thing and we kind of have you in mind, you wanna do it?’ And I was like ‘well, I don’t know Jon. I’ve teased Star Wars people a lot.’ And he goes, ‘I know I listen to the podcast, I think it would be funny if you got in it.’”

Burr previously shared more details about his hilarious Mandalorian casting story on The Rich Eisen Show. During that interview, the actor expounded:

“I’ve never been a sci-fi [guy]. I like Blade Runner. There was a movie that Sam Rockwell did called Moon. I was never into the Star Wars thing. By the time I saw it I was too old, Ewoks and stuff. I wanted to see Fast Times At Ridgemont High, so I missed the boat. I ran into Jon [Jon Favreau] somewhere, hanging with Mike Binder. I should start giving that guy a commission. [Favreau said] ‘I’m doing this Star Wars thing. Do you want to do something?’ and I’m like ‘I don’t know, I’m kind of always making fun of it.’ And he goes ‘I think it would be funny, I think your fans would get a kick out of the fact you’re in it.’ And I went in there and they’re shooting it like a Spaghetti Western and I was like immediately so psyched to be apart of it.”

True to form for the highly secretive Favreau and Filoni, at this time, little is known about the upcoming third season of The Mandalorian, except that Pascal will return and it is likely set to follow more of the Darksaber story arc that began in Season 1.

Now that Djarin wields the black-bladed saber — he won it while trying to save Grogu in the Season 2 finale — both Moff Gideon (Giancarlo Esposito) and Bo-Katan Kryze (Katee Sackhoff) desperately want the ancient Mandalorian weapon for themselves.

Burr has not spoken out on whether or not he will reprise his role as Mayfeld, but there is certainly a precedent that he will return in The Mandalorian Season 3 or one of its spinoffs, Ahsoka and The Book of Boba Fett.

Do you want to see Bill Burr return to the Star Wars galaxy?