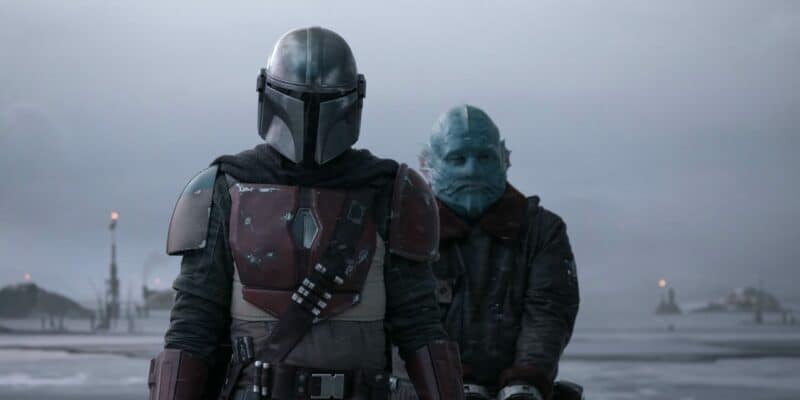 In addition to appearing in two episodes of showrunner Jon Favreau and executive producer Dave Filoni’s The Mandalorian — Season 1, Episode 1 (“Chapter 1: The Mandalorian”) and Season 2, Episode 4 (“Chapter 12: The Siege”) — Sanz was employed by The Walt Disney Company as the voice of El Fuego/Spectator I in Big Hero 6: The Series (2019-2021) and as Duncan in Wreck-It Ralph 2: Ralph Breaks the Internet (2018).

Per one report about the unfortunate situation:

Sanz groomed an underage fan between April 1999 and May 22, 2002 before sexually assaulting her at an SNL cast party. Sanz was a member of the Saturday Night Live cast from 1998 to 2006…According to the lawsuit, which names Sanz, SNL and NBC as defendants, the unnamed woman was 17 at the time of the assault and had been groomed by Sanz since they first met when she was 15 and he was 31.

The lawsuit itself also includes unsavory details about the nature of Sanz’s relationship with the young woman, who is referred to as simply “Jane Doe” throughout the legal documentation.

For example, the girl, who allegedly met Sanz in 2000 when she was running an SNL fan website, was taken to show tapings and after-parties where she was given alcoholic beverages, encouraged “engage in drug use”, and “inappropriately” touched by the comedian.

The lawsuit also names former SNL cast member and current late-night host Jimmy Fallon as one of the celebrities who was present at these events.

Over a year later after their first meeting, in August 2001, the lawsuit alleges that Sanz contacted the teenager via AOL Instant Messenger, and a cyber-sex relationship ensued.

The sexual misconduct seems to have continued for much of the Plaintiff’s adult life before she found the courage to file charges against the actor:

At this time, it is not known if Sanz is supposed to appear in The Mandalorian Season 3. Per both Pascal and Giancarlo Esposito (Moff Gideon), the third season of the hit Star Wars series has not yet begun filming at the famous The Volume soundstage.

However, production is expected to get underway soon. Little is known about Season 3, except that the Darksaber storyline is likely to continue playing a major role now that bounty hunter Djarin wields the ancient Mandalorian weapon — and Bo-Katan Kryze (Katee Sackhoff) still desperately wants it to avenge her sister Duchess Satine Kryze’s death.

If The Mythrol were to appear, it is likely that he would be a minor character who could be written out if needed, depending on Sanz’s legal status at the time of filming.

It is, however, important to remember that neither Disney nor Lucasfilm has commented on this developing situation.

Stay tuned to Inside the Magic for the latest updates.