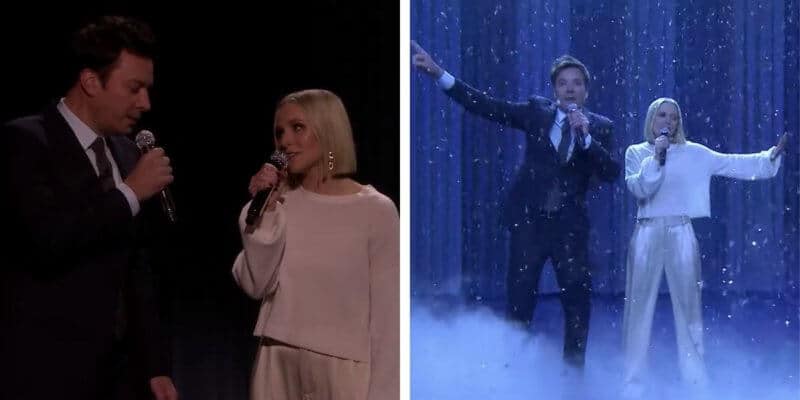 Are you ready to go into a whole new world with Kristen Bell and Jimmy Fallon? The Frozen 2 actress visited the late night tv show, The Tonight Show Starring Jimmy Fallon, Tuesday evening to talk details about the highly anticipated sequel, which hits theatres on November 22, but fans were in for a real treat when they realized that wasn’t the only reason Bell was there.

Bell and Fallon decided to take Disney fans through the History of Disney Songs by belting out popular hits and performing duets to popular Disney medleys.

Kristen Bell, who voices Princess Anna in Frozen and the upcoming sequel Frozen 2, has a Broadway background and is known for her singing and acting. Bell’s voice was a perfect fit for several of the Disney songs she and TV host Jimmy Fallon performed on the show.

Jimmy Fallon started off the History of Disney Songs performance with When You Wish Upon A Star, but it wasn’t long before Kristen Bell jumped in and they switched over to Supercalifragilisticexpialidocious. The skit took off from there as the duo covered Disney classics like Can You Feel the Love Tonight?, Bare Necessities, Remember Me, Part of Your World, and Under the Sea.

It didn’t take long before Fallon brought Bell’s famous Do You Want To Build A Snowman? into the performance, which quickly turned into a Frozen and Frozen 2 medley.

They even bring in special props like a magic carpet, a plush Simba, and snow!

While watching this clip from late night tv, full nostalgia came over me and I loved every minute of it. Bell and Fallon actually sounded fantastic as a duet and they touched upon all of the popular Disney hits.

You can watch the entire performance in the video below.

If you want to see the actress reprise her role of Princess Anna in the upcoming sequel, Frozen 2, make sure you get your tickets as the movie hits theaters on November 22.

What did you think of Kristen Bell and Jimmy Fallon’s performance? Let us know in the comments.