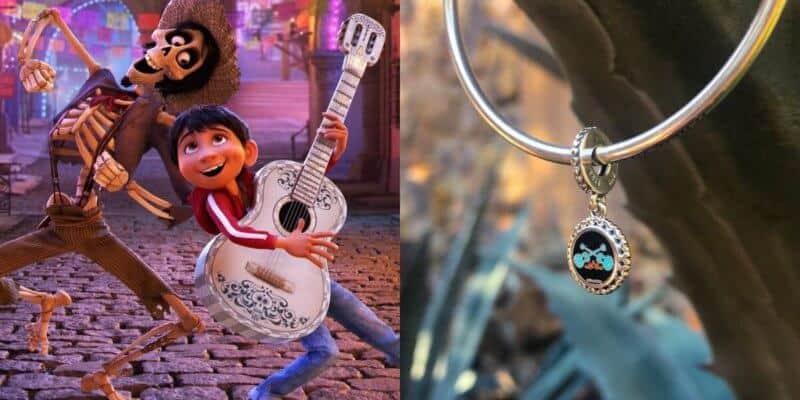 The movie, the music, the costumes, everything about Disney-Pixar’s “Coco” is phenomenal and mesmerizing. I mean, who doesn’t love “Coco”? If you are a fan of this popular Disney’s Pixar film, then you’ll have to head on over to Pandora Jewelry in the near future because they just announced today that they are releasing a “Coco” inspired charm.

This latest addition to the Disney Parks Collection by Pandora is a charm which features a sugar skull on one side and guitars on the other. Yes, it’s double sided!

The new “Coco”-inspired Pandora charm is available, beginning today, at a variety of locations across Walt Disney World Resort and the Disneyland Resort properties. Stop by Uptown Jewelers featuring Pandora Jewelry at Magic Kingdom Park, the newly re-opened Legends of Hollywood at Disney’s Hollywood Studios, or La Mascarade d’Orleans at Disneyland Park to add this new Disney Parks Collection by Pandora piece to your jewelry collection.

In case you aren’t familiar with the film, Disney-Pixar’s “Coco” follows the story of a young boy, Miguel, who, despite his family’s generations ban on music, dreams of becoming a successful and accomplish musician, just like his idol Ernest de la Cruz.

Miguel becomes desperate to show de la Cruz his talent and soon finds himself in the beautiful and colorful Land of the Dead. During his adventure, he runs into a charming trickster, Héctor, and the two embark on the journey together, which soon leads to the reveal of the true story behind Miguel’s family history.

The storyline is incredibly inspirational, and I just fell in love with Miguel and his passion for music instantly. He didn’t let anything stop him from chasing his dreams, which is a great lesson for everyone to follow.

Want to head to Disneyland or Walt Disney World so you can pick up this adorable “Coco” Pandora charm? Reach out to the Authorized Disney Vacation Planners at Academy Travel for a free, no-obligation quote so you can go on the Disney trip of your dreams!

Will you be adding the new “Coco” Pandora charm to your jewelry collection?