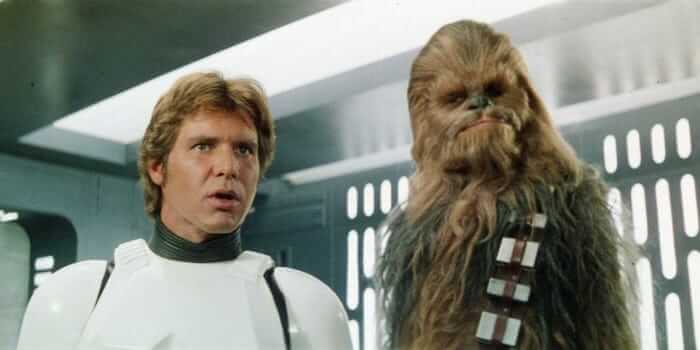 Han Solo and Chewbacca are one of the most popular duos in cinema history. Starring in multiple movies across the Star Wars franchise, the characters will next appear in a brand new series from Marvel Comics, simply called “Han Solo & Chewbacca”.

With cameo appearances in the remainder of the sequel trilogy, it would be Alden Ehrenreich who delivered Han Solo’s origin story for the galaxy far, far away. Solo: A Star Wars Story (2018) had an underwhelming performance at the box office despite the movie’s stellar cast — which included Emilia Clarke (Qi’ra), Paul Bettany (Dryden Vos), Donald Glover (Lando Calrissian), and Woody Harrelson (Tobias Beckett) — and its setup of future events involving the character Maul (Ray Park) and his crime syndicate, Crimson Dawn.

Despite rumors that a new Han Solo project featuring 79-year-old Harrison Ford is in the works for the Star Wars universe, nothing involving the famous duo has been confirmed. Until now.

StarWars.com has revealed that a new Star Wars series featuring the Millennium Falcon pilots will release next year:

Speaking to the writer, Marc Guggenheim, it is confirmed how this new Star Wars project will tackle the cinematic space smuggler and how he has always bordered the line between cynic and hopeless romantic:

You might think that that inner conflict didn’t present itself until the end of Episode IV, when Han returns to help Luke destroy the Death Star, but it’s already on full display at the end of Solo: A Star Wars Story, which, of course, predates Episode IV. So one of the things I’ve been playing with is the tension between the “hopeless romantic” Han reveals himself to be at the end of Solo and the hard-bitten cynic we meet in Episode IV. To be very reductive about it, I’ve searched for opportunities to force Han to choose between his lesser and greater angels.

Guggenheim continues to tease what’s to come from the series:

In the first issue, Jabba the Hutt gives them what should be an easy job: Steal something and bring it back to him. But the job turns out to be anything but easy as everything that can go wrong promptly does.

He also comments on how he plans to leave each issue with a cliffhanger and that the last page of issue one “will have people talking”. If there’s one thing that Star Wars is good at is getting people talking. We have seen time and time again, Lucasfilm’s leading franchise draw polarizing opinions such as with the release of Star Wars: Episode VIII — The Last Jedi (2017) from director Rian Johnson.

This will be the first-ever Han Solo and Chewbacca series and promises to expand on the “animosity” between Solo and Greedo, as well as introduce new characters such as a Marshal — a “corporate equivalent of a bounty hunter”. Star Wars has continued to explore the wider galaxy surrounding its movies and TV shows with comic series’ like “War of the Bounty Hunters” and “Darth Vader”.

In terms of live-action, next to debut in the Star Wars saga is The Book of Boba Fett from showrunner Robert Rodriguez and starring Temuera Morrison (Boba Fett) and Ming-Na Wen (Fennec Shand).

Will you be reading this new “Han Solo & Chewbacca” series? Let us know in the comments down below!