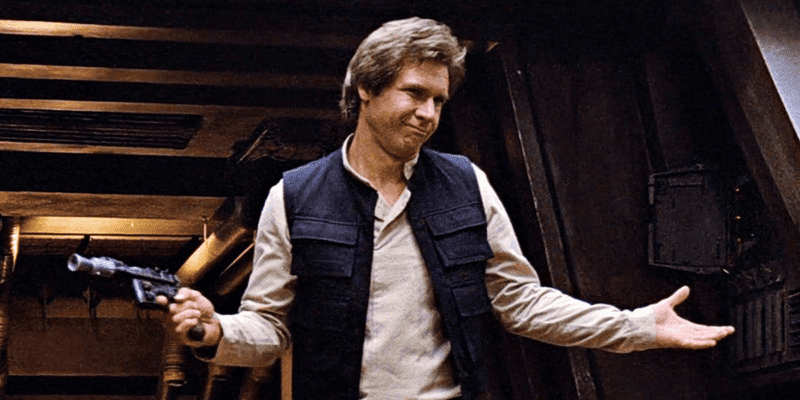 The Star Wars universe is an ever-expanding space opera that continues to refine the world of George Lucas’ work. In a brand new project, however, the integral death of smuggler Han Solo (Harrison Ford) has been changed in a big way.

The Star Wars universe exploded with LEGO Star Wars: The Skywalker Saga, introducing over 300 playable characters and hours of immersive gameplay. But, Star Wars fans have noticed a massive change to Han Solo and Kylo Ren that goes against what originally happened in Star Wars: Episode VII – The Force Awakens (2015).

Upon reuniting with his son Ben Solo/Kylo Ren (Adam Driver) on the Starkiller Base, Sith user Kylo Ren conquers the light side of his spirit by igniting his iconic lightsaber and killing his father.

The scene in The Force Awakens is brutal and shocking for many, as icon Han Solo’s Star Wars tenure finally came to a close with Star Wars: Episode IX – The Rise of Skywalker (2019).

Now, every Star Wars fan can relieve this heartbreaking moment in LEGO Star Wars: The Skywalker Saga… Sort of.

In the above video, Kylo Ren does not stab his father, but rather Han Solo deals with his death with Ren’s lightsaber.

Upon helping his son complete a task that he does not require the strength to do — clean his lightsaber — Han Solo carves a perfect circle around the catwalk that he’s standing on, only to fall through in a Looney Tunes fashion.

The beauty of LEGO Star Wars is that they can make any scene comical and help fans love the films even more!

That intense, gripping moment from the Sequel Trilogy has been altered hilariously, shedding light on what truly lies behind all of the backlash that directors J.J. Abrams and Rian Johnson faced upon the release of Star Wars: Episode VIII – The Last Jedi (2018) and more.

Play through the adventures of Anakin Skywalker, help Luke Skywalker battle Darth Vader and Emperor Palpatine, and duel for the fate of the galaxy with Rey and Kylo Ren in the new LEGO video game that immerses you in Star Wars like you’ve never seen it.

Though many players wish the game included critical levels (such as the Battle of Geonosis), online multiplayer, more extended campaign missions, character customizations, and more, The Skywalker Saga has proven one of the greatest LEGO games to date.

How do you feel about this Han Solo change? Let us know in the comments below!