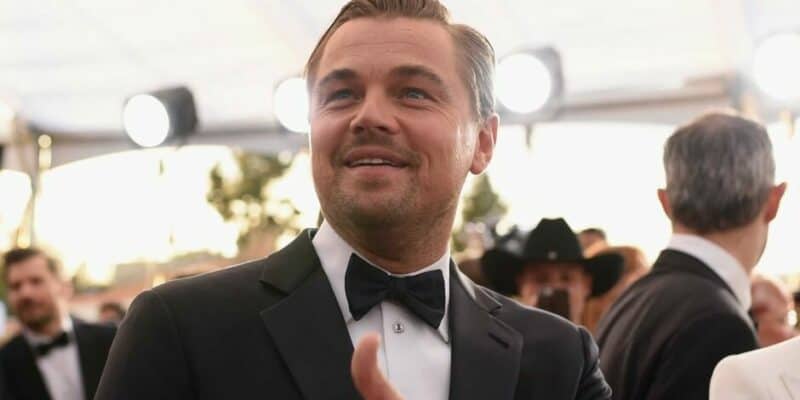 Leonardo DiCaprio (Titanic, The Great Gatsby, Catch Me If You Can, The Departed) has had a storied Hollywood career, even finally taking home his first — very elusive — Academy Award for The Revenant (2015).

The 47-year-old actor was one of George Lucas’s original choices to play Anakin Skywalker/Darth Vader in the Star Wars prequel trilogy — Episode I – The Phantom Menace, Episode II – Attack of the Clones, and Episode III – Revenge of the Sith — which released in 1999, 2002, and 2005, respectively.

The iconic Star Wars part ultimately went, of course, to Hayden Christensen, who is set to reprise alongside Ewan McGregor (Jedi Master Obi-Wan Kenobi) in the Obi-Wan Kenobi Disney+ series this year.

Turning down a starring role in the Star Wars universe, however, seemingly hasn’t deterred DiCaprio’s fandom. His Don’t Look Up costar, Jonah Hill (Superbad, 21 Jump Street), recently spoke out about how the What’s Eating Gilbert Grape? actor convinced him to watch Jon Favreau and Dave Filoni’s The Mandalorian.

“Can I go off on a tangent for a second? I don’t watch sci-fi and stuff like that, so I had never seen Game of Thrones. Never seen an episode. I started in the past couple of months. I’m on season 4. I used to have a rule: If it didn’t happen or it couldn’t happen, then I just wasn’t interested, because I would lose focus. Leo made me watch The Mandalorian when we were making Don’t Look Up, and it was like, Baby Yoda was so cute, but I just didn’t give a f*** because I didn’t know anything that it was about.”

Although Hill clearly isn’t convinced that The Mandalorian is worth the hype, millions of Star Wars fans would disagree. From almost the moment it debuted, the series — which introduced Grogu (AKA “Baby Yoda”) and bounty hunter Din Djarin (Pedro Pascal) into the Star Wars galaxy — has been significantly more popular than the average TV show in the United States.

More on The Mandalorian

Furthermore, it has already been granted two official spinoffs — The Book of Boba Fett and Ahsoka — with a rumored third Bo-Katan Kryze (Katee Sackhoff) show in the works. There have also been reports that a fourth season has already been greenlit by Lucasfilm and The Walt Disney Company.

More on Don’t Look Up

The official description of Don’t Look Up reads:

Two astronomers go on a media tour to warn humankind of a planet-killing comet hurtling toward Earth. The response from a distracted world: Meh.

What do you think? Should DiCaprio still join the Star Wars franchise at some point?

Comments Off on Despite Turning Down ‘Star Wars,’ DiCaprio Still Obsessed With “Baby Yoda”