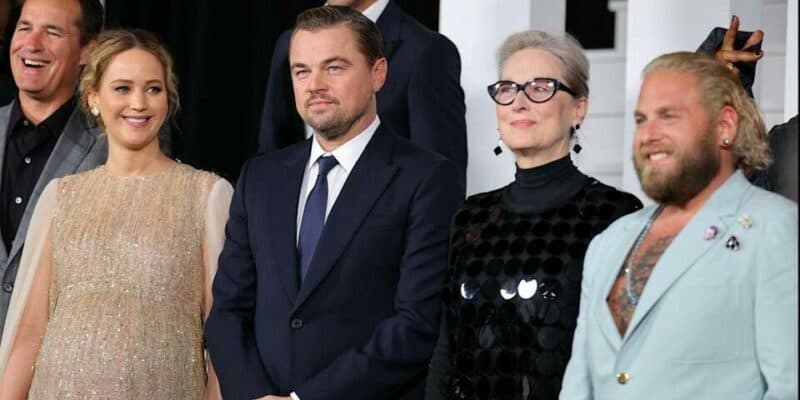 The Louisville native stars alongside Academy Award winner Leonardo DiCaprio (Titanic, The Revenent, The Great Gatsby, Catch Me If You Can) and Timothée Chalamet (Dune, Little Women, Wonka). Recently, Lawrence blasted her costars, calling the day she spent filming in a car with them the “most annoying day of my life.”

“They drove me crazy that day.”

“I don’t know what it was. Timothée was just excited to be out of the house [after the pandemic lockdown]. I think it was, like, his first scene. And Leo had picked the song that was playing in the car and was just, like, ‘You know, this song was about, you know, blah, blah, blah.'”

Lawrence continued blasting the Inception star and the Call Me By Your Name actor, saying, “I just remember being in absolute misery that day. It was hell.”

During her Late Show interview, Lawrence also shared a hilarious anecdote about Meryl Streep (Mary Poppins Returns), who also is also part of the all-star cast of Don’t Look Up. The story stems from Lawrence referring to the legendary actress as “the GOAT (Greatest of All Time)” during a photocall:

But Streep, who plays a president unbothered by a looming comet strike on Earth in the film, apparently thought they were literally calling her a goat.

When Lawrence used the term during a photoshoot, Streep responded: “Yeah, that’s right. Just tell the old goat where to go.”

A surprised Lawrence then clarified what the term meant.

“I was like, ‘Meryl, you know that GOAT means greatest of all time, right?’” she recalled.

Now that she is done working with DiCaprio — who turned down roles in both the Star Wars franchise and Disney’s Hocus Pocus early in his Hollywood career — and Chalamet, Lawrence, currently pregnant with her first child with Cooke Maroney, has two projects in the works. She will star in Red, White, and Water and Bad Blood, neither of which have release dates at this time.

More on Don’t Look Up

The official description of Don’t Look Up reads:

Two astronomers go on a media tour to warn humankind of a planet-killing comet hurtling toward Earth. The response from a distracted world: Meh.

What do you think about J-Law’s comments?