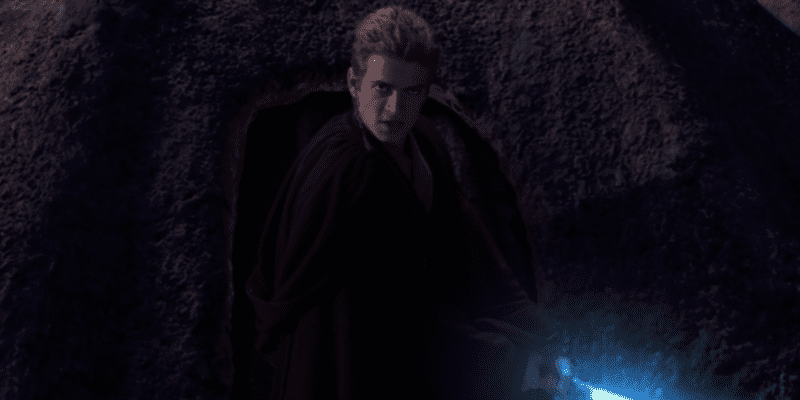 A new book in the ever-growing Star Wars canon has made one tragic part of Star Wars: Episode II — Attack of the Clones (2002) even worse. Though George Lucas’s third prequel trilogy installment truly captures the downfall of Jedi Anakin Skywalker to Dark Lord of the Sith, Darth Vader, it is Episode II that delivers Anakin’s first spine-chilling moment.

It was in Attack of the Clones that the Star Wars story twisted into something more sinister. Upon returning to Tatooine with Padmé Amidala (Natalie Portman), Anakin Skywalker (Hayden Christensen) learns that his mother Shmi Skywalker (Pernilla August) has been abducted by Tusken Raiders. Seeking out information from Cliegg Lars (Jack Thompson), Anakin then leaves Padmé with Cliegg, his son, Owen Lars (Joel Edgerton), and Owen’s girlfriend, Beru (Bonnie Piesse) to seek out the perpetrators.

After finding his mother, who subsequently dies in his arms, Anakin goes on a murder spree, slaughtering the Tusken Raider families with his lightsaber in his quest for revenge. It is during this moment that the Star Wars movie visits Yoda (Frank Oz) and Jedi Master Mace Windu (Samuel L. Jackson) on Coruscant. While Yoda’s reaction is a clear signal of his own worry regarding Anakin’s downfall, it is the voice of Liam Neeson’s Qui-Gon Jinn that is most interesting in this part of the Star Wars trilogy.

An excerpt from a new book — EK Johnston’s Queen’s Hope (2021) — details that Anakin did in fact hear his former master’s words, making the moment he killed the Sand People so much worse than first thought. Johnston’s book is the third in her trilogy focusing on Padmé Amidala and finds the Star Wars characters during the events of their secret marriage ceremony at the end of Attack of the Clones. Per StarWars.com, the excerpt reads:

He shrugged off his worldly concerns and reached out with the Force. He’d heard Qui-Gon’s voice in the desert, begging him to listen to his better nature, not to give in to his hatred. He hadn’t listened. At the time, he’d told himself he was imagining it, but he knew he was lying. If Qui-Gon was out there, somehow, Anakin owed him an apology. And he would always appreciate the Master’s advice.

But he found nothing. Anakin looked deeper. There was so much fighting in his future, but it was all for the good of the Republic, for order. Maybe that was what Qui-Gon wanted him to see. There was always a way for him to make it right.

The fact that Anakin could hear Qui-Gon Jinn’s cry makes his spree an even worse moment for the character. In addition, his determination to apologize to the deceased Jedi Master in Johnston’s book makes his attacks on the Jedi during Order 66 and his duel with Obi-Wan Kenobi (Ewan McGregor) at the end of Star Wars: Episode III — Revenge of the Sith (2005) even more reprehensible. However, Johnston’s reference of the “fighting in his future” lines up with Anakin’s leadership role during Star Wars: The Clone Wars (2008–) and his mentorship of the young Jedi Padawan, Ahsoka Tano (Ashley Eckstein).

It’s an exciting time for the stories of Anakin Skywalker in the Star Wars saga. Christensen was confirmed to be back in Star Wars in Deborah Chow’s Obi-Wan Kenobi which is rumored to debut this coming May. And October brought the news that the actor will reprise his role in Rosario Dawson’s Ahsoka Tano series, Ahsoka when the show debuts on Disney+ in the near future.

Lucas’ original trilogy might have delivered the shocking “I am your father” moment and Vader’s eventual redemption but it was the prequel trilogy that gave the Star Wars universe the origin story for this popular villain. Beginning with Star Wars: Episode I — The Phantom Menace (1999), the prequels were rooted in the story of Vader’s early years. From a young boy on Tatooine to the disgraced Jedi who slaughtered younglings during Palpatine’s unveiling of his true identity, Darth Sidious and the rise of the Galactic Empire, the Star Wars galaxy was never the same after Skywalker became Vader.

What do you think about Star Wars confirming Anakin heard Qui-Gon Jinn? Let us know in the comments!