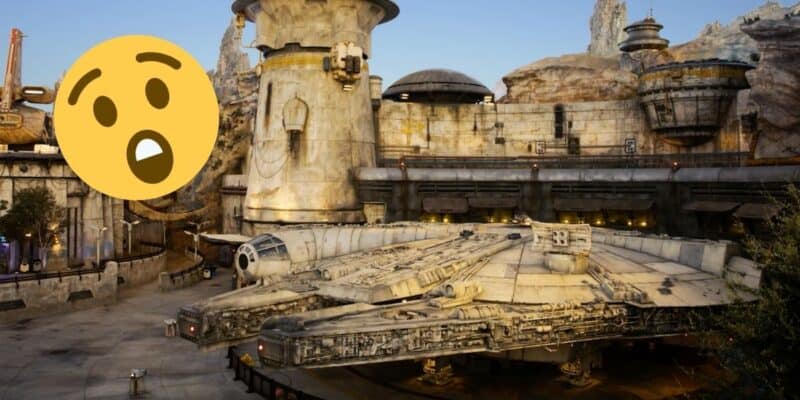 Back in 2019, Walt Disney World welcomed Star Wars: Galaxy’s Edge to its immersive land portfolio. The area located in Disney’s Hollywood Studios brought the Star Wars universe to the Orlando theme park, situating Guests in the action of the sequel trilogy.

While the Tower of Terror is this Park’s icon, the Millennium Falcon’s striking presence at Galaxy’s Edge draws Guests from all over the world. But did you know, there are actually two of this fan-favorite ship at Walt Disney World?

Star Wars: Galaxy’s Edge opened at Walt Disney World in 2019 and has since gone on to become one of the Disney Resort’s most popular hotspots. With the Millennium Falcon: Smuggler’s Run attraction, the hugely popular Star Wars: Rise of the Resistance, custom lightsaber station Savi’s Workshop, Droid Depot, Oga’s Cantina, and Docking Bay 7 Food and Cargo, Batuu really does have it all. On top of those attractions, characters like Rey, Chewbacca, and BB-8 can be seen throughout Galaxy’s Edge.

The Star Wars-themed land recently became even busier after the Disney Resort abolished its virtual queue and boarding pass system in favor of a traditional standby queue used at other popular attractions like Big Thunder Mountain and Space Mountain in Magic Kingdom, Test Track and Frozen Ever After in EPCOT, and Avatar Flight of Passage in Disney’s Animal Kingdom.

This move came just before Walt Disney World launched the Disney Genie system. Disney Genie+ and the a la carte Individual Lightning Lane Selections came into action on October 19, 2021, and allowed Guests to pay an additional charge on top of their theme park ticket to ride attractions like Star Wars: Rise of the Resistance and Remy’s Ratatouille Adventure.

Despite all the fun that Disney Guests can have riding attractions or watching nighttime spectaculars like Disney Enchantment, another fun family-friendly activity is hunting out Hidden Mickey’s or unlocking Disney secrets within the Parks.

most people have never seen this

The video shows a mini Millennium Falcon gripping the underside of the huge ship, clinging on as the real thing did to a Star Destroyer in Star Wars: Episode V — The Empire Strikes Back (1980). It’s only a small detail but it’s another example of Disney Imagineering at its best and goes to show that while it seems that there’s only one Millennium Falcon at Star Wars: Galaxy’s Edge, there’s actually two.

Disney Parks’ attention to detail is one of the things that makes the whole Disney theme park portfolio stand out. From the HUGE Hidden Mickey and Hidden Oswald found at Expedition Everest — Legend of the Forbidden Mountain in Animal Kingdom to the Mickey Mouse lightning rod in Hollywood Studios, Disney’s Wilderness Lodge’s Hidden Mickey Scavenger Hunt to the puzzling rocks that only reveal something from a certain angle at Pirates of the Caribbean, Walt Disney World is a feat of genius Imagineering.

Oh, and it’s not just the Imagineers! Be the first visitor to the Ye Olde Christmas Shoppe in Magic Kingdom and add your own decoration to the tree — the Cast Members will also gift you a Christmas decoration to mark the moment!

Did you know about the hidden Millennium Falcon? What’s your favorite Walt Disney World easter egg? Let us know down below!