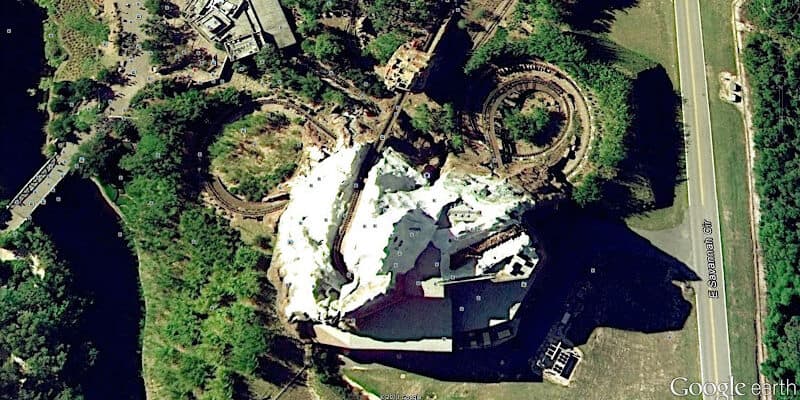 That’s right. We said it. There’s a gargantuan Hidden Mickey only helicopter operators or Google Maps enthusiasts have seen before. But also, if you expand your viewpoint and are a Disney animation history buff… you’ll see an Oswald the Lucky Rabbit atop the Expedition Everest roller coaster.

Expedition Everest Is a Hidden Mickey AND A Hidden Oswald

Being huge Disney Parks fans, Hidden Mickeys are nothing new to us. We love finding them around the Park, both in three circle form, but also in statue form, musical form, and forced perspective form. They are a great source of fun and entertainment at Walt Disney World Resort. We believe the Mickey Head solar farm may be the largest Hidden Mickey on Walt Disney World Resort property reaching 20 acres in size, but Expedition Everest has to come close!

Checking out Expedition Everest from any other angle will be a familiar point of view. You’ll see the long bridge-like lift hill climbing into Disney World’s Forbidden Mountain, capped with snow and a terrifying Yeti (Disco Yeti). Base Camp train tracks reach out the back of the Mount Everest area, racing through the Himalaya greenery and Nepal territory. The attraction track from this angle doesn’t look like much more than a typical rollercoaster.

But if you are looking from above from a backstage theme park viewpoint, you’ll clearly see a giant mickey head with ears made of rollercoaster tracks! It’s enchanting to find such detail laid in by Walt Disney Imagineering legend, Joe Rhode.

But wait, there’s more in this Mt. Everest! Pull out even more to include that green-laden rollercoaster track, and you’ll see two more ears reaching out from Mickey’s head. These fully formed and specifically angled ears recreate those of Walt Disney’s first animated creation, Oswald the Lucky Rabbit. Drawing out Oswald’s straight ear and then comically bent/angled ear, Expedition Everest shows us these two animated figures are at the base of Disney magic!

Still can’t quite see them? Here’s a terribly drawn visual aid to help you see both Mickey’s head and Oswald’s noggin reaching from the snowy mountain.

Wait, Who Is Oswald, Exactly?

This is Oswald, if you’re not familiar with Walt Disney’s first creation. The “Lucky Rabbit” was first drawn in 1927 by Walt Disney, and starred in twenty-seven animated short films released to theaters from 1927 to 1938 by the Walt Disney Studio. The Universal contract that agreed to Disney creating Oswald shorts for them got a bit dicey when Producer Mintz signed a new three-year agreement with Universal to provide Oswald shorts without Disney’s involvement in 1928.

Walt left for New York to negotiate with Mintz, but Mintz had backdoor deals going on. Disney would try and make arrangements with Universal directly and cut out Mintz altogether, but after Mintz offered to buy Disney’s studio over giving him back control of Oswald, Walt walked out, attempting to fight for the rabbit. Sadly, that never happened, and on the train ride home, Walt created Mickey Mouse.

Oswald would come back to The Walt Disney Company in 2006 after anchorman Al Michaels was traded from ESPN to NBC for Oswald the Lucky Rabbit, but Expedition Everest had already been built for Disney’s Animal Kingdom Park in 1998, perhaps forecasting the return of the long-eared rodent.

Did you know about the Hidden Mickey and Hidden Oswald in Disney’s Animal Kingdom Expedition Everest? Leave us a comment below!