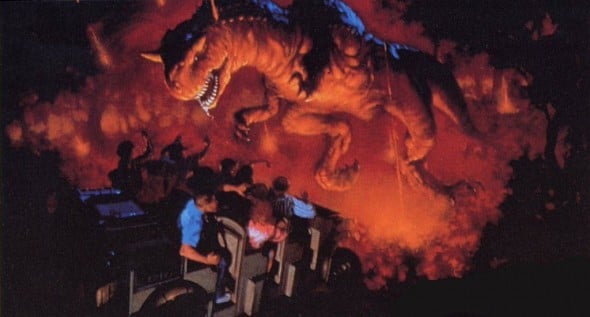 “Definitely not our dino!” Nope, that Carnotaurus is not ours. And you’ve got to wonder if that line was added for this reason! Disney’s DINOSAUR is a terrifying ride that descended from Disney World’s Countdown to Extinction (an even more scary ride) and subjects Disney Guests to a thrilling chase in the land before time.

But what if we told you that the Carnotaurus dinosaur you know and love (maybe?) has no basis in reality and completely bucks paleontological science? It’s a fact, and Joe Rohde knows it!

Many years ago, as Disney’s Animal Kingdom Park was taking shape, so were the dinosaur bones in Dinoland, U.S.A. As Countdown to Extinction developed its storyline and the “villain” was identified, the Carnotaurus began to take an… usual shape. Joe Rohde acknowledged, in a recent Instagram post, the phenomenon that has been the Disney Carnotaurus.

The actual Carnotaurus was much more slender and smaller than the T-Rex. It was a small figure. But in wanting to feature the lesser-known (or more unusual) species of dinosaur in this attraction, the “antagonist became Carnotaurus.”

But as you may know, Disney Park animatronics need a metal skeleton. And the larger the animatronic, the beefier the skeleton needs to be in order to support the size, weight, and movements of the animal. (This is a big reason the Yeti is now just a Disco Yeti).

As the Carnotaurus grew in size (for fear factor), so did its skin, as it needed to be thick and well covering. Then the texture needed to read from afar and in the dark. The puny arms of the real-life dino grew to be more menacing and threatening… the horns grew more pointy… until Disney’s Carnotaurus was a completely new animal.

The strange thing is that the film, Dinosaur (2000), began to emulate Joe Rohde‘s Carnotaurus until the film no longer showed a lifelike creature, either. These two examples then affected dinosaur lovers’ imaginations and expectations of this creature, and by the time the Universal Jurassic World franchise fell in love with the Carnotaurus, it, too, was a massive creature that held footing in Rohde’s carnivorous dinosaur creation.

The Cretaceous abelisaur Carnotaurus is a weird slender critter with really really tiny arms. Really tiny. When we were building Dinoland at Disney’s Animal Kingdom and filling out what would become the Dinosaur ride, we wanted to feature some of the more unusual dinosaurs, rather than the classics. Our main antagonist became Carnotaurus.

By the time we were done we had a huge and somewhat new animal. Not utterly implausible but not Carnotaurus Sastrei. We basically invented a Carnotaurus Robustus. I did a lot of the early body sketches to fit around the steel, along with Paul Torrigino. Gene Whiskerson sculpted the model. Since the movie was in production at the same time, they picked up our massive knobby Carnotaurus so that it would connect film and ride. But then, millions of kids saw this massive Carnotaurus at a formative stage in their Dino awareness.

Since that time, and up to this day, I still see depictions of Carnotaurus as a massive thorny bulldog of a creature instead of the sleek, funky overbite, weaselish critter it was. I wonder how many of these depictions could be traced back to our design solutions for those gigantic steel ankles on the AA figure we built. By the way, all these images were downloaded from other sites. My favorite is Gabriel Uguetos. I think his paleo-reconstructions are phenomenally believable.

Below, you will see his full post on Instagram as well as several other images Rohde collected to show the ridiculous size Carnotaurus grew to during his theme park creation and build.

Others have noticed the size discrepancy in the too-big for reality dinosaur and took to comparing it not only to reality but the developed Carnotaurus in the Disney Dinosaur film that was released in tandem with the ride rebranding. This artist going by the name Kovács Attila, discusses, with graphics, the design and size of the Disney Carnotaurus in comparison with the Tyrannosaurus Rex’s actual size.

We know the Carnotaurus in Disney's Dinosaur was massive, but one of the two that we see in the rest of the film was especially BIG. Tried to scale it next to a T. rex (image by Franoys) based on Krentz's concept, the Dinosaurs ride sculpture, and the herbivores of the film. pic.twitter.com/8VlL2UrhCb

Is DINOSAUR Too Scary?

Most likely, yes. Even after being toned down from its predecessor, DINOSAUR keeps its thrill warning on Disney’s website. “DINOSAUR includes loud sounds in the dark and menacing dinosaurs that may scare some children,” says the official page. If you’re looking for a bit of a digest on the ride, Disney also adds,

A Race Against Time: A paleontologist recruits you for a secret mission to bring a 3.5-ton Iguanadon back to the present. There’s just one problem-the giant meteor that wiped out life on Earth is on the way!

As the clock counts down, fiery meteors crash down around you. Will you make your escape before the dinosaurs-and you-become extinct?

If you’re worried about scaring your children right out of their minds (it’s possible, even for the most voracious dinosaur lover) we recommend screening some “ride throughs” on YouTube or other video websites. The loud sounds, chomping, and roars are combined with a turbulent ride to be incredibly terrifying as your jeep rumbles through the dark.

Do you love the Disney Carnotaurus, or did you already know that this spine-chilling animal has no basis in reality? Leave us a comment below!