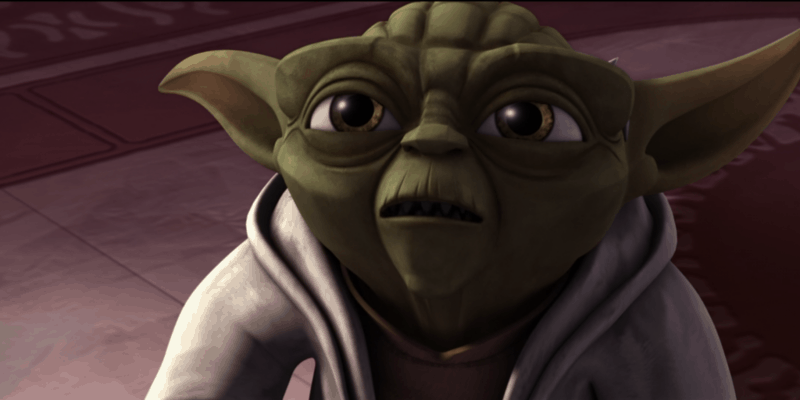 With The Book of Boba Fett just weeks away, and with The Clone Wars, Rebels, The Bad Batch, Resistance, and The Mandalorian on Disney+, it’s fair to say that Star Wars has a huge number of TV shows under its belt. And in 2022, Obi-Wan Kenobi, Ahsoka, and Andor will also be arriving.

But while many of these shows are scattered along the Star Wars timeline, what helps bridge them together is the fact that a number of Star Wars characters appear in more than one, especially if they’re crossing the world of animation into live-action or vice versa!

There are many characters who have undergone the conversion from animation to live-action, with Ahsoka Tano and Bo-Katan (Katee Sackhoff) being among the more recent examples. And now, Sabine Wren from Rebels will also be making her live-action debut in Ahsoka.

But what about those who are yet to get the animated treatment? While The Clone Wars and Rebels gave many major characters such a makeover, the only ones we’ve seen in more recent times are Fennec Shand (Ming-Na Wen) and Bib Fortuna, who both appeared in The Bad Batch.

However, with The Bad Batch Season 2 on the horizon, it’s likely things will change. While that show takes place shortly after the Clone Wars (around 19 BBY), here are nine Star Wars characters who could appear in animated form sooner than you think!

Jyn Erso (Felicity Jones) is one of the strongest female Star Wars characters out there. While she has only appeared in 2016’s Rogue One: A Star Wars Story, she could show up in The Bad Batch, especially seeing as it’s set before the A New Hope prequel, in which Jyn dies saving the galaxy.

Technically speaking, though, Jyn Erso has already appeared in animation, in micro-series Star Wars: Forces of Destiny – but we’re talking about one of the more ‘canon’ shows. So, could she show up in The Bad Batch? Well, it all really depends on the character’s age.

Jyn is 21 years old in Rogue One, so she was born in 22 BBY. If she were to appear in The Bad Batch – set in 19 BBY – she’d be three years old. However, if the show ever makes a time jump, Jyn could be worked into a story as a child, especially given her lifelong ties with the Empire.

If you aren’t familiar with Star Wars: Rebels, which is set just five years before A New Hope, you might be surprised to learn that Han Solo (Harrison Ford/Aldren Ehrenreich) doesn’t show up in the show, despite Obi-Wan Kenobi, Princess Leia and Lando Calrissian all getting cameos.

Rebels is the closest to the original trilogy we’ve ever been with a canonical Star Wars animated show, but seeing as it finished airing three years ago, there’s really only one place for Han Solo to go – The Bad Batch.

Han is 32 years old in A New Hope, and 19 – 22 in Solo: A Star Wars Story. This would put him at around 13 years old at the time of The Bad Batch. And there are many ways to introduce him too, given his eventful childhood, from being raised by pirates to becoming a young smuggler.

We know what you’re thinking – Rey (Daisy Ridley) wasn’t alive during the time of The Bad Batch. In fact, she wouldn’t be born for another 34 years! And if Rebels was still running – which is set a lot further down the line – there wouldn’t even be a way to have her appear in that show!

Rey doesn’t show up in Star Wars: Resistance, either, which is set sometime before and during the Star Wars sequel trilogy. So where could the ‘last Jedi’ currently fit in canonical Star Wars animated shows, seeing as The Bad Batch is completely out of the question?

Well, it’s possible that we’ll see another round of Star Wars: Visions episodes, so maybe Rey will undergo the anime treatment. Or maybe all these rumors of the upcoming Ahsoka series introducing time travel could mean that she will be free to show up in The Bad Batch!

It isn’t a conversation about Star Wars without some controversy, but we decided to include Cara Dune (Gina Carano) because she’s still a Star Wars character, regardless of anything that takes place on our side of the screen. Nevertheless, there are currently no plans for Dune to be recast.

Cara Dune was a huge hit with fans during her time on The Mandalorian, with Carano bringing a tough-but-tender approach to the role. While it’s still possible that Disney and Lucasfilm will source a replacement, it’s probably more likely we’ll see Dune show up in an animated show.

The character’s age hasn’t been confirmed, but she’s allegedly in her late thirties just like Carano. As such, this would make her around 10 years old (or thereabouts) if she were to appear in The Bad Batch. With that said, we think Cara Dune deserves her own animated show!

We’ve finally arrived at a character who could be easily placed in pretty much any Star Wars animated show! However, seeing as The Bad Batch is the only one that’s currently running, that’s exactly where we hope to see Baby Yoda make his debut appearance in animation.

Like Yoda, we don’t know the name of Grogu’s species, but what we do know is that they age about ten times slower than humans do. Yoda dies at around 800 years old (he seems about 80), while Grogu is 50 years old in The Mandalorian (although he does seem a bit younger than five).

So if Grogu ever gets a cameo in the post-Clone Wars animated show, he probably wouldn’t seem that much different from how he appears in The Mandalorian. After all, we learn from Ahsoka (Rosario Dawson) that he was training in the Jedi Temple on Coruscant when Order 66 hit.

We can’t talk about Grogu without bringing Din Djarin (Pedro Pascal) into the mix, and we can’t wait to see Mando show up in animation. It’s probably going to happen at some point, but like with many other characters on this list, The Bad Batch would see him appear as a child.

Fans estimate Din Djarin to be around the same age as Cara Dune – in his late thirties. And we know that he was rescued from Mandalore in 19 BBY, in which he looks around 10 years old, so this makes sense. So he’s old enough to appear in The Bad Batch already.

But let’s hold our blurgs, as we also know he was taken in by the Children of the Watch, before eventually joining ‘The Tribe’ on Nevarro. Not only that, but Din Djarin would hardly be bounty-hunting at the age of 10. Although this didn’t stop Boba Fett from showing up in The Clone Wars!

Of course, we’re going to include Luke Skywalker (Mark Hamill) on our list! After all, the character has been given a second chance following the disastrous sequel trilogy and his widely-hated portrayal in The Last Jedi.

But despite being such an iconic character and a huge part of pop culture, Luke Skywalker has never appeared in any animated show! And there have been plenty of opportunities, with Rebels being the biggest (although he does get a mention from Darth Maul).

So could Luke show up in The Bad Batch? The short answer is no, as he’s a newborn baby at the time of that show. But this doesn’t rule out the fact that Luke may show up in animated form one day. And then there’s the whole time travel-thing, which would open up so many doors (literally).

Can you think of any other Star Wars characters who are yet to appear in an animated show?