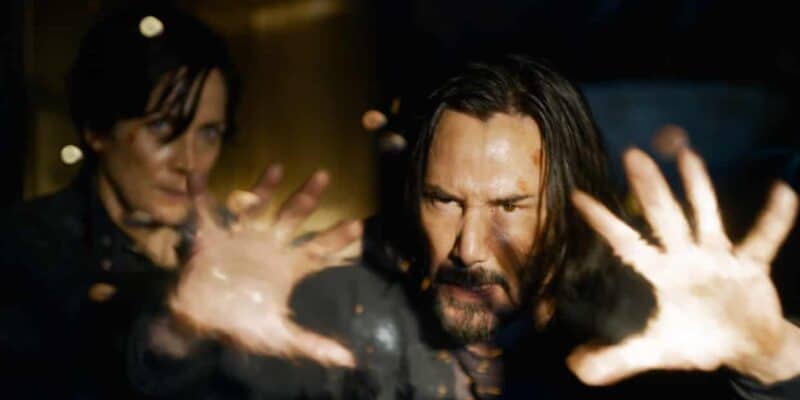 Now, with the HBO Max and theatrical release of The Matrix Resurrections [trailer below] just days away, on December 23, 2021, Reeves has spoken out about fans’ disappointment regarding the original Matrix trilogy.

Per a recent interview:

In 1999, when I [the interviewer] was 17, the first Matrix seemed to me the least boring film ever made. Over and over I guessed what might come next in the story. In 2001, when I was 19, the sequels gave me my first taste of artistic disappointment: how impossible it is for a much-imagined thing to live up to one’s own limitless expectations.

When I tell Reeves this he is sympathetic. The third Star Wars movie was his own big let-down, he says. He was 19 when Return of the Jedi came out. “I went in, like, ‘Wow, I wonder, are they gonna do this, and will they do that…? And then I was, like, ‘Oh no. Oh no.’” Reeves clears his throat. “Um, so I totally get it. I know that experience as a filmgoer. But I just try to let films be, y’know? I try to think about what the creators were going for. It’s their work of art, man. I try to come to their art and meet it wherever it is.”

Intriguingly, despite the fact that fans in the 1980s were seemingly disappointed by aspects of the final installment in George Lucas’s Star Wars original trilogy, Episode VI – Return of the Jedi (1983), was recently honored when it was added to the Library of Congress’s National Film Registry to be preserved for posterity

Per the LoC’s official announcement:

The original Star Wars trilogy reached its first apex with this film, the third release in the “a galaxy far, far away” trifecta. Directed by Richard Marquand, from a story by, of course, George Lucas, Jedi launches Lucas’ original, legendary characters — [Jedi Knight Luke Skywalker] Luke [Mark Hamill], [Princess Leia] Leia [Carrie Fisher], Han Solo [Harrison Ford], C-3PO [Anthony Daniels], R2-D2 [Kenny Baker] and others — on a series of new adventures, which takes fans from the planet of Tatooine to the deep forests of Endor. Populated by intriguing new characters — including Ewoks and the gluttonous Jabba the Hutt — and filled with the series’ trademark humor, heart, thrills and chills, Jedi, though perhaps not quite up to the lofty standards of its two predecessors, still ranks as an unquestioned masterpiece of fantasy, adventure and wonder.

Reeves was also considered for other roles under the Disney banner, including Yon-Rogg (Jude Law) in Marvel Studios’ Captain Marvel (2019) and Wolverine (Hugh Jackman) in X-Men (2000). He was unable to do either of these films due to scheduling conflicts.

There are, however, many rumors that the John Wick leading man will finally be joining both Marvel —  not in Kevin Feige’s Marvel Cinematic Universe, but in Sony Pictures’ Spider-Man spinoff movie, Kraven — and Lucasfilm’s Star Wars franchise in the near future.

While many fans want Reeves to play “Knights of the Old Republic” Sith Lord Darth Revan [above]. rumors abound that Reeves may actually portray a brand new original dark side character in an upcoming Star Wars movie or series, such as Leslye Headland’s The Acolyte.

Are you looking forward to Warner Bros. Matrix Resurrections?