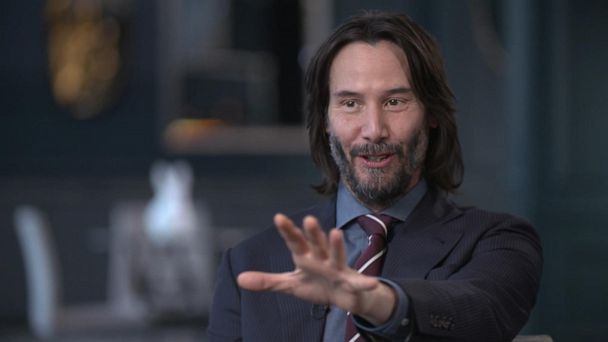 Keanu Reeves is the antithesis of Hollywood stereotypes — he takes public transit, he eschews luxury, and he, apparently, once wore a bustier worn by Dolly Parton.

The Toy Story 4 star recently appeared on Jada Pinkett Smith’s Red Table Talk, and per a recent article about the interview, the conversation quickly turned to Reeves’s unique Halloween attire:

…[the episode] served as a Matrix reunion. Smith appeared in The Matrix Reloaded and The Matrix Revolutions alongside Reeves, and they were joined for the conversation by Reeves’ The Matrix Resurrections costars Carrie-Anne Moss and Priyanka Chopra Jonas.

“So my mother was a costume designer,” Reeves told his collaborators. “She made some costumes for Dolly Parton, and she once did the cover of Playboy, and somehow I guess she didn’t take that home. So we had it, and it was Halloween.”

The Speed star went on to clarify that he did, in fact, wear the famous costume:

“So I put on the ears and the bustier,” he said. “I wore sneakers with fishnet stockings and the bowtie. I had some pretty long hair, and I was Dolly Parton as a Playboy Bunny.”

Reeves did not, however, confirm the current whereabouts of the iconic country singer’s Playboy cover girl outfit.

Reeves was also considered for other roles under the Disney banner, including Yon-Rogg (Jude Law) in Marvel Studios’ Captain Marvel (2019) and Wolverine in X-Men (2000). He was unable to do either of these films due to scheduling conflicts.

There are, however, many rumors that the John Wick leading man will finally be joining both Marvel —  not in Kevin Feige’s Marvel Cinematic Universe, but in Sony Pictures’ Spider-Man spinoff movie, Kraven — and Lucasfilm’s Star Wars franchise in the near future.

Related: Here’s Why ‘Lightyear’ Will Probably Inspire a ‘Woody’ Spinoff

While many fans want Reeves to play “Knights of the Old Republic” Sith Lord Darth Revan [above]. rumors abound that Reeves may actually portray a brand new original dark side character in an upcoming Star Wars movie or series, such as Leslye Headland’s The Acolyte.

At this time, Reeve’s involvement in the Marvel Universe or the Star Wars galaxy remains unconfirmed.

What do you think about Keanu Reeves wearing Dolly Parton’s Playboy costume for Halloween?