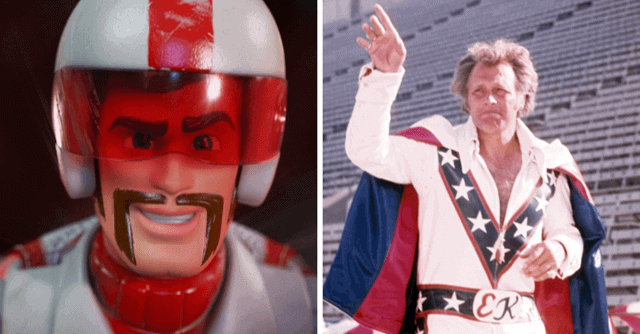 Disney and Pixar are in a bit of hot water due to one of their newest characters in the Toy Story franchise: Duke Caboom.

Duke Caboom is one of the newest characters that was introduced in the latest Toy Story 4 film. Pixar Studios describes Duke Caboom as:

Duke Caboom is a 1970s toy based on Canada’s greatest stuntman. Riding his powerful Caboom stunt-cycle, Duke is always prepared to show off his stunt poses with confidence and swagger. However, Woody learns quickly that Duke has an Achilles heel: He has never been able to do the awesome stunts advertised in his own toy commercial. For years, Duke has been sitting in an antique store, constantly reliving the failures of his tragic past.

The character, voiced by actor Keanu Reeves, offered some great comedic content to the latest Toy Story movie. However, to a lot of viewers, Caboom did share a resemblance to another famous stunt motorcyclist commonly known as Evel Knievel.

As we’ve learned from TMZ, the company K&K Promotions has filed a lawsuit against Disney/Pixar because they feel the resemblance is along the lines of a rip-off.

K&K Promotions happens to own all the rights to Evel Knievel’s likeness, persona, and all over brand. They claim that they were not approached by Disney/Pixar to get approval to base Duke Caboom off of Knievel. The company goes further to allege that all involved with the production of Toy Story 4 were instructed by Disney to refrain from using Knievel’s name during interviews and promotions. A good example of this is the alleged direction by Disney for actor Tony Hale not to use the term “spork” when it came to talking about his character, Forky.

The company is also going after Disney and Pixar for all the merchandising sales made off of Duke Caboom during the height of the film’s success. With Halloween coming up, this could also mean sales from all of the Duke Caboom Halloween costumes.

We will keep you updated on the outcome of this ongoing lawsuit.

What do you think? Do you think Duke Caboom resembles Evel Knievel too much? Let us know in the comments!