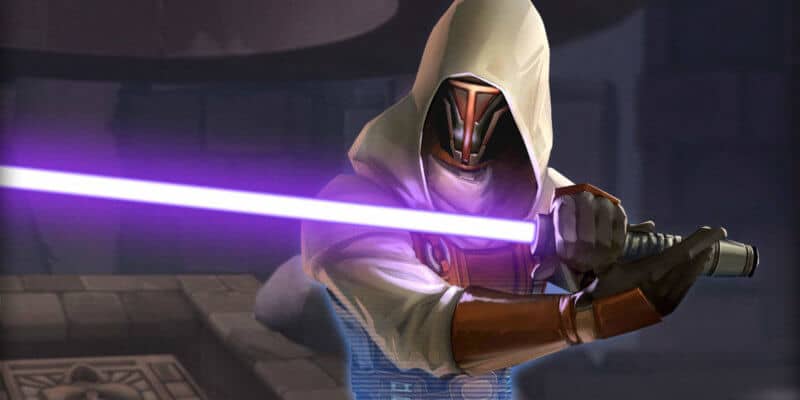 There have been so many rumors surrounding “Knights of the Old Republic” video game character, ancient Sith Lord Darth Revan, finally making his live-action Star Wars debut that it seems inevitable at this point.

Now, a new installment of the HoloNet Maurader podcast indicates that Revan might be appearing in a Star Wars series that has already been confirmed for the Disney+ streaming platform. This means fans might get to see the complex character sooner than they were expecting.

Per a report about the podcast:

“If you’re a fan of Knights of the Old Republic, Darth Revan will be coming back into canon very soon in something Disney+ related,” said Van Dyke [Corey Van Dyke of Kessel Run Transmissions]. “There’s going to be a big push for Sith characters post-Mando. That’s going to be Disney’s big Disney+ slate, starting with The Acolyte. Obviously, the timeline won’t match up, but I know for sure there is concept art out there of [Revan] in a hologram, which I believe is for Acolyte. It will kind of tease his own series eventually.”

It is, of course, important to note that neither Disney nor Lucasfilm has confirmed anything about Revan appearing in Leslye Headland’s The Acolyte, which is to be set during the High Republic era.

This places it hundreds and hundreds of years after Revan existed in the Old Republic and about 200 years before the start of the Skywalker saga in Episode I: The Phantom Menace (1999).

At this time, we know little about the series, except that it will focus on the rise of the dark side at the end of the High Republic age. It could potentially feature Darth Plagueis, the master — and murder victim — of Darth Sidious/Emperor Palpatine. It has no release date.

Furthermore, even if there is concept art of Revan at this time, it certainly doesn’t guarantee it will make it into the final cut of the series. Before Episode IX – The Rise of Skywalker (2019) released, for example, some unused concept art featured a Rebel base in a giant tree and a visit to the home of the Millennium Falcon’s designer!

Nonetheless, the potential of seeing Darth Revan in a confirmed series like The Acolyte is exciting for fans who have long-awaited his live-action debut. The former Jedi Knight turned Sith Lord — who eventually redeems himself and returns to the light side as a Jedi crusader — has a complicated history in “Knights of the Old Republic” Star Wars lore and is extremely popular among fans of the game.

He was introduced into the existing Star Wars canon when his name appeared in Star Wars: The Rise of Skywalker: The Visual Dictionary.

Revan was actually slated to appear in Star Wars canon much earlier than The Rise of Skywalker, though, in a 2011 episode of Dave Filoni’s animated series Star Wars: The Clone Wars (Season 3, “Ghosts of Mortis”), the scene featuring the fan-favorite Sith character was ultimately deleted. Per Wookieepedia:

A-lister Keanu Reeves (John Wick, The Matrix, Speed, the Bill & Ted franchise) has been linked to the role of Darth Revan. Recently, however, reports surfaced that Reeves has actually been cast in another unconfirmed Star Wars project, an animated series featuring a new Sith King named King Valar.

Reeves, who previously worked with Disney when he voiced Duke Caboom in Toy Story 4, is currently working on five projects — The Matrix 4, John Wick 4, John Wick 5, TV mini-series Rain, and Past Midnight.

Related: How Fett Beskar Armor Came to Belong to a Ruthless Sith Lord

There is no word on whether other characters connected to Darth Revan, including Darth Malak, are set to appear in upcoming projects within the Star Wars franchise.

Fans of the Sith, however, can look forward to the imminent return of Dark Lord Darth Vader (Hayden Christensen) in the upcoming Obi-Wan Kenobi series next year. Although Vader, of course, lived long after Darth Revan, the connections between all of the prominent characters in the Sith Empire are impossible to ignore.

Do you hope this report of Darth Revan appearing in the Star Wars galaxy sooner rather than later pans out?