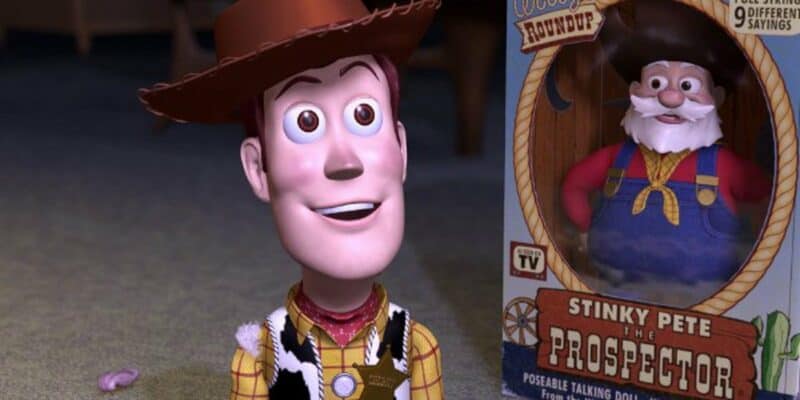 Now that we’ve seen the spectacular trailer for Disney and Pixar’s Lightyear, a CG animated film based on a test pilot named Buzz (voiced by Chris Evans) who ends up going to infinity and beyond, Toy Story fans have quite a few burning questions on their minds.

First of all, which other Toy Story characters will appear in the movie? While Lightyear isn’t about toys whatsoever (within this universe, Chris Evans’ Buzz is the person who inspires the iconic space ranger), it’s still possible we’ll see other Buzz Lightyear-specific characters, like Emperor Zurg and the Little Green Men.

So here’s why Lightyear will probably inspire a ‘Woody’ spinoff…

‘Lightyear’ Will Be a Huge Success

Like every Pixar movie, Lightyear will probably be a huge success – both critically and financially. And the fact that it has strong ties with the Toy Story franchise will certainly help in its favor. That film series alone has grossed over $5 billion worldwide, which explains why the studio was inspired to greenlight this movie in the first place.

While a ‘Woody’ spinoff isn’t necessarily going to be the reaction to the film’s success, it is possible that Disney and Pixar will consider a Lightyear sequel or a spinoff of some kind. Who knows – perhaps there’s already a plan for a ‘Woody’ movie! After all, both characters complement one another, even if Lightyear doesn’t actually star Buzz himself.

Many would argue that Buzz Lightyear (Tim Allen) isn’t even the hero of the Toy Story movies, and they’d be right – that title goes to Woody (Tom Hanks). However, Buzz is the co-star (even if he does get side-lined in Toy Story 4). But while he isn’t the focus, he’s still equally iconic and just as synonymous with Toy Story as Woody is.

It’s no stretch to suggest that Buzz Lightyear and Woody go hand in hand. They’re both law enforcers who have sworn to protect all that is good, and also occupy the same spectrum – they just happen to be at opposite ends! Space Ranger Buzz is a character who operates far out in the cosmos, and Sheriff Woody is from the Old West.

Both characters also have ‘backgrounds’ in the Toy Story movies, which makes it a lot easier for the studio to produce spinoff movies. Buzz is a space ranger who hails from the Gamma Quadrant, a star system teeming with Little Green Men and under threat from Emperor Zurg, while Woody once had his own show in the form of Woody’s Roundup.

While Lightyear doesn’t actually star Buzz as we know him (in other words, a “child’s play-thing”), it does revolve around the ‘real’ Buzz – which is a unique approach. And a ‘Woody’ movie needn’t be any different – it could follow an up-and-coming sheriff who has many similarities to the loyal cowboy doll we fell in love with back in 1994.

‘Woody’ Could Include Other ‘Toy Story’ Characters

Until we learn otherwise, we’ll have to assume that the only Toy Story character who will appear in Lightyear will be the space pilot himself. There are rumors that Emperor Zurg will appear, but there’s currently nothing concrete to confirm this (although we’d be eternally grateful if he did show up, along with the Little Green Men!).

A ‘Woody’ movie, however, could easily incorporate other characters from the Toy Story movies without feeling like they’ve been shoehorned in for the sake of cameos. For starters, the three most obvious ones would be Woody’s roundup – cowgirl Jesse (Joan Cusack), Stinky Pete (Kelsey Grammer), and Woody’s trusted horse Bullseye.

But there are a few more characters who could fit into Woody’s world. Any respectable sheriff would need a loyal dog, and who better than Slinky (the late Jim Varney and Blake Clark). And Woody would probably live on a farm, so Hamm too (John Ratzenberger). As for a love interest, anyone other than Bo Peep (Annie Potts) just wouldn’t feel right!

When Toy Story was released way back in 1994, no one could have predicted that film would become a global phenomenon. And 27 years later, it’s still as huge ever, with three sequels under its belt, waves of merchandise, and a huge presence in Disney Parks in the form of Toy Story Land.

And we weren’t really expecting that many films, either. Although there were some pretty big gaps between each sequel – Toy Story 2 was released in 1999, Toy Story 3 in 2010, and Toy Story 4 in 2019. But then it’s really no surprise that there were years of waiting, not when you consider just how much work goes into making them.

But despite how much we love the franchise, it’s now best left alone. The third movie was an emotional farewell to Woody and his pals, which is why the most recent entry felt a little unwarranted. Nevertheless, as far as sequels go, it was still pretty good, but now it’s time for a new era of Toy Story movies, and what better way to start that than with Lightyear.

We’ll just have to wait and see if Lightyear will be worth the wait. In the meantime, there’s nothing wrong with being self-indulgent and imagining a trailer for the inevitable ‘Woody’ spinoff. We’ve even thought up a movie poster too – an unshaven Woody looking out onto his local town at sunset, above a tagline that reads “You’ve got a friend in him”!

Disney and Pixar’s Lightyear will take us to infinity and beyond on June 17, 2022.

Do you think there will be a solo ‘Woody’ movie?