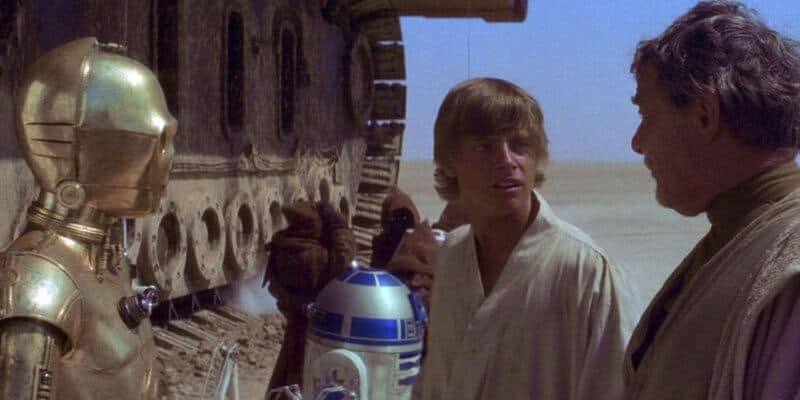 When George Lucas’s original Star Wars movie — now known as Star Wars: Episode IV – A New Hope — debuted in 1977, it shocked everyone with its success.

Lucas and late producer Gary Kurtz, who passed away in 2018, struggled to find a studio to make the movie — although 20th Cenutry Fox/20th Century Studios eventually did — and Fox even made illegal deals to get more theaters to play the film.

Now, of course, A New Hope is one of the most iconic science fiction movies of all time, and Lucas’s galaxy far, far away has spawned countless novels, TV series, and the entire Skywalker Saga.

However, when the movie came out, the very first Star Wars fans had basically no idea what was going on with Jedi Knight Luke Skywalker (Mark Hamill), Princess Leia Organa (Carrie Fisher), Han Solo (Harrison Ford), and their droids R2-D2 (Kenny Baker) and C-3PO (Anthony Daniels).

They, much like Star Wars fans today, were left to come up with theories to help explain everything that wasn’t clarified in the first film — namely, who exactly was Luke Skywalker’s father?

Although everything was clarified in Star Wars: Episode V – The Empire Strikes Back (1980) — arguably the greatest sequel film of all time — there was a three-year period in which Star Wars fans had nothing but time on their hands, and plenty of imagination about who “Old Ben” Kenobi AKA Obi-Wan Kenobi (Alec Guinness) had been talking about when he told young Luke about his heroic Jedi Knight father.

CBR shared details about the strangest theory that emerged in the years between A New Hope and the iconic Darth Vader (David Prowse/James Earl Jones) “No, I am your father” scene in ESB:

According to this wild fan theory, R2-D2 was not a droid, but a cyborg. In other words, he was part droid and part human, with the human part being whatever remained of Luke’s father after his duel with Darth Vader. This meant that when Obi-Wan told Luke that Vader had murdered his father, he was telling the truth from Vader’s perspective. The Sith Lord thought that he killed Skywalker, but in reality, enough of the man’s brain had survived to be preserved with the help of robotics.

Although this theory seems bizarre to us today, keep in mind that these 1970s Star Wars fans didn’t have the 40 years of lore that we do to help shape their speculation about the Star Wars story. As CBR noted, this theory:

..could’ve shown why R2-D2 was so important to the Rebel Alliance. If Skywalker was such a great Jedi warrior, then he would have been helpful to the Rebels as they fought against Vader’s Empire. It also helped to explain why Luke was able to progress through his initial Jedi training so fast. He quickly learned how to deflect blaster bolts with his lightsaber and was later able to communicate with a deceased Obi-Wan, even though he had only been using the Force for a few days. If Anakin was covertly hiding inside of R2-D2, it meant that he could have been helping his son all along…

Although this somewhat wild Star Wars fan theory did not prove to be true, it’s fascinating to consider that not much has changed in the Star Wars universe over the course of four decades — we still love to speculate and, sometimes, we’re still wildly wrong.

Per McGregor, we are also likely to learn more about Luke’s childhood on Tatooine with Aunt Beru (Bonnie Piesse) and Uncle Owen (Joel Edgerton) in the years prior to A New Hope.

You can currently watch A New Hope on Disney+ anytime. The official description reads:

What do you think about this crazy Luke Skywalker and R2-D2 theory?