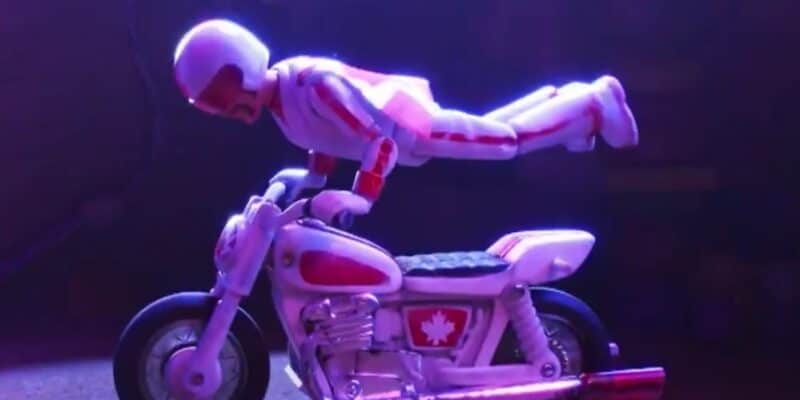 In 2019, Pixar introduced the fourth and probable final film in its incredibly popular Toy Story franchise. The film saw Buzz, Woody, and all of their friends embark on a cross-country road trip with Bonnie and her new “toy” Forky. However, things go haywire when Woody sees a toy — and love interest — he thought was gone forever, Bo Peep and her loyal sheep.

While Forky was the main new toy that audiences were introduced to, he was not the only one. A big part of the film takes place in an antique store, where Woody meets a number of other interesting and neglected toys. One of those toys is Duke Caboom, voiced by Keanu Reeves — a stunt toy from the 1970s who is supposed to perform amazing jumps and tricks, but he can’t, which is why he sits on a store shelf.

The character of Duke Caboom reminded a lot of people of the famous stuntman Evel Knievel, including his own family and their company, which owns the rights to Evel Knievel’s likeness, persona, and brand, K&K Promotions. In fact, K&K Promotions believed that Disney/Pixar completely ripped off Knievel’s resemblance and filed a lawsuit against the studio giant.

K&K Promotions claimed that they were never approached by Disney/Pixar when it came to the character of Duke Caboom. They also claimed that Disney instructed everyone involved in the production to refrain from using Evel Knievel’s name when talking about the character while doing press and interviews.

In addition to suing for Disney using Evel’s persona without permission, the company also sued for all of the money that Disney made off of the character in merchandise sales.

Unfortunately for the family, a Las Vegas judge has dismissed the trademark lawsuit against Walt Disney Motion Pictures. Per a report by Click Orlando News 6:

The judge wrote that while the Caboom character was “reminiscent” of Knievel, “Disney’s use of Evel Knievel’s likeness contains significant transformative elements” and is not a literal depiction…

The judge said the film character has a different name and clothing, is Canadian rather than American, and wears a mustache and different hair color and style than Knievel.

“Duke Caboom is not a carbon copy of Evel Knievel minus a few details,” Mahan wrote. “The Duke Caboom action figure is a representation of Disney’s expression in the film and not an attempt to imitate Evel Knievel.”

Knievel’s daughter, Kelly, said that the family was disappointed in the ruling and that they would be looking into all legal avenues they could pursue at this time. The family is currently considering appealing the decision through 9th Circuit Court of Appeals in San Francisco.

At the time of publication, Disney has not commented on the dismissal.

What do you think of the judge’s ruling? Let us know in the comments!