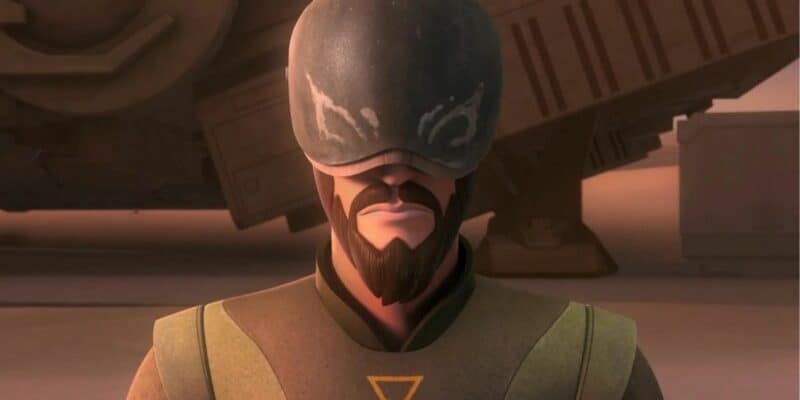 Many fans assume that the most powerful beings in the Star Wars universe are the Jedi, but the truth is that there are many other beings that are equally, if not more, powerful — especially those highly attuned to the Force. And some of those beings are also among the most mysterious.

Star Wars: Rebels (2014 — 2018) is known for having introduced some unique concepts to the faraway galaxy, from the purrgil, one of the most powerful semi-sentient creatures in the franchise, to the World Between Worlds, a mystical realm where time-travel is possible.

But the show is also home to a character that many fans may not be familiar with, and one whose abilities and powers would put even the purrgil to shame (the giant, whale-like creatures that can travel through the cold vacuum of space without protection, and can even jump into hyperspace!).

That character is Bendu (voiced by Doctor Who’s Tom Baker), a huge, Force-sensitive being. Bendu is a sentient creature who is seemingly the only one of his kind, however, the name of his species is not known. In Rebels, he resides on the remote planet of Atollon.

Bendu is exclusive to the hit animated show, having only appeared in a total of six episodes, and despite Rebels being incredibly popular, he is relatively unknown. So here’s everything you need to know about one of the most powerful beings in the faraway galaxy…

He is Neither Jedi or Sith

In the two-part Season 3 premiere, “Step Into Shadow”, Ezra Bridger (Taylor Gray) — who has become more powerful since Season 2 — leads a mission to rescue Hondo Ohnaka (Jim Cummings), while Grand Admiral Thrawn (Lars Mikkelsen) steps in as the new antagonist of the show.

Meanwhile, Kanan Jarrus (Freddie Prinze Jr), who is now blinded after being attacked by Maul (Sam Witwer) in Season 2, visits Atollon, the site of an early rebel base, to meditate and learn how to wield both his lightsaber and the Force without sight.

After hearing strange voices, Kanan discovers the large creature known as Bendu, who was blended in with the landscape. Bendu, who is revealed to also be a Force wielder, tells the Jedi that his “imbalance” has awoken him from slumber.

The creature also explains that he sits somewhere “between” the Jedi and the Sith. Following their encounter, Bendu helps Kanan to become attuned to his other senses by rendering him vulnerable to attack from deadly creatures that persistently threaten the rebel base, known as the Krykna.

He Has Visions of the Future

In Season 3’s “The Holocrons of Fate”, the Ghost crew deals with Maul’s return, while Ezra joins Kanan on Atollon so that he can meet Bendu. But he is nowhere in sight, and the two Jedi are attacked by a swarm of Krykna. Bendu soon appears, and frightens the creatures away.

Ezra tells Bendu that Maul is after both the Sith holocron and the Jedi holocron, and is intent on converging the two. Bendu warns that, while this grants one with the power of visions, it can also bring about destruction.

Using the Force, Bendu hides the Sith holocron in the Krykna nest underground, and sends Kanan and Ezra on a trial to retrieve it, but without the use of their lightsabers. Inside the cave, Ezra must learn how to master his senses and not rely on weapons to succeed.

After successfully retrieving the Sith holocron and emerging from the cave, we learn that Bendu is able to see into the future, as he warns the two Jedi that one of them will end up helping Maul to open the Jedi holocron, which happens later in the episode, with both Maul and Ezra present.

He’s More Powerful Than the Jedi

The epic two-part Season 3 finale, “Zero Hour”, sees the rebels plotting to attack an Imperial base on Ezra’s home planet, Lothal, while Thrawn has discovered their secret base on Atollon, which leaves Bendu angry with Kanan for having brought war to his peaceful world.

Kanan asks the enraged Bendu for help, but as a being who takes no sides, he refuses, suggesting that such events are beneath him. He also tells Kanan that he will live on, that there is no purpose for the Empire having found Atollon.

Kanan refuses to give up easily, fearful that his friends will be killed by Thrawn and his forces. But when he calls Bendu a coward, the Force being becomes even more enraged, telling Kanan that he “carries out the will of the Force”. He then creates a supernatural storm and disappears.

Bendu later returns in the form of a lightning storm, and attacks both the rebels and the Imperials, while speaking in the clouds. Thrawn’s forces fire at Bendu, who falls from the sky. Before disappearing, Bendu accurately prophesizes Thrawn’s downfall at the end of Season 4.

While Bendu hasn’t appeared in any Star Wars material since Rebels, it remains entirely possible that he’s yet to show up in future canon, with the upcoming live-action Ahsoka (TBA) series being the most likely place.

After all, the show is shaping up to be a sequel to Rebels, with the premise expected to involve Ahsoka Tano’s (Rosario Dawson) search for Jedi Knight, Ezra Bridger, with the help of Mandalorian Sabine Wren (Natasha Liu Bordizzo).

Fans are also hoping that the show will introduce the World Between Worlds in live action (which may explain Ahsoka’s whereabouts during the original trilogy), which will lend to the possibility of the sequel trilogy being retconned from canon.

Either way, there’s a lot of speculation around the possibility of time-travel being introduced in live-action Star Wars, whether it’s in Ahsoka, or The Mandalorian Season 3 (TBA), which many believe will, at some point, do a major time-jump.

Either way, Ahsoka definitely appears to be borrowing plenty from Rebels, so it’s possible we’ll see other characters brought to life in live action, such as Kanan Jarrus (who could only appear as a Force Ghost or in flashbacks), Zeb, and Hera Syndulla.

As for Bendu, we’ll just have to wait and see, but we don’t doubt for one second that Ahsoka will be heavily centered around the many mysteries of the Force. But if he does show up, like a number of other concept fans are hoping to see, it could be a game-changer for Star Wars.

Upcoming shows include Obi-Wan Kenobi (2022), Andor (2022), Ahsoka, and a recently announced and as yet untitled Star Wars animated series (TBA).

Do you think Bendu will return in one of the live-action Star Wars shows?

Comments Off on Will This INSANELY Powerful Force-Sensitive Being Ever Return to ‘Star Wars’?