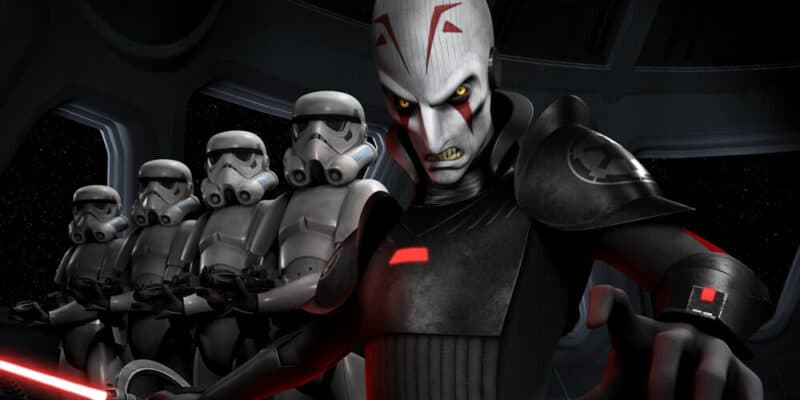 Sabine Wren, another Rebels Ghost Crew character, will be played in live-action by Natasha Liu-Bordizzo despite fans’ please for voice actress Tiya Sircar to handle the role. And, Jedi Knight Ezra Bridger is set to be portrayed by Aladdin (2019) leading man Mena Massoud rather than Rebels voice talent Taylor Gray.

The outlier, of course, is Katee Sackhoff’s Bo-Katan Kryze. The Battlestar Galactica alum plays her Star Wars character in both animation and live-action.

Now, it seems that another popular Rebels character, this time a villain, will be recast for his live-action debut.

According to a new report, Rupert Friend (The Young Victoria, Pride & Prejudice) will reportedly play Darth Vader’s Grand Inquisitor in Obi-Wan Kenobi. While it was previously confirmed that the actor would be in the special event series, his role was unknown.

As excited as most Star Wars fans are to see the Inquisitorius in Deborah Chow’s new show, many were hoping Rebels voice actor and Oscar nominee Jason Isaacs (Muse, Harry Potter) would handle the role. And, some have taken to social media to express their disappointment.

Mark T responded to a report about the casting news with simply:

The Book of Windu found some humor in the situation:

It’s worth noting that Isaacs expressed last year that he would be open to portraying his Star Wars role again:

At this time, Lucasfilm has not officially confirmed who Friend will play in Obi-Wan Kenobi.

More on the Grand Inquisitor

The official Star Wars Databank describes the Grand Inquisitor as:

Not much is known about the Empire’s Grand Inquisitor. A Pau’an male, he was tasked by Darth Vader to hunt down any surviving Jedi Knights. The Inquistor was an intimidating figure, dressed in all black and wielding a red, double-bladed lightsaber. After several encounters with Kanan Jarrus and his Padawan Ezra Bridger, the Inquisitor died in a lightsaber duel with Kanan – but warned the rogue Jedi that his victory had unleashed something terrible.