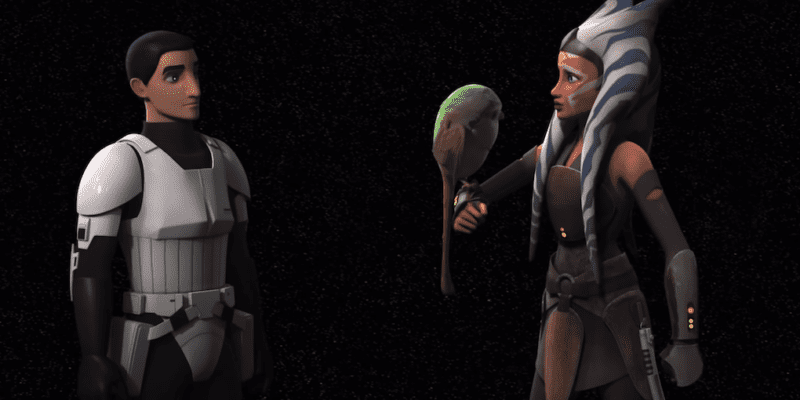 If you’ve ever watched Dave Filoni’s popular animated series Star Wars Rebels, there are probably a few storylines that stick in your mind — however, for many fans, the World Between Worlds remains one of the most iconic arcs, largely due to the fact that it introduced time travel to the Star Wars story for the first time.

The World Between Worlds, which can also be referred to as the Vergence Scatter, was a mystical Force plane that presented as a series of physical doors and pathways existing between time and space, linking all moments in Star Wars history, and allowing a lucky few to travel between them.

The Sith’s designs were thwarted when the Jedi Padawan Ezra Bridger [voiced by Taylor Gray] discovered world’s key, and was able to unlock and enter the World Between Worlds first. After saving Ahsoka Tano [voiced by Ashley Eckstein/portrayed in live-action by Rosario Dawson] from the past by pulling her into the realm, Bridger became adamant in also changing the fate of his master, Kanan Jarrus [voiced by Freddie Prinze, Jr.]. However, Tano reasoned with the Padawan that they would all be dead without Jarrus’ selfless sacrifice, telling Bridger that she understood the pain of being unable to save one’s master, citing her own experiences, and taught Ezra Bridger to let go. Turning away, the pair resolved to close the portal to the realm to prevent others from accessing it, only to encounter Darth Sidious, who tried to enter the realm using the Force users.

In the episode, Bridger visits the Jedi Temple on Lothal, but finds himself in a strange new dimension he’s never seen before. The seemingly endless walkways ultimately led the young Jedi Knight to intervene in the Rebels Season 2 event in which Anakin Skywalker’s Padawan, Tano, had a lightsaber battle with Darth Vader, ultimately allowing Bridger and his Jedi Master Kanan Jarrus (voiced by Freddie Prinze, Jr.) to escape, eventually finding their way back to Hera Syndulla’s (voiced by Vanessa Marshall) Ghost ship.

From The Mandalorian Season 2, Episode 5 (“Chapter 13: The Jedi”), we know that Ahsoka Tano is searching for her fellow Jedi Bridger and Grand Admiral Thrawn (voiced by Lars Mikkelsen) — with whom Bridger disappeared in the Rebels series finale.

This brings us to the recent announcement that Hayden Christensen will not only be reprising his prequel trilogy role as Anakin Skywalker/Darth Vader in Ewan McGregor’s upcoming Obi-Wan Kenobi special event series — directed by The Mandalorian director Deborah Chow — but in Favreau and Filoni’s Mandalorian spinoff show, Ahsoka, as well.

Since many believe Ahsoka will function as a Rebels sequel, this certainly opens the door — pun intended — for the World Between Worlds to make its live-action debut in another Filoni show. While it is certainly possible that Christensen’s appearance will be nothing more than a standard flashback scene, don’t put it past Filoni and the team to use this prime opportunity to bring time travel to the live-action Star Wars universe by having Tano visit the World Between Worlds in her quest to find Bridger.

Related: Premiere Date For the “Next Chapter” of ‘The Mandalorian’ CONFIRMED

Intriguingly, Mandalorian leading man Pedro Pascal (Din Djarin) has previously indicated that there will be a timeline jump somewhere in the “Mando-verse” moving forward, but it is unknown what he was specifically referring to.

For now, all we can do is wait and wonder, but there are undoubtedly some great storylines coming down the pipeline as the Star Wars franchise continues to expand.

Do you want to see the World Between Worlds in live-action?