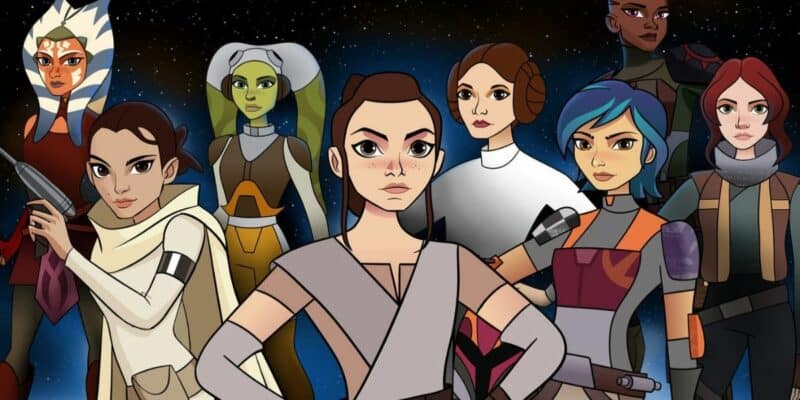 It’s a fair assumption that the Marvel Cinematic Universe is busier than Star Wars these days. After all, it currently has 27 movies under its belt (and counting), while there are only 12 Star Wars movies (although, to be fair, the MCU has overtaken all multi-movie franchises since 2008).

But Marvel isn’t winning the race where television is concerned, as the faraway galaxy boasts more on the smaller screen that you might have known. Sure, in terms of live action, we only have The Mandalorian (2019 — 2020) and The Book of Boba Fett (2021) so far.

However, once you throw the Star Wars animated shows into the mix, that number jumps up quite a bit. In fact, the number of Star Wars TV shows currently streaming on Disney+ are in the double-digits! But which ones are actually canon?

It’s a word that’s often thrown around quite a bit, especially when it comes to Star Wars. But this is no surprise, because since Disney purchased Lucasfilm in 2012, most pre-merger material (but not all) is no longer considered canon, and has been dubbed “Star Wars Legends”.

So let’s take a look at which Star Wars TV shows are canon, and which aren’t (we’ve decided to leave out all the LEGO Star Wars stuff, seeing as that’s definitely not canon!).

A long time ago (in the 1980s), you might remember an animated series called Star Wars: Droids (1985 — 1986). And if you haven’t already guessed, the series follows the adventures C-3PO (Anthony Daniels) and R2-D2 as they encounter all sorts of dangers in the faraway galaxy,

Since Disney purchased Lucasfilm in 2012, the show is longer canon, and has been retroactively set between the prequel trilogy (1999 — 2005) and the original trilogy (1977 — 1983). But either way, Droids is now available on Disney+ as part of the Star Wars Vintage collection.

And the star of the show is none other than the most well-known Ewok, Wicket W. Warrick (Jim Henshaw), along with several Ewoks unique to the series. Ewoks also takes place before Star Wars: Episode IV — A New Hope (1977), and like Droids, is now part of Star Wars Legends.

Even the most hardcore fans of long-running animated series Star Wars: The Clone Wars (2008 — 2020) tend to overlook the excellent miniseries (2003 — 2005) it was developed from. This set of shorts depicts the wars using striking animation and thrilling music.

And you can expect all your favorite prequel trilogy-era Star Wars characters, from Master Yoda (Tom Kane) to Count Dooku (Corey Burton). However, now that the long-running version is absolutely canon (and rightly so), it leaves very little space for the miniseries to fit in.

Star Wars: The Clone Wars takes place in the three years between Star Wars: Episode II — Attack of the Clones (2002) and Star Wars: Episode III — Revenge of the Sith (2005). Using a huge roster of characters, it casts a greater lens over the struggle between the Republic and the Separatists.

Star Wars: Rebels (2014 — 2018) is set 14 years after The Clone Wars, and follows a group of rebels that slowly becomes the spark that lights the fire that ultimately brings the Galactic Empire down. Spanning six years, Rebels ends some time after the original Star Wars trilogy.

Star Wars: Resistance (2018 — 2020) is the most far-reaching Star Wars TV show, taking place shortly before and during the Star Wars sequel trilogy (2015 — 2019). It follows a young character named Kaz (Kazuda Xiono) who is recruited to join the Resistance as a starfighter.

But Resistance is among the most short-lived Star Wars TV shows, which is largely because there was really nowhere for it go when the sequel trilogy ended. Nevertheless, it’s as canon as Disney’s three sequels (which we appreciate many fans are still coming to terms with!) If you’re a fan of those films, though, you’ll be pleased to know that Resistance includes Poe Dameron (Oscar Isaac) and BB-8.

Some shows tend to get lost in the crowds that’s made up of the likes of The Clone Wars and the live-action shows. One of those shows is Star Wars: Forces of Destiny (2017 — 2018), a micro-series that features strong female Star Wars characters that span the Star Wars franchise.

Characters who are given the animated treatment include Princess Leia (Shelby Young), Padme Amidala (Catherine Taber), Rey Skywalker (Daisy Ridley), and Jyn Erso (Felicity Jones) from Rogue One: A Star Wars Story (2016). As such, the series spans multiple Star Wars eras. While it’s all very light-hearted (and each episode very short), you’ll be surprised to know that Forces of Destiny is actually canon.

The first live-action Star Wars TV show takes place in the aftermath of the fall of the Empire, some five years later. It follows formidable bounty hunter Din Djarin (Pedro Pascal), who is forced to go on the run when he returns to rescue his latest bounty from the client.

But Mando isn’t alone — his allies include Cara Dune (Gina Carano), Greef Karga (Carl Weathers), Boba Fett (Temuera Morrison), Bo-Katan (Katee Sackhoff), and, of course, Grogu! Without a shadow of a doubt, The Mandalorian is canon, and has become the stepping stone for other live-action projects, with The Book of Boba Fett being the latest.

Star Wars: The Bad Batch (2021) isn’t just a spiritual successor to The Clone Wars — it also has the same style of animation, and even picks up where that series ends. This time, however, we focus on the clones themselves — in particular, Clone Force 99, a group of ‘defected’ clones.

Joining Hunter, Tech, Echo, and Wrecker (all of whom, including Crosshair, are voiced by Dee Bradley Baker) is young clone Omega (Michelle Ang). Together, they flee the Galactic Empire in the wake of Order 66 and try to make their way in the galaxy. As a sequel to The Clone Wars, we think this one speaks for itself.

Star Wars: Visions (2021) is a refreshing change from the norm, as it’s the first Star Wars TV show of recent times that isn’t necessarily considered canon (although many episodes don’t interfere with established canon). The series, which spans large parts of the Star Wars timeline, is made of up of nine episodes, none of which are interconnected.

Created by seven Japanese animation studios, Visions is a collection of unique stories set in the faraway galaxy. Even if anime isn’t for you, it’s worth checking out the episode “Lop and Ocho” alone, which follows a young Lepi named Lop (Anna Cathcart) during the reign of the Empire.

Following on from The Mandalorian, spin-off show The Book of Boba Fett sees the return of everyone’s favorite bounty hunter Boba Fett (Temuera Morrison), previously thought dead having fallen into a Sarlacc pit in Return of the Jedi. But Boba is determined not to go back to his old ways, and instead becomes the new ruler of Jabba the Hutt’s territory on Tatooine.

Boba faces a number of new enemies, though, with the formidable Pyke Syndicate being among them. But he has plenty of alliances too, including Fennec Shand (Ming-Na Wen), the “Mod Gang” (led by Sophie Thatcher), gladiator Wookiee Black Krrsantan (Carey Jones), and even a pet rancor!

The faraway galaxy is set to become even bigger, with upcoming live-action shows like The Mandalorian Season 3 (TBC), Obi-Wan Kenobi (2022), Andor (2022), and Ahsoka (TBC) soon making their way onto Disney+. So it’s fair to say the Force is about to get even stronger on the small screen.

Every entry on this list is now available on Disney+, along with all the Star Wars movies and a number of behind-the-scenes documentaries.

Have you watched all these Star Wars TV shows, or do you tend to avoid the non-canon material?

Comments Off on Which ‘Star Wars’ TV Shows on Disney+ Are Canon?