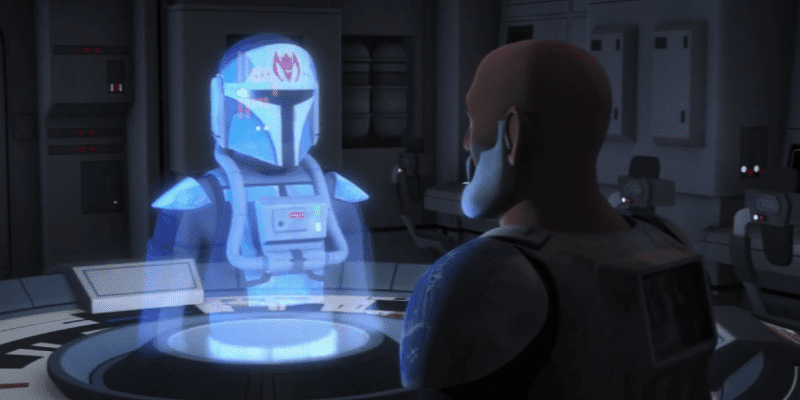 Now, it seems that Filoni and Mandalorian creator Jon Favreau are committed to bringing live-action Rebels characters into the “Mando-Verse.”

Sabine Wren has also been confirmed for the series. She will be played by Natasha Liu-Bordizzo in her live-action debut.

Now, another Rebels actor has thrown his hat in the ring for a future live-action appearance.

McKidd replied, “I agree!” to a Tweet that reads:

Related: ‘Star Wars’ Fans Blow Up the Internet, “1% Boba Fett…This Is the Way”

Although several voice actors, including Ashley Eckstein — the popular star behind Ahsoka Tano in Rebels and Star Wars: The Clone Wars — were replaced in live-action, Katee Sackhoff portrays Bo-Katan Kryze in both the Mandalorian saga and animation, so there is a precedent for McKidd to return.

Fans were ecstatic at the prospect of seeing Rau come to life, with Silas Morgan writing:

Fenn Rau is my favorite character in Rebels that isn’t part of the main group.

Definitely need you in season 3.

Fenn Rau is my favorite character in Rebels that isn't part of the main group.

Definitely need you in season 3.

I was just tweeting that this morning! @dave_filoni, the viewers NEED this! Winking face Much love to you both!

I was just tweeting that this morning! @dave_filoni, the viewers NEED this! 😉 Much love to you both!

While not much is known about The Mandalorian Season 3 at this time, the return of Din Djarin (Pedro Pascal) and the Darksaber in The Book of Boba Fett’s fifth installment — “Chapter 5: The Return of the Mandalorian” — did give some clues, and we can expect the titular bounty hunter to make his way back to his home world at some point after The Armorer (Emily Swallow) informed him he is “a Mandalorian no more” after breaking “the Way of the Mandalore” by removing his helmet.

The only way to atone is by visiting the living waters in the now-destroyed mines under Mandalore.

This could be the perfect opportunity for Rau to show up. One rumor about The Mandalorian Season 3 — which is currently filming — indicated that it will feature an epic scene with 75 Mandalorians coming alongside Djarin.

Veteran of the Clone Wars and a respected warrior, Fenn Rau led the Protectors of Concord Dawn with a combination of honor and ruthlessness. During the Clone Wars, he served as a flight instructor for the clone army and fought in many clashes, including the Battle of Mygeeto. After the rise of the Empire, however, he accepted payment to act in service of the Imperials. It was not until he met with — and was captured by — the Ghost crew’s Kanan and Sabine that he came to align with the rebels.

Do you want to see Fenn Rau in the live-action Star Wars galaxy?