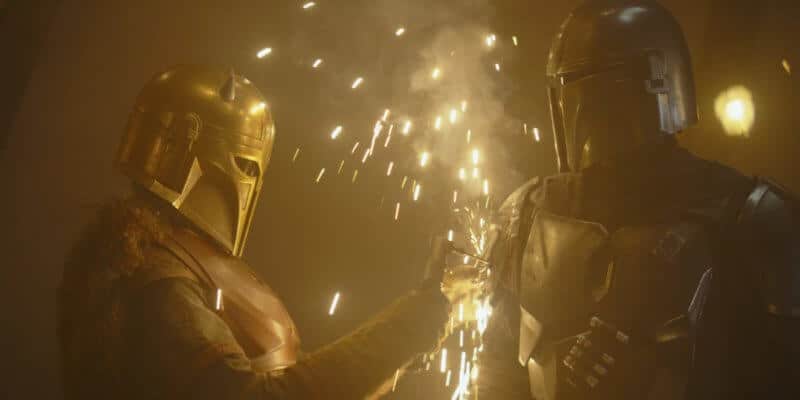 Now, in the fifth episode of The Book of Boba Fett (“Chapter 5: The Return of the Mandalorian”), showrunners Robert Rodriguez, Jon Favreau, and Dave Filoni have started tying the “Mando-Verse” together in a huge way.

In the aforementioned Season 2 finale (“Chapter 16: The Rescue”), Djarin and his tiny foundling were separated for the first time since we met them in the show’s debut on November 12, 2019. The stoic bounty hunter completed his quest to return Grogu to his own kind, giving Skywalker his blessing to become the 50-year-old infant’s Jedi Master.

Related: The Biggest ‘Star Wars’ Movie of the 21st Century Is Probably Happening

In doing so, Djarin removed his helmet, officially breaking “the Way of the Mandalore” for the first time. While Djarin previously showed his face in the Imperial outpost with Migs Mayfeld (Bill Burr) in “Chapter 15: The Believer,” it has been argued that he didn’t actually violate “the Way” on this occasion.

However, there is no doubt that he did not honor his Creed when he allowed Grogu to touch his face before the two parted ways.

Now, we’ve seen the implication of this choice.

**SPOILERS FOR THE BOOK OF BOBA FETT SEASON 1, EPISODE 5 (“Chapter 5: Return of the Mandalorian”) BELOW*

The Book of Boba Fett Episode 5 kicks off with a bang — or, rather, a slice — when Djarin wields the Darksaber to defeat a corrupt employer who was illegally hoarding New Republic credits.

The bounty hunter is injured in the fray and ultimately seeks aid from The Armorer (Emily Swallow), who dispatches Paz Vizsla (Tait Fletcher/voiced by Jon Favreau) to tend to Djarin’s wounds. During the scene, The Armorer inquires about what type of weapon caused such an injury, at which point Djarin hands over the Darksaber.

A brief history of the ancient Mandalorian weapon — which was created by the first Mandalorian Jedi, Tarre Viszla — follows. Ultimately, Viszla challenges Mando to a duel, claiming that he is, in fact, the rightful owner of the black-bladed saber since it was forged by House Vizsla thousands of years before, and was, at one point wielded by Sackhoff’s Kryze, who tried to lay claim to Mandalore “by blood” and with the weapon.

Djarin wins the battle, but finds himself in a challenging situation when The Armorer asks, “Have you ever removed your helmet?” He eventually answers honestly and is told “You are a Mandalorian no more.”

When the fan-favorite character asks how he can atone for his actions, he is told that the only option is to seek the “living waters” in the mines under Mandalore. The mines, however, have been destroyed, posing a somewhat pressing problem.

Intriguingly, as the installment continues, Djarin neither removes his helmet nor denounces the Mandalorian creed. As a matter of fact, while boarding his transport to Tatooine — where his obtains his Razor Crest replacement, a Naboo N-1 Starfighter from Peli Motto (Amy Sedaris) — Djarin balks at removing his weapons because “I am a Mandalorian, weapons are part of my religion.”

It’s clear that Djarin’s identity still lies in being a Mandalorian, even if his tribe no longer claims him as one of their own, but it will be interesting to see what happens moving forward, particularly if he joins forces with Boba Fett (Temuera Morrison) and Wen’s mercenary assassin Shand in next week’s penultimate Season 1 episode.

Interestingly, neither Fett nor Shand played much of a role whatsoever in this week’s Bryce Dallas Howard-directed installment of The Book of Boba Fett — Fett didn’t even appear, while Shand made a cameo in the final scene — but fans seemingly wouldn’t have it any other way.

Have you watched Episode 5 of The Book of Boba Fett?