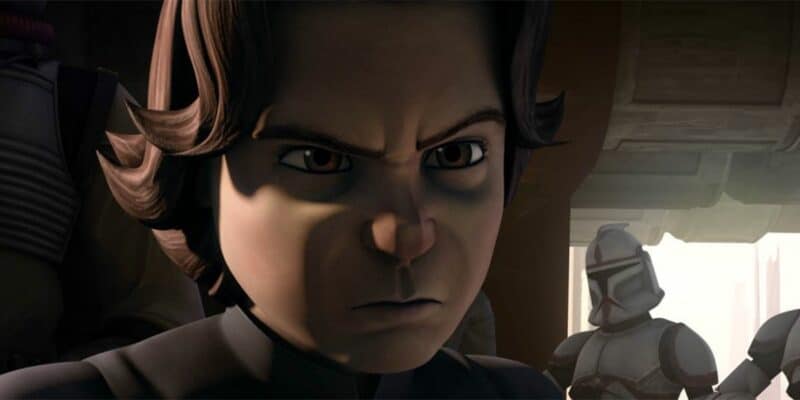 The Book of Boba Fett (2021 — 2022) has given fans a lot of insight into the iconic character, despite the fact that “Chapter 5: The Return of the Mandalorian” doesn’t even feature Boba Fett (Temuera Morrison), while “Chapter 6: From the Desert Came a Stranger” has only a fleeting cameo!

Nevertheless, the show has answered questions such as how Boba escaped the Sarlacc pit, as well as his time with the Tusken Raiders, all of which has been told through flashbacks. But what about those flashbacks of Boba as a young boy (Daniel Logan) in the cloning facilities on Kamino?

Throughout the show, Boba dreams of his time as a young boy on his homeworld, as he watches his father, Jango Fett, fly off into stormy skies. These scenes take place either before or during the early events of Star Wars: Episode II — Attack of the Clones (2002).

There’s also a scene where young Boba picks up his father’s helmet, moments after he was decapitated by Mace Windu (Samuel L. Jackson), as seen in Attack of the Clones. Jango Fett is also played by Temuera Morrison, as he is the ‘source clone’ for the Grand Army of the Republic.

But while you might be the biggest Boba Fett fan, it’s possible you’ve still not gotten round to watching the animated show Star Wars: The Clone Wars (2008 — 2020), which takes place between Attack of the Clones and Star Wars: Episode III — Revenge of the Sith (2005).

Yes, The Clone Wars, which spans the three years between the two movies in George Lucas’ prequel trilogy (1999 — 2005), features Boba Fett, but he is of course only a young boy (Dee Bradley Baker). So if you think the live-action show is the only place where you’ll learn more about Boba, think again!

In fact, now that most pre-2012 Star Wars material is no longer considered canon, the hit animated show is the only place left, besides of course the prequel trilogy, the original trilogy (1977 — 1983), and the live-action shows, where you can learn more about Boba Fett — at least in the medium of TV and film.

So here are five episodes from The Clone Wars that you need to watch in order to properly complete your viewing of The Book of Boba Fett!

Boba Fett makes his first appearance in Season 2, fresh from having seen his father, Jango, executed by Jedi Master Mace Windu (Terrence Carson). In “Death Trap”, the orphaned clone infiltrates a Republic cruiser with a group of other young clones.

Boba intends on avenging his father’s death by assassinating Mace Windu. As we know, he isn’t successful, but this is an interesting insight into Boba Fett’s state of mind after he loses his father. These decisions also end up determining his career choice for the next few decades.

Boba Fett returns in “R2 Come Home”, which finds Anakin Skywalker and Mace Windu trapped in the wreckage of a ship. Their only hope of escaping alive? R2-D2, of course, who must evade a gang of bounty hunters led by Aurra Singh (Jaime King) and Boba Fett!

“R2 Come Home” is the second part of a three-part story arc, preceded by “Death Trap” and followed by “Lethal Trackdown”. This episode finds Boba during his early days as a bounty hunter, working alongside the Trandoshan Bossk (Dee Bradley Baker) from the original trilogy.

“Lethal Trackdown” follows on from “R2 Come Home”, serving as the finale in this three-part story arc that features Boba Fett. This time, Jedi Master Plo Koon (Gregg Berger) and Ahsoka decide to track down Boba Fett, while Anakin Skywalker and Mace Windu recover from their injuries.

We learn just how vengeful Boba Fett is in this episode, and things reach an explosive conclusion between the bounty hunter and the Jedi. But when he refuses to execute innocent hostages, we get to see a more human side to him, and he later even expresses his regret to the Jedi for all the destruction he has caused.

Related: Did ‘The Mandalorian’ Just Save Grogu from Kylo Ren?

“Deception” is the first in a four-part story arc, followed by “Friends and Enemies”, “The Box”, and “Crisis on Naboo”. However, Boba Fett only actually appears in the first episode, and it isn’t for very long. Nevertheless, “Deception” finds him a little older than when we last saw him.

When Obi-Wan Kenobi fakes his death so that he can go undercover as ‘Rako Hardeen’ (James Arnold Taylor) in a Republic prison to investigate a plot to kidnap Chancellor Palpatine (Ian Abercrombie), he encounters Boba Fett, who starts a fight with him (believing he’s Hardeen, of course), for taking his bounty. We also see Cad Bane (Corey Burton) in the prison, who made his live-action debut in The Book of Boba Fett!

“Bounty” is the first in a four-part story arc, which revolves around Asajj Ventress (Nika Futterman) and Maul (Sam Witwer). With the Nightsisters all dead, Asajj Ventress decides to become a bounty hunter but is surprised to find her new team is led by a seemingly inexperienced teenager, Boba Fett.

They clash and Ventress even tries to Force-choke Boba! This episode does a great job at showing how independent Boba has quickly become, even if it is the last time we see him in The Clone Wars.

The Mandalorian Season 3 is expected to arrive this year, but it could be 2023. Whether or not Boba Fett will show up, though, remains to be seen, but we’d be surprised if he didn’t, considering some episodes in The Book of Boba Fett have revolved largely around Din Djarin (Pedro Pascal)!

With that said, the show was dubbed “The Mandalorian Season 2.5” and The Book of Boba Fett is clearly settling into that status! On the other hand, it’s possible that the younger and animated version of Boba Fett will return in Star Wars: The Bad Batch Season 2 (2021), which is set sometime after Order 66 and also serves as a sequel to The Clone Wars.

After all, Dave Filoni’s series did reveal that Boba Fett had a sister in the form of Omega (Michelle Ang) — who just so happens to have already crossed paths with the mercenary Fennec Shand (Ming-Na Wen) and Cad Bane — so it wouldn’t be a stretch for the iconic bounty hunter to appear in The Bad Batch Season 2.

Have you already seen these five Boba Fett episodes from Star Wars: The Clone Wars?

Comments Off on Watch These 5 Episodes From ‘Star Wars: The Clone Wars’ to Complete ‘The Book of Boba Fett’