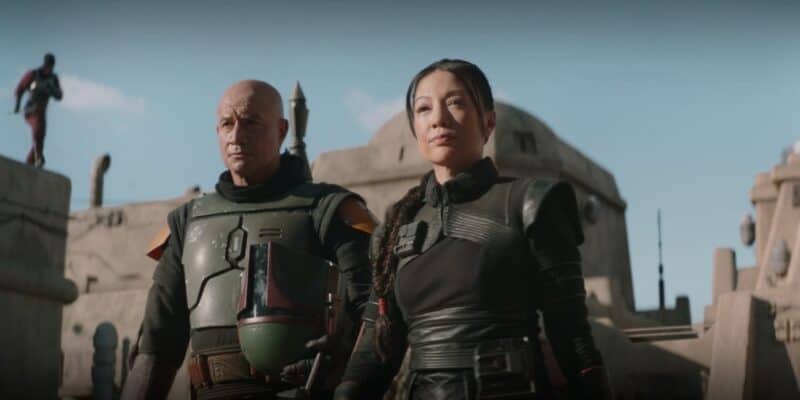 The Book of Boba Fett has finally jetpacked into our lives. After a long, long wait, the series teased at the end of The Mandalorian Season 2 has launched with a bang. Bringing back Jango Fett actor, Temuera Morrison, as Boba Fett and Ming-Na Wen as the mercenary Fennec Shand, The Book of Boba Fett is set to give answers in Fett’s story thus far (including his survival from the Sarlacc pit).

Yet, amid all the onscreen excitement and drama, there’s another conundrum happening in real life that involves everyone’s new favorite bounty hunter.

Ming-Na Wen first appeared as the elite assassin, Fennec Shand, in Jon Favreau’s The Mandalorian, specifically “Chapter 5: The Gunslinger”. After her apparent death, the new bounty hunter returned alongside Morrison’s debut as Boba Fett and Pedro Pascal’s Din Djarin in Robert Rodriguez’s “Chapter 14: The Tragedy” in The Mandalorian Season 2, as well as in the finale, “Chapter 16: The Rescue”. Wen has been vocal over her excitement of being part of Star Wars — from being thrilled to work with Luke Skywalker actor Mark Hamill to discovering she grew up in the same town as Lucasfilm’s Executive Creative Director, Dave Filoni.

Wen, who is also known as voicing the title character in Disney’s Mulan (1998), was not aware that her character Fennec Shand would return to the galaxy far, far away after her first appearance but it seems Lucasfilm has big plans for the now fan-favorite character after she also voiced Shand’s animated version in Filoni’s The Bad Batch.

And speaking of Mulan, it is this that has Wen dealing with a big Disney+ issue.  Taking to Twitter, the Star Wars actress made it clear she could not pick between her iconic Disney hero or her new bounty hunter character.

I’m so torn here! Mulan or Fennec avatar on @disneyplus.

I’m so torn here! Mulan or Fennec avatar on @disneyplus.

The tweet garnered a lot of attention from Wen’s fanbase with the actress eventually setting up a new account in order to feature both of her headlining characters. The Book of Boba Fett is not even one week old and is already causing chaos…

The future is seemingly bright for Wen’s Fennec Shand. The character’s appearance in The Bad Batch alongside Omega (Michelle Ang) — who we know is Boba Fett’s sister — is something that is sure to come into play further down the line, especially as Shand is operating so close to Boba Fett. At this time, Star Wars fans don’t know if Boba Fett knows Omega exists but the timing of The Bad Batch airing just months before The Book of Boba Fett signals Omega’s imminent live-action debut.

The Book of Boba Fett continues on to air on Disney+ on Wednesdays and will see the return of Mandalorian helmers like Rodriguez, Favreau, Filoni, and Bryce Dallas Howard. So far the series has welcomed David Pasquesi (Mok Shaiz’s Majordomo) and Jennifer Beals (Garsa Fwip) alongside Morrison and Wen with characters like Emilia Clarke’s Qi’ra from Rogue One: A Star Wars Story (2016) and The Bad Batch‘s Omega heavily rumored to appear in the forthcoming episodes.

Have you watched The Book of Boba Fett yet? More importantly, are you a Mulan or a Fennec Shand fan? Let us know in the comments down below!