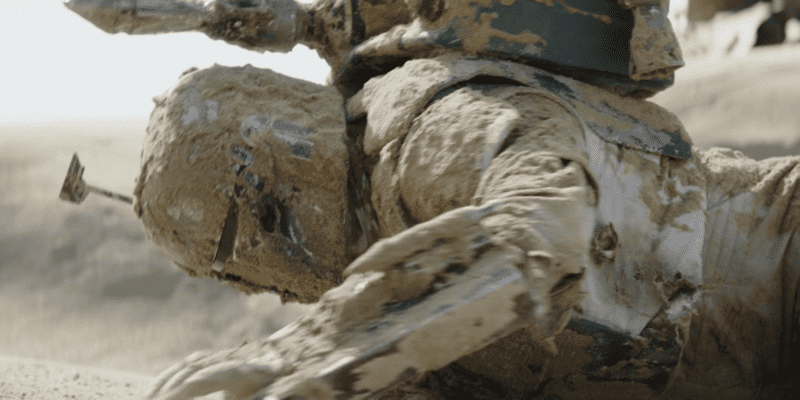 For many Star Wars fans, there is one question that reigns supreme within the Star Wars franchise — how did Boba Fett escape from the Sarlacc pit?

After the legendary bounty hunter fell into the Great Pit of Carkoon in Star Wars: Episode VI – Return of the Jedi (1983) — while attempting to capture Han Solo (Harrison Ford) and battling Jedi Knight Luke Skywalker (Mark Hamill), Princess Leia (Carrie Fisher), and Chewbacca (Peter Mayhew) along the way — he was, not surprisingly, presumed dead.

After all, no known victim had ever survived a fall into a Sarlacc pit.

Thanks to numerous canon sources like The Mandalorian Season 2 and the “War of the Bounty Hunters” comic book crossover event with Marvel Comics, however, Star Wars fans have known for some time that Fett did, in fact, make it out of the Sarlacc pit alive (and mostly intact, other than the pesky non-canon Sarlacc cancer he has in some Star Wars Legends materials).

**SPOILERS FOR THE BOOK OF BOBA FETT SEASON 1, EPISODE 1 (“Chapter 1: Stranger In a Strange Land”) BELOW**

Now, The Book of Boba Fett has finally dropped on the Disney+ streaming platform, and the series wasted no time in returning to the original trilogy era.

Jon Favreau, Dave Filoni, and showrunner Robert Rodriguez have done a masterful job with the flashback sequences, organically blending them into the “next chapter” in The Mandalorian saga — whenever Fett (Temuera Morrison) is in his bacta tank (perhaps curing the Sarlacc cancer if it is, in fact, now canon), he sees visions of his life a few years earlier, with the Sarlacc scene prominently featured.

The running theory for many years has been that Fett’s Mandalorian beskar armor somehow saved him from the Sarlacc’s paralyzing neurotoxins, which ultimately cause victims — like the unfortunate stormtrooper Fett encounters [below] — to be digested bit by bit over the course of a thousand years.

As it turns out, while Fett’s famous green armor may have provided him with some measure of protection, the Kaminoan clone didn’t mess around — he literally punched his way through the creature’s intestines, used a flamethrower to escape, and catapulted himself out of the Sarlacc’s innards and back onto the sands of Tatooine.

Although, in some regards, remaining inside the Sarlacc pit may have been preferable to what befell Fett after his daring escape. He was stripped of his armor by Jawas — officially explaining how Mos Pelgo Marshal Cobb Vanth (Timothy Olyphant) ended up with it in The Mandalorian Season 2, Chapter 1 (“Chapter 10: The Marshal”) — and subsequently kidnapped by Tusken raiders.

With just a 39-minute runtime, the premiere episode of The Book of Boba Fett featured a great deal of setup for the next six episodes of the series, but we did see various players in the Tatooine underworld pay fealty to “Lord Fett” — with Fennec Shand (Ming-Na Wen) by his side — as he sat on Jabba the Hutt’s throne.

As the show continues over the next month and a half, Star Wars fans are expecting cameos from a number of popular Star Wars characters, such as Grogu (AKA “Baby Yoda”), Emilia Clarke’s Qi’ra and Crimson Dawn, Pedro Pascal’s Djarin,  Olyphant’s Vanth, and, of course, a young Han Solo — CGI, of course — but, Rodriguez, Favreau, and their team unsurprisingly have yet to confirm any details regarding special appearances by Star Wars fan-favorites.

Have you watched The Book of Boba Fett yet?