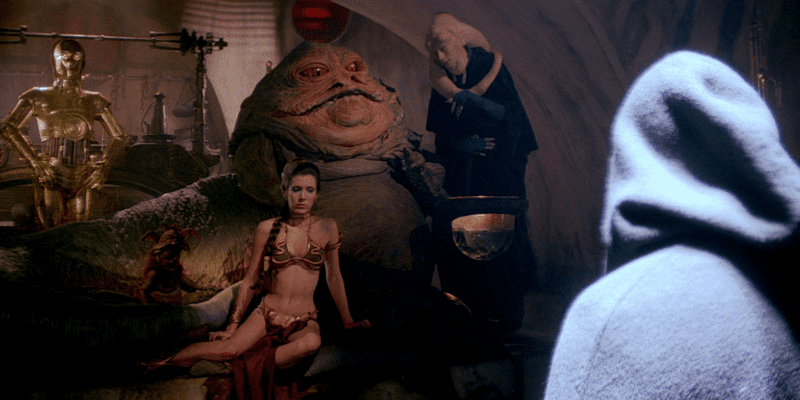 Star Wars fans know that Jabba the Hutt was a ruthless crime lord — that much becomes clear in Star Wars: Episode V – The Empire Strikes Back (1980) and Star Wars: Episode VI – Return of the Jedi (1983) when the sluglike crime boss stops at nothing to have Han Solo (Harrison Ford) brought back to his palace on Tatooine so he can collect an unpaid debt, you know, by encasing the Millennium Falcon pilot in carbonite.

Eventually, of course, Jabba dies at the hands of Princess Leia (Carrie Fisher) while she and Jedi Knight Luke Skywalker (Mark Hamill) launch a daring rescue mission to save Solo.

Recently, though, the Star Wars franchise has been exploring Jabba’s life and times before he met his demise and we’re learning a lot about the monsters he loved to have at his disposal for, well…execution…purposes.

The infamous rancor scene in Jabba’s palace [above] is burned into most Star Wars fans’ minds, for example, and who can forget watching Boba Fett fall into the Sarlacc pit?

Now, Star Wars comic writers have given us more insight into Sarlaccs than we’ve ever had before and, as it turns out, they’re not only terrifying but also the force (pun intended, of course) behind the deadliest weapons in the Star Wars galaxy.

In the new “Star Wars: Life Day #1″ issue, we catch up with Han Solo and Chewbacca during a visit to Black Spire Outpost on Batuu — yes, the very same outpost from Star Wars: Galaxy’s Edge at Walt Disney World Resort and Disneyland Resort — to celebrate Life Day.

Unfortunately, the crime syndicate Kanjiklub, who gained notoriety in the Outer Rim territories after the Battle of Endor, show up to wreak havoc. During the battle, Solo experiences several flashbacks related to Life Day (though we are mercifully spared from reliving the 1978 Star Wars Holiday Special).

During one flashback scene by Steve Orlando, Paul Fry, Alex Sinclair, and Ariana Maher, however, we do learn how Jabba the Hutt weaponized Sarlaccs.

In the panel above, you can see Chewie and Han as they obtain explosives for Jabba from a group of Trandoshans — that’s the same species as Cid (Rhea Perlman) from Dave Filoni’s Star Wars: The Bad Batch if you’re keeping track — on the planet Lessa-7.

One of the Trandoshans shares this shocking information with the unsuspecting duo, “Welcome to the gullet. From here, we mine and refine the sector’s most powerful chemical weapons…stolen from the gut of a sedated Sarlacc. Still sleeping or not, she has to eat….”

As fans undoubtedly know already, Sarlaccs kill by injecting their victims with paralyzing neurotoxins, then subsequently digesting them bit by bit over the course of a thousand years. So, although, this is the first time Star Wars has confirmed the weaponization of Sarlaccs, it makes perfect sense that their innards would make ideal chemical weapons.

Only one Sarlacc victim is known to have survived the infamous Sarlacc in the Great Pit of Carkoon — iconic bounty hunter Boba Fett.

Now played by Temuera Morrison, Fett is about to return in his own series for the first time. The Book of Boba Fett — billed as “the next chapter” of Jon Favreau and Filoni’s Mandalorian saga — is set to debut on Disney+ on December 29, 2021.

Although details about the series are scant, Favreau has shared that Morrison’s Fett, for the first time in his storied bounty hunting career, will be relying on others as he attempts to build a crime syndicate of his own following he and Fennec Shand’s (Ming-Na Wen) takeover of Jabba’s palace — after unceremoniously killing Bib Fortuna (Michael Carter) — in The Mandalorian Season 2 finale episode post credits scene.

When Fett reemerges in The Book of Boba Fett, fans are expecting cameos from a number of popular Star Wars characters, such as Emilia Clarke’s Qi’ra and Crimson Dawn from Solo: A Star Wars Story (2018), Pedro Pascal’s Din Djarin, Timothy Olyphant’s Marshal Cobb Vanth, and, of course, a young original trilogy-era Han Solo — CGI, of course — production executives, including showrunner Robert Rodriguez, have yet to confirm any details regarding special appearances by Star Wars fan-favorites.

Do you think we’ll finally learn how Boba Fett survived the Sarlacc pit?