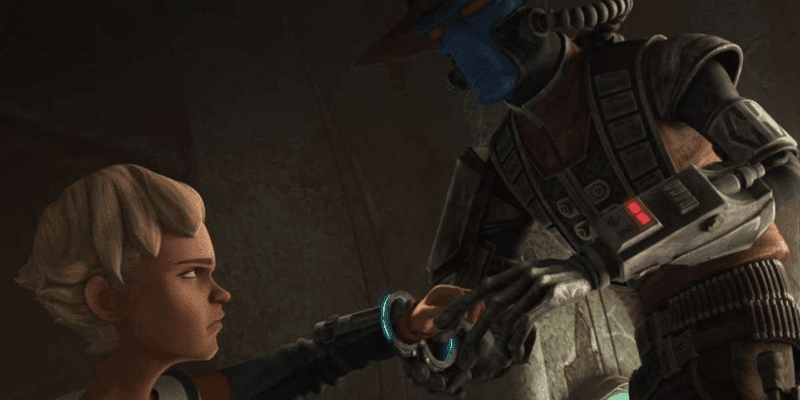 When Dave Filoni’s latest foray into animation, Star Wars: The Bad Batch, was announced, fans were expecting a continuation of the four-episode Clone Force 99 story arc from Filoni’s other series, Star Wars: The Clone Wars — you know, the show that gave us Ahsoka Tano (Ashley Eckstein).

What we weren’t necessarily expecting when we met up with Hunter, Crosshair, Tech, Echo, and Wrecker (all voiced by Dee Bradley Baker), again, however, was a father-child relationship that rivals The Mandalorian‘s Din Djarin (Pedro Pascal) and Grogu (AKA “Baby Yoda”).

Yet, that’s exactly what we got. And, little Omega — a young female clone the elite squad of clone troopers encountered on Kamino after returning from the chaos of Order 66 on Kaller — has stolen not just Hunter and Wrecker’s hearts, but fans’ too.

Now, in this week’s Episode 9 (“Bounty Lost”), we’ve seen the return of another bounty hunter — Fennec Shand (Ming-Na Wen) is back, and she actually tries to help Omega escape from Bane’s clutches — and we’ve discovered the biggest reveal of all, Omega is actually Boba Fett’s “sister”.

That’s right, Omega and Boba — formerly known as “Alpha”, we learned — were both cloned from the original strain of Jango Fett’s DNA.

This makes them both first-generation clones, unlike most of the Clone Army of the Republic soldiers we encounter in the Star Wars universe, including the “defective” clone trooper characters in Clone Force 99.

The implication here, of course, if you know your Greek alphabet, is that Omega was the last clone created from this original DNA sample, while Boba was the first.

Given what we know about Boba Fett’s presumed age in the original trilogy and, more recently, in Jon Favreau and Filoni’s The Mandalorian, we know that he is already an adult during The Bad Batch era. This means that Omega was either cloned years after Boba from preserved DNA, or she is aging at an entirely different rate than her clone trooper brethren.

Regardless of how exactly Omega came to be, she is of massive value to the Kaminoans who, clearly, stopped at nothing in their desperate attempt to get her back amid Emperor Palpatine and Governor Tarkin’s takeover.

To that end, it also seems like Filoni is setting her up to be a major part of his corner of the Star Wars franchise moving forward.

We know that the first Mandalorian spinoff, The Book of Boba Fett — which is being hailed as “The Mandalorian Season 2.5″ — has finished filming, and it seems that there’s a viable chance we could see Omega make an appearance. We seem to be hurtling toward an inevitable Boba Fett cameo in The Bad Batch, so the two “siblings” are likely to meet sooner rather than later.

We also don’t know much about Boba’s life between the early days of Imperial rule and his original appearance in Star Wars: Episode V – The Empire Strikes Back (1980), or between the original trilogy and The Mandalorian‘s place in the Star Wars timeline about five years later. All this to say, Fett could have certainly maintained a relationship with Omega that the Star Wars fan base would know nothing about (until now).

By the time The Book of Boba Fett takes place, about 30 years later, Omega may very well be a respected bounty hunter in her own right — or, she could have an entirely different career that serves Fett and Shand’s purposes during their time on Tatooine.

Suffice it to say, it’s unlikely to say that we’ve seen the last of Omega — she may even help to explain Supreme Leader Snoke and Grogu’s existence…

Would you like to see a live-action version of The Bad Batch‘s Omega?