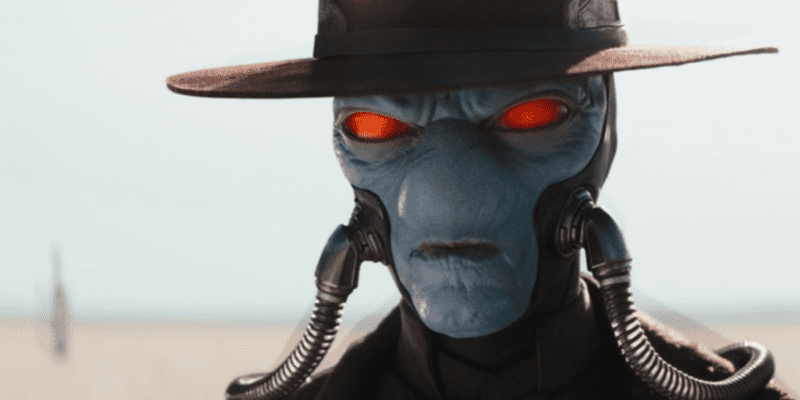 **SPOILERS FOR THE BOOK OF BOBA FETT SEASON 1, EPISODE 6 BELOW**

The Book of Boba Fett just went to all new heights with Dave Filoni’s tear-jerking, out-of-this-world, altogether “wizard” episode of this mastermind Star Wars franchise — throwing in more cameos than a Jedi Master (or Padawan) could dodge. But, THE moment of this latest Star Wars episode is breaking the internet, and fans are losing it over Dave Filoni, Jon Favreau, and Lucasfilm as a whole.

Once again, Din Djarin/The Mandalorian (Pedro Pascal) steals the show, further cementing that The Book of The Mandalorian is what every Star Wars fan is living for at the moment, especially with the stunning visuals audiences witnessed between Luke Skywalker (Max Lloyd-Jones), Grogu, and, not to mention, Ahsoka Tano (Rosario Dawson).

But, none of these Star Wars characters top the introduction of a lifetime in episode six of The Book of Boba Fett: Cad Bane (Corey Burton).

The internet is buzzing, breaking, overflowing with fans reactions to Cad Bane’s epic, western-perfection entrance as he strolls into this Star Wars universe in Free Town to have a word with Marshal Cobb Vanth:

Cobb Vanth vs Cade Bane might be one of two maybe three scenes in the entirety of these two shows that has been actually interesting and compelling to watch.

Cobb Vanth vs Cade Bane might be one of two maybe three scenes in the entirety of these two shows that has been actually interesting and compelling to watch.

TikTok and Instagram influencer Andrew of @AndrewsVisual expresses what every fan is feeling:

The way I was jumping up in down in my bed #BookofBobaFett Cad Bane is here!!

The way I was jumping up in down in my bed 🤯🤯🤯#BookofBobaFett Cad Bane is here!! pic.twitter.com/DGf9aQIBxX

Fans are putting it best; Cad Bane is TERRIFYING in live-action. In the best way possible, the live-action version of this legendary Clone Wars bounty hunter instills the fear of death in someone before he even goes for his blaster (which he did!).

Tying in Lawrence of Arabia (1962), The Seven Samurai (1954), and The Good, The Bad, and The Ugly (1966) in just three minutes of screentime in this episode with Cad Bane and Cobb Vanth at the center of a standoff was some of the best Star Wars audiences have seen in recent time, as many fans previously mentioned above.

And, in case you’re wondering, that was Corey Burton’s iconic voice for Cad Bane. Who else could voice this character? No one!

Fans aren’t done with this latest episode, with rumors that Solo: A Star Wars Story (2018) star Qi’ra (Emilia Clarke) and even bounty hunter Bossk could appear in the series finale next week!

The Book of Boba Fett chronicles the integral parts that take place in the adventure of this legendary bounty hunter between Return of the Jedi and The Mandalorian season two, when fans see an aged, more rugged version of the clone that’s been through a world of pain.

What were your reactions to this episode? Let us know in the comments below!