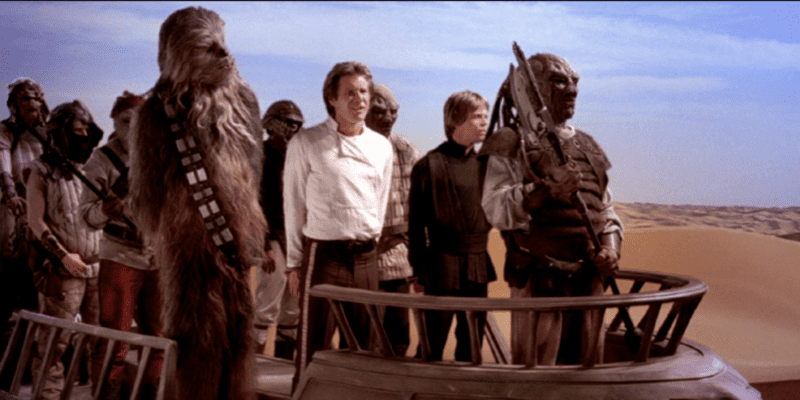 The scene saw Shand and Fett storm Jabba the Hutt’s palace — where Bib Fortuna (Michael Carter) now sat on the throne — ultimately killing Fortuna and taking Mos Espa for themselves. Now, in Mandalorian spinoff, The Book of Boba Fett, Star Wars fans are finally getting answers to some decades-old questions within the Star Wars galaxy.

Fett’s first standalone series is set during The Mandalorian timeline, about five years after the events of George Lucas’s Star Wars: Episode VI – Return of the Jedi (1983). This means, of course, that the Sarlacc pit incident still weighs on everyone’s mind (especially Fett’s).

While showrunners Robert Rodriguez, Jon Favreau, and Dave Filoni have already explained how Fett escaped from the Great Pit of Carkoon, we now know that he returned to the location on another occasion, in search of his famous Mandalorian beskar armor.

Thanks to numerous canon sources like The Mandalorian Season 2 and the “War of the Bounty Hunters” comic book crossover event with Marvel Comics, however, Star Wars fans have known for some time that Fett did, in fact, make it out of the Sarlacc pit alive (and mostly intact, other than the pesky non-canon Sarlacc cancer he has in some Star Wars Legends materials).

**SPOILERS FOR THE BOOK OF BOBA FETT SEASON 1, EPISODE 4 (“Chapter 4: A Gathering Storm”) BELOW**

In the fourth installment of The Book of Boba Fett, fans are given a glimpse at how Shand and Fett initially teamed up following her injuries in The Mandalorian Season 1, Episode 5 (“Chapter 5: The Gunslinger), in which she had an unfortunate encounter with Pascal’s Djarin and a novice bounty hunter Toro Calicon (Jake Cannavale).

As it turns out, after Shand received the modifications that saved her life, she and Fett stole back his starship, Firespray  (formerly known as Slave I) and returned to the pit in a bid to obtain the aforementioned armor. The beskar, of course, was not there — it may have already been in the possession of Marshal Cobb Vanth (Timothy Olyphant) by this point — but, in the process of escaping from the creature, Fett and Shand destroyed it once and for all.

The Sarlacc’s tentacles wrapped around the ship and Shand, quite literally, dropped a bomb into its mouth, killing the Star Wars icon.

This gives a definitive end to the Great Pit of Carkoon saga, closing the door on what, exactly, happened to the infamous creature.

As for what’s coming in the second half of the seven-episode season, fans are still expecting a number of other cameos moving forward.

Grogu is reportedly set to appear, for example, and many fans are also hoping for cameos by Timothy Olyphant’s Marshal Cobb Vanth, and, of course, Harrison Ford’s Han Solo — CGI, obviously — but Rodriguez, Favreau, and Filoni have remained characteristically tight-lipped regarding special appearances by Star Wars fan-favorites.

Do you like that the Sarlacc saga has finally gotten closure in the Star Wars universe?