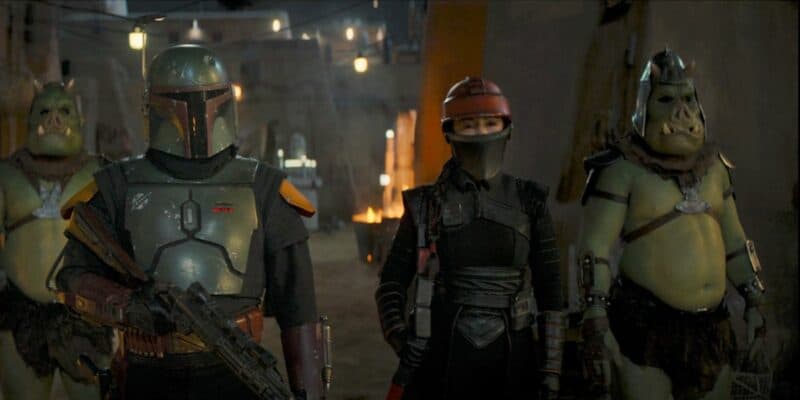 In The Mandalorian Season 2, Episode 3 (“Chapter 13: The Siege”), a jeans-wearing crew member was hilariously left in a scene with Din Djarin (Pedro Pascal), Cara Dune (Gina Carano), and Carl Weathers (Greef Karga) during the editing process. Although the production team member was ultimately removed from the shot, Star Wars fans still remember the gaffe and laugh about it today.

Now, Jon Favreau and Dave Filoni’s next project set in a galaxy far, far away is airing and eagle-eyed fans have spotted another mistake, very similar to the infamous “jeans guy” error.

From feeling like “nothing happened” in the first episode — although the Sarlacc pit incident was finally cleared up 38 years later — to finding the plot “more compelling than The Mandalorian“ in the second installment, fans have not yet landed on a cohesive opinion regarding The Book of Boba Fett overall.

In Episode 3, for example, director and showrunner Robert Rodriguez deigned to introduce a biker gang that has befuddled just about everyone. Many have compared the street youth to “Power Rangers” and their introduction left much to be desired in most Star Wars fans’ minds.

However, their street chase scene has given rise to the aforementioned amusing mistake — TikTok user tansolobf2 noticed that an unfinished corner of the set is clearly visible during the sequence, which takes place on the streets of Mos Espa, the Tatooine spaceport where Boba Fett (Temuera Morrison) and his righthand woman, Shand, have taken control of Jabba the Hutt’s palace after killing Bib Fortuna (Michael Carter).

While mistakes certainly happen during the editing process on many movies and television series, this is a somewhat comical error in a show that is doing its best to fully immerse viewers in another world.

In addition to the introduction of the “street youths” and their droid body parts — who will seemingly play a key role in the second half of the seven-episode season — fans are still expecting a number of other cameos moving forward.

Grogu is reportedly set to appear, for example, and many fans are also hoping for cameos by Timothy Olyphant’s Marshal Cobb Vanth, and, of course, Harrison Ford’s Han Solo — CGI, obviously — but Rodriguez, Favreau, and Filoni have remained characteristically tight-lipped regarding special appearances by Star Wars fan-favorites.

Do you like The Book of Boba Fett so far? Did you notice this “jeans guy” style error?