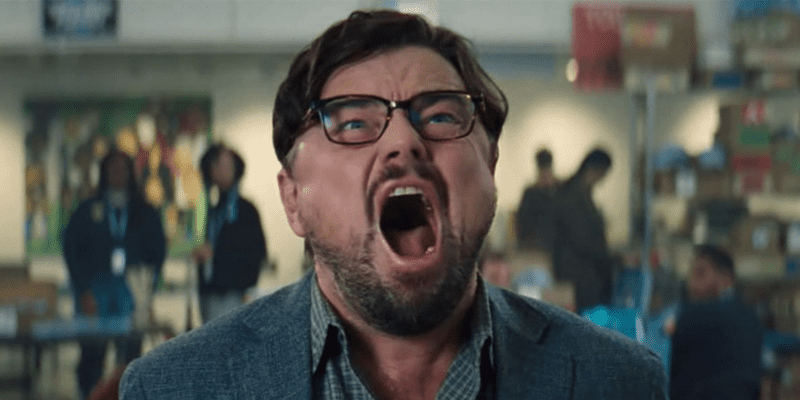 2021 was filled with streaming brand new movies at home, with streaming platforms like Disney+ and Netflix leading the way. While The Mandalorian took over 2020 with The Child and Din Djarin (Pedro Pascal), fans noticed a massive goof in one of the series best episodes. Following their footsteps, Netflix failed to learn from Star Wars’ best gaffe in Don’t Look Up (2021).

Eagle-eye fans remember spotting a crew member in the background of Raiders of the Lost Ark and Pirates of the Caribbean: Curse of the Black Pearl during crucial moments in the films. Fans of Game of Thrones were appalled when a coffee cup was spotted in the background of the series finale, and the goof turned into an internet sensation.

Now, it appears that Netflix’s Don’t Look Up (2021) sports its infamous gaffe in the movie:

At the one-hour and 28-minute mark of the Leonardo DiCaprio and Jennifer Lawrence original film, viewers spotted not just one crew member but the ENTIRE crew of Don’t Look Up in a montage of scenes:

Related: The Rise of Skywalker could be the longest Star Wars movie ever

This, of course, calls back to the “Jeans Guy” in Chapter 12: The Siege of Dave Filoni and Jon Favreau’s The Mandalorian season two.

At approximately 18:53 into that episode, you can spot a jeans-wearing crew member in the background as Carl Weathers’s Gree Karga, Gina Carano’s Cara Dune, and Pedro Pascal’s Din Djarin storm an “abandoned” Imperial Base on the planet of Nevarro.

Good eye! We left that blip of the crew in on purpose to commemorate the strange filming experience.

Good eye! We left that blip of the crew in on purpose to commemorate the strange filming experience. #DontLookUp https://t.co/7W4EpkHm3V

Unlike McKay, the Mouse House digitally removed the not-so-incognito crew member from The Mandalorian in the re-edit of the award-winning series.

Don’t Look Up has received mixed reviews from critics and audiences since its release in December 2020. Here’s an official description of the Netflix film:

Kate Dibiasky (Jennifer Lawrence), an astronomy grad student, and her professor Dr. Randall Mindy (Leonardo DiCaprio) make an astounding discovery of a comet orbiting within the solar system. The problem: it’s on a direct collision course with Earth. The other problem? No one really seems to care. Turns out warning mankind about a planet-killer the size of Mount Everest is an inconvenient fact to navigate. With the help of Dr. Oglethorpe (Rob Morgan), Kate and Randall embark on a media tour that takes them from the office of an indifferent President Orlean (Meryl Streep) and her sycophantic son and Chief of Staff, Jason (Jonah Hill), to the airwaves of The Daily Rip, an upbeat morning show hosted by Brie (Cate Blanchett) and Jack (Tyler Perry). With only six months until the comet makes impact, managing the 24-hour news cycle and gaining the attention of the social media obsessed public before it’s too late proves shockingly comical — what will it take to get the world to just look up?!

On the other hand, Chapter 12, The Seige, of The Mandalorian is one of the most praised installments in the Star Wars story, with actor Carl Weathers (Greef Karga) stepping behind the camera for this action-packed adventure.

Here’s an official synopsis of the episode:

The Mandalorian and the Child head to Nevarro after the Mon Calamari repairs to the ship proved inadequate. They reunite with Greef Karga and Cara Dune there, who have since turned the planet around. Cara has become the local marshal, while Greef has taken on the role of magistrate, assisted by the unnamed Mythrol taken by the Mandalorian in Chapter 1. In return for the repairs, The Mandalorian agrees to help destroy an old Imperial base on the other side of the planet.

Every Star Wars fan better buckle of for season three of The Mandalorian, rumored to debut at the end of 2022. Before then, fans are anticipating watching the limited series Kenobi (2022) and Andor (2022), as well as The Book of Boba Fett (2021) and more from the Star Wars franchise and Star Wars universe!

Did you notice this goof in Don’t Look Up and in The Mandalorian? Let us know in the comments below!