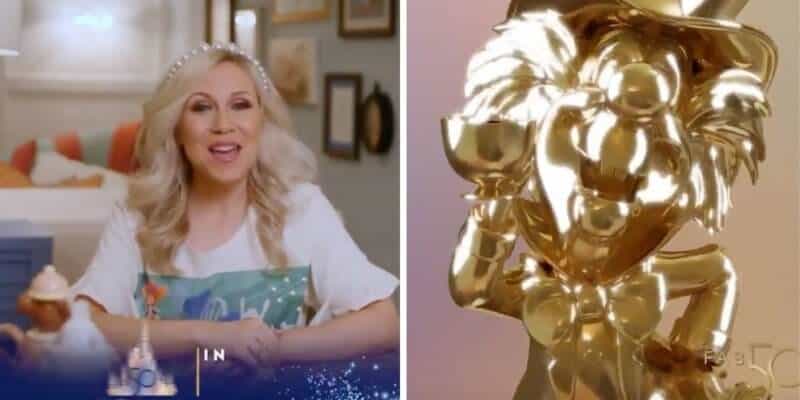 As Disney World continues to gear up for the world’s most magical celebration — their 50th anniversary — more breadcrumbs and teasers are being released based on what Guests can expect to see.

One of the new decor experiences coming to Magic Kingdom, EPCOT, Disney’s Hollywood Studios, and Disney’s Animal Kingdom is the Disney Fab 50 Character Collection! There will be a collective total of 50 golden statues across all four parks, which will be able to interact with Guests.

These eight friends will also be featured in special golden character sculptures debuting Oct. 1 at Magic Kingdom Park; in this artist rendering, you can see Mickey and Minnie shining in the sunlight near Cinderella Castle. There will be 50 characters total in this series of sculptures that will be displayed across all four theme parks. We’ll soon reveal more of the “Disney Fab 50” as excitement builds for the big day, as well as the surprising ways you’ll be able to interact with these beautiful sculptures as part of the 50th anniversary celebration.

Since the initial announcement, Disney has continued to slowly release the other sculptures Guests can expect to see during the 50th anniversary, such as the Cheshire Cat from Alice in Wonderland. Now, joining team Wonderland, Disney has confirmed that the Mad Hatter will have his very own sculpture!

Walt Disney World (@WaltDisneyWorld) Tweeted out a video starring Ashley Eckstein, creator of clothing line Her Universe and voice of Ahsoka Tano within the Star Wars franchise. Eckstein is a major Alice in Wonderland fan, so she is a perfect choice to bring this exciting news to Disney fans!

Ashley Eckstein, lifelong fan of @DisneyAnimation’s Alice in Wonderland announced that the Mad Hatter will soon be part of the “Disney Fab 50 Character Collection” at the #WaltDisneyWorld Resort during “The World’s Most Magical Celebration” starting October 1 #DisneyWorld50

Ashley Eckstein, lifelong fan of @DisneyAnimation’s Alice in Wonderland announced that the Mad Hatter will soon be part of the “Disney Fab 50 Character Collection” at the #WaltDisneyWorld Resort during “The World’s Most Magical Celebration” starting October 1 #DisneyWorld50 pic.twitter.com/vbgf1TnqiA

As we continue to move closer towards October 1, we will surely get to continue collecting these exciting 50th anniversary breadcrumbs when it comes to what characters we can expect to see during the celebration!

What Disney character do you think deserves a golden sculpture? Let us know in the comments below!