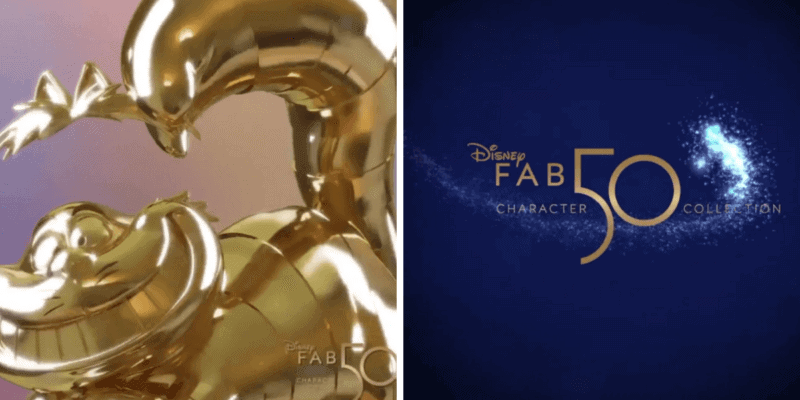 Disney World is gearing up for its 50th anniversary celebration. Starting on October 1, this 50th anniversary will be represented around the Resort by 50 fabulous characters from some of Disney and Pixar’s most beloved stories.

Today, August 8, Disney revealed that the Cheshire Cat will be joining the Fab 50!

Jeff Vahle, president of the Walt Disney World Resort, took to Instagram with the help of some fantastic Fantasyland Cast Members to announce this special statue.

The Cheshire Cat will join other characters such as Pooh and Piglet, Dante, Timon and Pumbaa, and many others to create a stunning display of golden statues in honor of Walt Disney World’s 50th anniversary milestone:

It was my pleasure to join Ben and LaTara to reveal that Cheshire Cat is part of the “Disney Fab 50 Character Collection” you’ll soon find across the four @WaltDisneyWorld theme parks. Remember, “The World’s Most Magical Celebration” starts October 1!

Fans have been loving each and every announcement, and since there will be 50 characters in total, we still have plenty more to come!

Cinderella Castle has been beautifully decorated ahead of the 50th anniversary celebrations and Magic Kingdom will receive a brand-new fireworks show called Disney Enchantment, which you can read more about here.

Over at EPCOT Disney will be opening the highly anticipated Remy’s Ratatouille Adventure attraction on October 1. EPCOT will also debut a new nighttime spectacular called, HarmonioUS.

Mickey Mouse and all of his pals will be sporting new outfits in the EARidescent color scheme, which is the royal blue, purple, and golden colors that can be seen through the Resort as part of the 50th celebration.

There is so much to look forward to for Disney World’s 50th anniversary! Be sure and stay tuned to Inside the Magic for the latest details on the big celebration.

Let us know what character you want to see added to the Fab 50 lineup in the comments below!