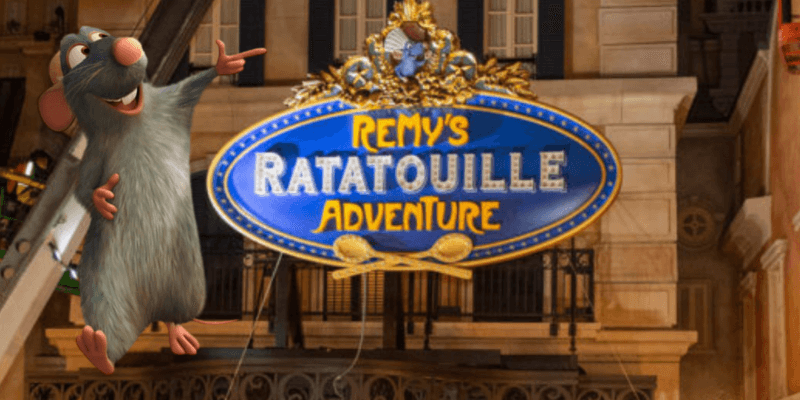 The attraction is nestled in a newly expanded section of the France Pavilion in World Showcase which is opening at the same time as the attraction. The new expansion includes a brand new quick-service location, bringing delicious French crepes to the World Showcase.

During the Walt Disney Company’s Shareholder’s meeting, CEO Bob Chapek announced Remy’s Ratatouille Adventure will be opening on October 1, 2021. This new attraction will open alongside the new courtyard that is an expansion to the France Pavilion in EPCOT’s World Showcase.

October 1, 2021, is the date of the 50th Anniversary and will be the kick-off of a celebration that will last for over a year at the resort!

Here is what Disney had to say about the upcoming grand opening of Remy’s Ratatouille Adventure:

Just Announced! Remy’s Ratatouille Adventure will open at EPCOT on Oct. 1, 2021 to help kick off the opening season of the
@WaltDisneyWorld Resort 50th Anniversary celebration. Get more details on the Disney Parks Blog: https://bit.ly/3t0e7r5 #DisneyWorld50

Just Announced! Remy’s Ratatouille Adventure will open at EPCOT on Oct. 1, 2021 to help kick off the opening season of the @WaltDisneyWorld Resort 50th Anniversary celebration. Get more details on the Disney Parks Blog: https://t.co/ZZydSZ3IpY #DisneyWorld50 pic.twitter.com/cI7OU9TyX4

Everyone’s favorite “Little Chef” is cooking up something really big for Walt Disney World Resort’s 50th anniversary, because the grand opening of Remy’s Ratatouille Adventure at EPCOT is set for Oct. 1 of this year!

We have been closely following the construction of this exciting new expansion of the World Showcase at EPCOT, and the Remy attraction. If you are a big Disney parks fan you may recognize this attraction as a similar version to the Disneyland Paris attraction of the same name. In fact, Imagineers previously stated that the biggest difference between the two attractions is the expansive courtyard that can be found at the Walt Disney World version.

Disney has been slowly introducing Remy into EPCOT for several years now and so he is already a staple of the theme park. One example is that in 2020, as well as in years past, Remy was the star of his very own, “Hide & Squeek” scavenger hunt around World Showcase.

We are certain that we will continue to see more and more of Remy integrated around EPCOT now that the new attraction is open to Guests.

If you just can’t wait to say ‘bonjour’ to Remy and want to see a sneak peek of the attraction at EPCOT, you can watch this ride through of the Disneyland Paris Remy’s Ratatouille Adventure attraction here!

Are you excited for the grand opening of Remy’s Ratatouille Adventure? Let us know your thoughts about the attraction in the comments!

Let us help you plan a trip to Walt Disney World to experience everything new and exciting, click here for more information!