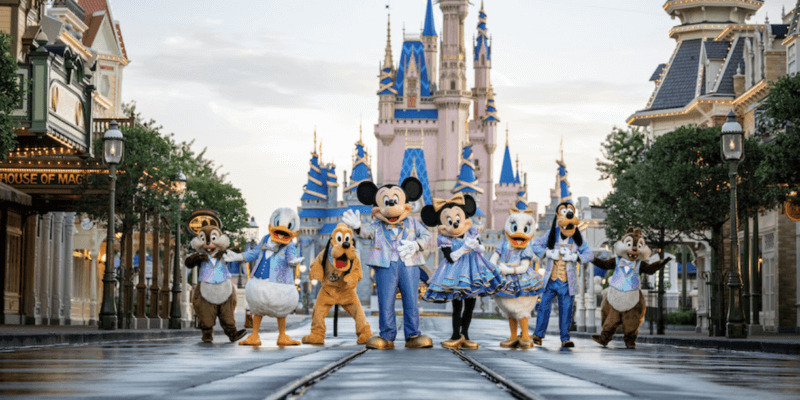 GMA shared a Tweet about the exciting new announcements:

@WaltDisneyWorld is kicking off its 50th anniversary with the return of its fireworks show and other exciting festivities, along with welcoming some special “Magic Makers” as guests.

.@WaltDisneyWorld is kicking off its 50th anniversary with the return of its fireworks show and other exciting festivities, along with welcoming some special "Magic Makers" as guests.#DisneyWorld50#DisneyMagicMakers@Ginger_Zeehttps://t.co/lErIYeeVsX pic.twitter.com/DhuTZJndot

And, now, there’s even more to look forward to! One of today’s most exciting announcements was the fact that Guests will be able to enjoy the first-ever interactive character statues featuring beloved Disney Parks characters.

These eight friends will also be featured in special golden character sculptures debuting Oct. 1 at Magic Kingdom Park; in this artist rendering, you can see Mickey and Minnie shining in the sunlight near Cinderella Castle. There will be 50 characters total in this series of sculptures that will be displayed across all four theme parks. We’ll soon reveal more of the “Disney Fab 50” as excitement builds for the big day, as well as the surprising ways you’ll be able to interact with these beautiful sculptures as part of the 50th anniversary celebration.

50 characters sculpted in gold will appear at Walt Disney World later this year as part of The World’s Most Magical Celebration. Two of them – the statues of Mickey Mouse and Minnie Mouse – will be dedicated to our Cast Members past, present and future. After all, our Cast (along with Mickey and Minnie) are truly the heart of the celebration! Here’s a sneak peek of the work in progress.

While we don’t know a lot of details yet, this is certainly an exciting addition for Guests of all ages — it is not yet known how exactly Disney Park-goers will be able to engage with the sculptures, but we know Walt Disney Imagineering has something great up their sleeves for the Resort’s 50th anniversary!

Disney Parks Blog also shared details about the stunning new outfits Mickey and Friends will be wearing for the entire 50th anniversary celebration, which is slated to last for 18 months, into 2023:

Mickey Mouse and Minnie Mouse will be your hosts for “The World’s Most Magical Celebration,” and they’ll be decked out in sparkling new EARidescent fashions for the 50th anniversary. As you can see in the photo above, their best pals want to get in on the shimmer, too, as Donald Duck and Daisy Duck, Goofy and Pluto, and Chip ‘n’ Dale will be sporting their own custom-made EARidescent looks beginning Oct. 1. You’ll get a chance to see them when they travel through Magic Kingdom Park several times daily in the new “Mickey’s Celebration Cavalcade.”

Are you excited to have more fun with Disney characters than ever before during your next Walt Disney World Resort vacation?

The expert team at Academy Travel can help you plan your next magical trip to Disney World, whether you want to visit Star Wars: Galaxy’s Edge or dine at Cinderella’s Royal Table.